The original Overcooked is one of my favourite couch co-op games. Couch co-op gaming is something of a dying breed these days, but there was a game that served up fresh ingredients of fun and hilarity. The sheer delight that comes from everyone working in tandem, each contributing to hit that high score is something I won’t soon forget. Developer Ghost Town Games found a recipe for success and now, two years later, they’re back with Overcooked 2. As one should probably expect from a sequel, Overcooked 2, at its most basic, is just more Overcooked. It might not be the most ambitious sequel out there but like any satisfying meal, coming back for seconds is hardly a bad thing. Fans of the original game will slide back into the cooking groove in no time, while first-time chefs — once they’ve played a few rounds — will find Overcooked 2’s gameplay inviting, addicting, and constantly surprising.

Just like last time, Overcooked 2 is all about preparing, cooking, and delivering various meals as quickly and efficiently as possible in order to, once again, save the Onion Kingdom. While that may sound simple enough, it’s the kitchens themselves that flip things upside down, quite literally at times. Each stage brings something new to the table, sometimes in the form of obstacles designed to trip you up or a new mechanic that shakes up the formula. Rest assured, each level in Overcooked 2 is a treat to play and half the fun is seeing all the creative and zany ways the developer is able to top themselves.

A Recipe for Success

Kitchens are more varied and dynamic this time around too. For example, one level has you cooking on an airship, extinguishing flames scattered around the area, before crash landing in a sushi kitchen bordered with conveyor belts. In another, you’ll be cooking up a storm atop two floating rafts down a river bend that changes positions, or jumping through portals to boil some pasta, or crossing dangerous swamps with bowls of pancake batter in hand. There’s even a psychedelic trip where an entire kitchen suddenly disappears! It can get pretty darn crazy, and while it likes to stray far away from its simple restaurant designs, it allows for a ton more creativity this time around. As mentioned before, seeing how levels evolve, change, and be manipulated is a huge part of the appeal of Overcooked 2 and it helps to elevate it above its predecessor. 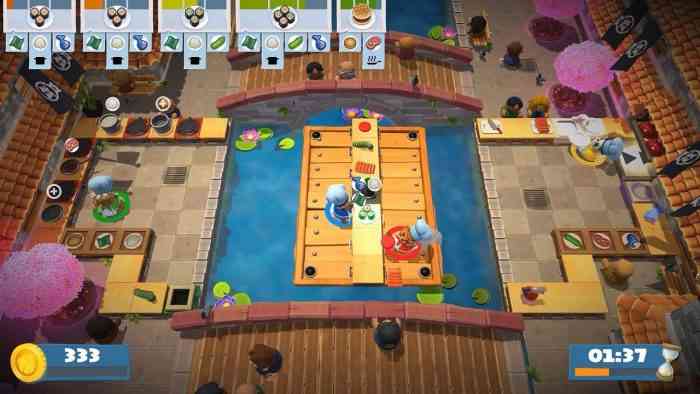 While it’s possible to play by yourself (thanks to a more streamlined approach), it is in no way the recommended option. Playing along with a friend or group is the preferred way to go since much of Overcooked 2’s enjoyment comes from constant communication. Whether that communication is positive or negative is really up to the party but it’s safe to say that your relationships will be tested in Overcooked 2. Snagging one or two stars per level should be doable with a decently-skilled group but nabbing that third star often relies on everyone doing their part, like a well-oiled machine, only with a lot more shouting.

While there are some carryover dishes from the first game like burgers and pizzas, the sequel kicks things up a notch with eight new recipes to cook. While new ones like sushi and pasta are straightforward affairs, it’s the new steamed recipes that will keep you on your toes. You’ll need to chop up meats or veggies, mix in flour, steam them on a stove, then serve them on a plate. In Overcooked 2, there’s a lot more attention to detail to the cooking recipes and even after frequent retries, I still got tripped up keeping track of what needed to get done for each order, which usually resulted in failed orders and loads of comedic moments. Salads now need cucumbers, cheese can go on burgers, cakes can go in the oven or on a pan, and so on. This isn’t at all a complaint because it’s more about my multitasking ability than anything. It definitely took a few attempts to fully grasp how each recipe needed to be constructed, but once you’ve committed them to memory, it’s really satisfying when you’re able to get them done without having to think about them too much. 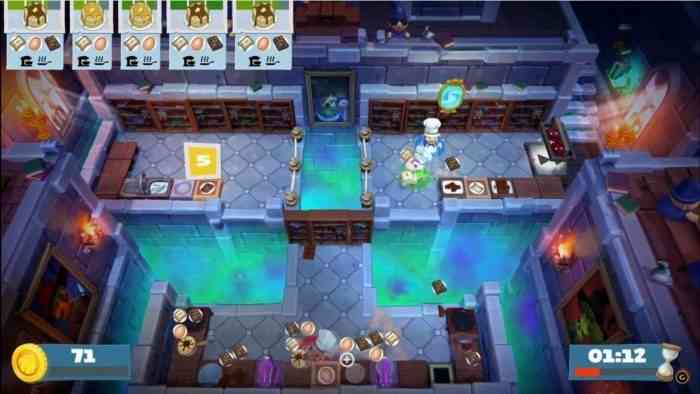 Occasionally, it can be difficult to see all the food items on the screen, especially when you’re dealing with recipes that call for multiple items. It becomes hard to manage when each dish is lined up vertically which means its easy to accidentally put an ingredient on the wrong plate. It might seem like a minor thing, but for a game that relies on speed, memory, and precision, it can heighten one’s frustration.

Compliments to the Chef

New to Overcooked 2 is a combo meter called tips. You’re encouraged to complete dishes in the order they appear at the top of the screen. Doing so will multiply your delivery points which are added at the end as a bonus to your score. This is something you’re going to want to take advantage of if you have the need to hit high scores in later levels. Another useful addition is the ability to throw ingredients either to your partner or straight into pots, pans, friers and cutting boards. Only uncooked food can be tossed around and the mechanic adds a nice layer of strategy that, when utilized properly, can function as a great time saver. Learning to lob ingredients effectively is practically a requirement in certain kitchens and it’s a feature that makes so much sense that it genuinely makes it difficult to go back to the first game. Other quality of life improvements like putting food on a plate carried by your partner help remove some of the tedium of the first game. 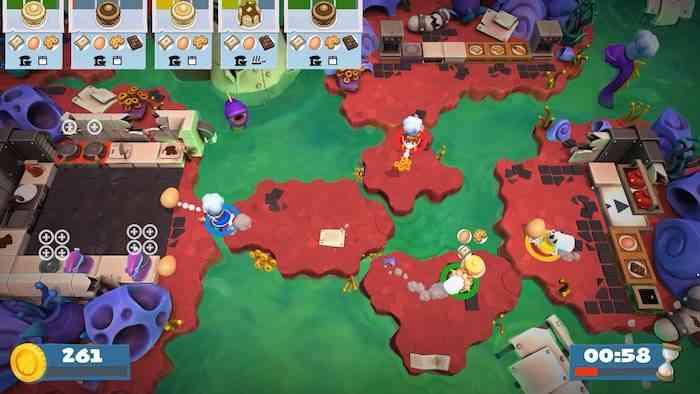 Overcooked 2 still keeps the trend of having a varied cast of playable chefs to choose from. Instead of having them all available from the start, you’ll unlock new ones as you proceed through the game’s story mode. However, it is odd that you aren’t able to select a different chef before each stage like you could in the first Overcooked. Changing your character is now done from the main menu, which means exiting out entirely from the mode you’re in. It’s not a huge dealbreaker, since every chef controls and plays the same, but it would’ve helped break up some frustration that can sometimes crop up after a few hours of play.

Possibly the best new feature of all in Overcooked 2 is the addition of online play. While I think local multiplayer is still the best way to experience the game, having the option to connect with buddies over the internet for some cooking madness is tough to complain about. It also helps that hosting and connecting to games is a breeze and never did I succumb to serious bouts of lag or connection issues. There’s also an Arcade mode and Versus mode to toy around with after completing the 8-10 hour campaign. Arcade mode will more or less perfect be the go-to for parties because it shuffles all of your unlocked stages. Versus, on the other hand, is a great way to test your cooking skills against a friend in even more zanier and chaotic scenarios. Bottom line is that Overcooked 2 crams a lot of content on its plate and no matter how you decide to play, you’ll always have a good time. 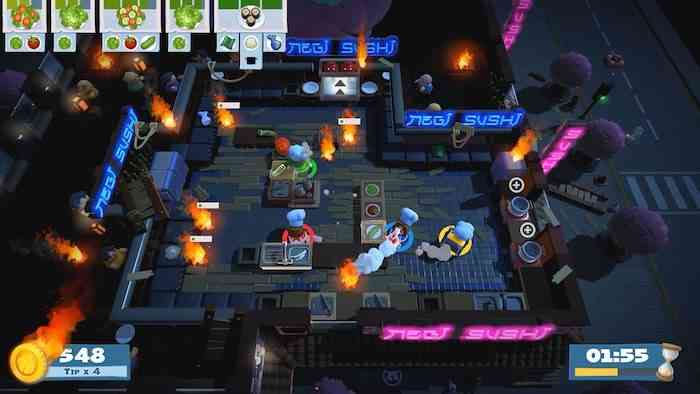 Overcooked 2 takes everything you know and love about the first game and kicks it up a notch to make a more satisfying and plentiful sequel. The kitchens are still the main highlight, boasting an insane amount of creativity and franticness. The new dishes are all great, and the new throwing mechanic, as well as a new combo meter, greatly enhance the overall Overcooked experience. Experienced players will find a lot to love here, while newcomers can enjoy its simple design and pick-up-and-play controls. Overcooked 2 takes an already tasty recipe, throws in a few new ingredients, and presents itself on a more attractive platter. Just make sure you’re sharing with a friend. 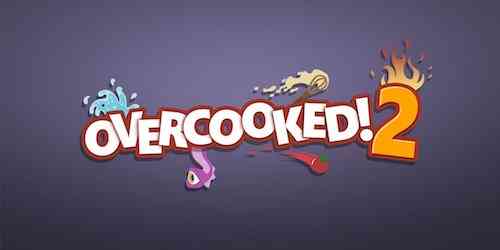