I’m not sure I’ve ever played a game quite like Octahedron.

Even the game’s opening cutscene is too esoteric to really explain: a shadowy man-shaped figure exits a log cabin, beckoned to the nearby woods by a glowing, floating octahedron which, upon being touched, transports the shadow-man Tron-style into a bizarre, beat-heavy neon hellscape from which he must escape.

What’s even more bizarre about this creepy setup is how little it prepares you for the game itself. At its core, Octahedron is a bottom-to-top platformer, one in which you are creating the platforms yourself. Each level starts your pixelated, octahedron-headed avatar at the bottom of a vertical climb that you must ascend using the game’s core mechanic: jumping and creating platforms in rhythm with the beat of the booming electronic soundtrack in the background.

At first blush, that sounds like just the kind of clever-but-underused gimmick you’d expect from an indie game. With Octahedron, though, this rhythm-focused platform generation is tightly tied into both your traversal and combat. Each stage provides a set number of temporary platforms you can produce simultaneously, and you unlock a number of different platform types as you ascend to higher levels, which can lead to some dastardly inventive platforming puzzles.

I did not expect the layers of complexity that Octahedron piles onto its core mechanic. It’s not just about jumping from platform to platform as you climb to the top. You can also use platforms to block incoming attacks and smash lights to earn collectibles, create elevators by placing them in bracketed areas, or free chained blocks that then change the level geometry. New platform types become available in the late game that offer strategic advantages against the more demanding enemies and threats, like shooting a downward blast, or an elastic platform that launches you upwards.

While those additions do add to the fun of the experience, Octahedron’s greatest asset is its pacing. The game ramps its difficulty on a thoughtful curve, gradually increasing the difficulty one turn of the knob at a time, giving you the time to experiment with each new toy before being faced with more intensive challenges.

This is also aided by the game’s fantastic pulsing electronic score. Each level introduces either a higher-tempo version of a previous track, or something altogether new, challenging you to understand the rhythm of the tracks before mastering the timing of a stage’s obstacles. If it was solely intended to provide a rhythmic logic to the platform mechanic, the music would be forgettable. But Octahedron’s soundtrack uses pounding, high-tempo baselines and synth harmonies to both ramp up the tempo and keep your head bopping as it does.

Oddly, the thing that will most likely compel people to give this game a look – its entertaining fusion of pixel graphics and 80’s neon eye candy lighting effects – leads to some of my only gripes with the game. The aesthetic is a delight to behold, at first, but, especially in the later stages, it can sometimes overwhelm the senses. There are a lot of artifacts and effects thrown at the screen, all painted in a neon colour palette, and enemies and geometry can become obfuscated by the screen noise. Combined with some dodgy checkpoint placement, these issues definitely pulled me out of the established groove at times.

Still, Octahedron is a bombastic, prismatic, punishing rhythm game that is a ton of fun, while it lasts. The game’s narrative is far dourer than the 80s neon electro-synth aesthetic you spend most of your time in, but it is certainly mechanically satisfying enough to run through the whole thing more than once – and I found myself looking up the soundtrack long after I’d had my fill of the game itself. There is definitely a lot of thought and passion that went into this, and if you are a fan of 2D platformers, there’s no reason you shouldn’t check this out. 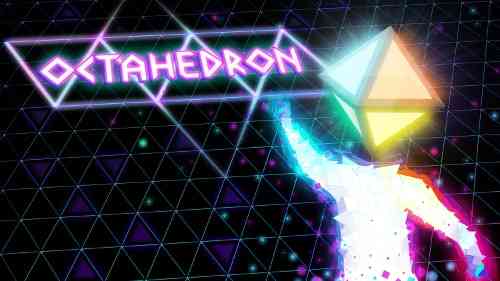