Ni no Kuni: Wrath of the White Witch (PS3) Review

Playing Ni no Kuni: Wrath of the White Witch is a bit like looking through an open window to my past and witnessing my earlier years as a young gamer.  A window that I’ve long forgotten about and haven’t stopped to peer through in a very long time.  In returning to the roots of the JRPGs that dominated my video game library back in the 90’s, developer Level-5 has reminded me not only how important traditional role-playing games were in shaping my love affair with games, but also what we’ve lost from the industry during its evolution into the current generation.

Ni no Kuni is in many ways a tribute to what role-playing games were like in the era of the Super Nintendo and the original PlayStation, and it presents a refreshing change in a genre that’s become somewhat niche and almost cultish among the modern western audience. Level-5 goes back to basics by focusing on what’s most important – the story being told and the journey of its telling.  What always drew me to RPGs was experiencing an imaginative universe unfold through great storytelling, memorable characters and well written dialogue. Yes, the innovative battle systems, eccentric boss fights, level grinding and treasure hunting aspects are equally as important – it’s a game after all – but these same systems are often bogged down by a sea of frustrating mechanics and repetitive gameplay that can feel downright insufferable. Without a significant story to back it all up and keep us craving for more, what should be an entertaining experience devolves into a tedious one, and becomes a lot less accessible to any but the most hardcore fans. Luckily, Ni No Kuni’s mechanics are very approachable and well-paced despite it’s JRPG ancestry. And don’t let it’s deceptive simplicity fool you. Underneath its almost child-like charm is a surprising amount of depth and complexity that would enthrall even the most devout of role-players. 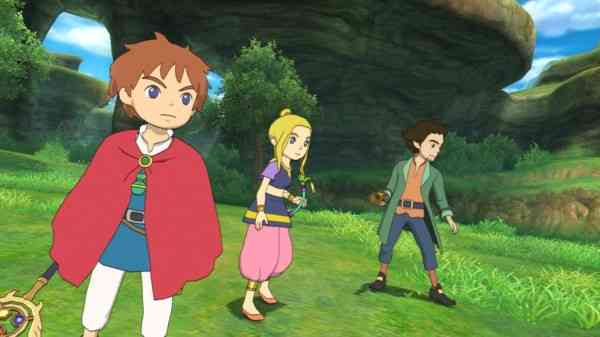 The story begins in the small town of Motorville – a 50’s styled Pleasantville complete with white picket fences and a tight-knit community of overly friendly neighbors who all seem to know your name.  The kind of place where the air is clean and children can actually be found playing outside.  This is the home of Oliver, a well-mannered young boy with a curious appetite for fun and adventure, yet still mindful enough to help his mother out with the groceries.  He’s a good boy who’s kind and thoughtful, and while he usually does his best to stay out of trouble, his easy going yet slightly naive nature lands him into what starts as a minor mishap, but ultimately ends in tragedy.  Heart broken by this turn of events, Oliver isolates himself to deal with his overwhelming grief.  That’s when his world is flipped upside down.  Through an unlikely meeting with a lovable fairy named Mr. Drippy, Oliver is offered a second chance to reclaim what was lost, and the only condition is the one small task of saving the entire world!

Actually, that’s not really accurate, because Oliver’s world isn’t the one in need of saving.  Through the power of a magic book and a small wooden wand, Oliver – along with Mr. Drippy – travel to the fairy’s home, a parallel world filled with magic and fantasy, a world much different then the suburbs he’s used to, yet strangely familiar at the same time. In order to aid Mr. Drippy and the inhabits of this place, Oliver must overcome his emotional barriers and learn the ways of the wizard; becoming one worthy enough to face and defeat the powerful sorcerer Shadar, who has entrapped the realm in fear and chaos by breaking the hearts of the people. How can a young boy and a small fairy accomplish this overwhelming task? Easy, by being the very best and catching all the pokemans!

Ok, maybe there’s more to it then that, but the first thing you’ll learn early on is that Oliver doesn’t really fight the enemies alone.  The lands of Ni no Kuni are crawling with the typical dangerous beasties you’d find familiar in games like Dragon Quest or Final Fantasy.  Although capable in his own right, Oliver is only a fledgling in the business of wizardry.  He and his party members can wield some highly potent magic when the need arises, but they mainly rely on the aid of creatures known as familiars to fight on their behalf. As you and your comrades gain experience, level up and earn new spells, your pets will also level up and learn new abilities. And like Pokemon, every familiar has certain affinities and weaknesses to elemental and physical damage. Although somewhat traditional in design, the battle system proves to be quite innovative with on the fly switching between familiars during fights, equipping pets with different weapons and gear, feeding them treats to boost their attributes and even evolving them to become bigger and stronger.  And those dangerous beasts I mentioned earlier?  With enough patience and resolve, you can catch and enlist all of them, just like the familiars you start with.  It’s almost a game in itself when you consider there are hundreds of them to discover and collect. 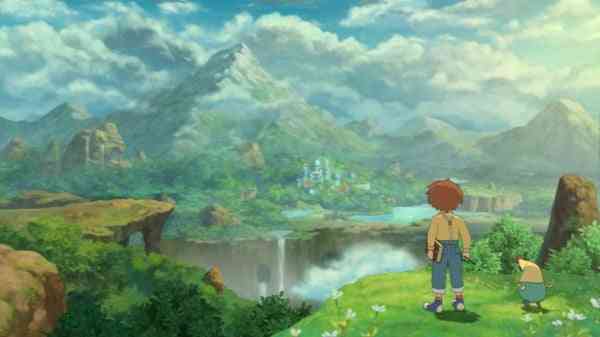 And the battle system becomes more and more dense as you peel back the layers.  You control your party members and familiars in real time, so positioning and targeting familiars becomes an important strategy.  And the speed of their movements differ, playing a key role since counter-attacks and critical hits will often yield glims: HP and MP orbs that fall to the ground and disappear when not collected quickly.  Occasionally, a golden glim will appear and provide the familiar or party member who grabs it with brief access to their tremendously powerful unique special attacks. With all I’ve mentioned and that which you’ll discover as you play, I feel that the battle system is more robust then would first appear, and scales well depending on your level of commitment. You can take it as deep or as lightly as you want to and still remain effective and competitive. And for those who are just not that tactically gifted, the enemies levels are static in each area, so you can go the more traditional route of grinding out levels to offset any weaknesses in your game.  I also think it helps that enemies roam visibly on the map in similar fashion to the enemies in Chrono Trigger, so engaging them or attempting to avoid them – which isn’t always easy – is for the most part at your discretion. And as you level up and become stronger, enemies will stop attacking you and flee in your presence, which is a good indicator that it’s time to move on to the next region.

Which leads me to the main storyline.  I will admit that it’s a bit linear as far as RPG narratives are concerned, but the constant flow of trials Oliver must conquer and the frequent change in scenery and setting make the entire ride engaging and surprising. Throughout the game, I had the constant feeling of uncertainty looming over me from the frequent cutscenes and dialogue; like there was something more sinister at work then Oliver was realizing, and it pushed me to keep going and learn more.  Also, his new found friends provide both comic hilarity and eventual insight into what’s taking place, and Oliver will travel through rich, diverse lands ranging from vibrant colourful forests to dark mechanical havens that vary in perspective and are fun to explore.

And if the lengthy, enjoyable storyline isn’t enough, the game has numerous side quests in bounties and errands available in each city. Like hunting down creatures terrorizing the region or using your sizable book of magic spells to aid town citizens with their problems. You can catch and deliver specific and rare familiars for enthusiasts and even revisit previously explored areas to deal with new threats.  Whatever errands you choose to complete will earn you more than the customary cash and item combo, you will also receive stamps for “Merit cards”, which you will learn about in the first city.  The harder the tasks performed,  the more stamps you get to fill up these cards, which can then be redeemed for benefits like bigger experience gains and faster glim generation during battle. Oh, and one other side quest you’ll often engage in ties into the main narrative.  You’ll encounter people throughout the realm who have had a part of their hearts stolen by Shadar, leaving them broken and emotionally empty.  Oliver can restore their hearts through magic by borrowing the essence of others who have an abundance of emotional strength – like love or kindness. This plays well into Oliver’s natural good nature and is nice change from conventional RPG fetch quests (which are also present, but not overwhelmingly).  Suffice it to say, you don’t have to worry about having things to do, as there are hours and hours of content to play through to keep you occupied.  And did I mention that all this stuff looks gorgeous? 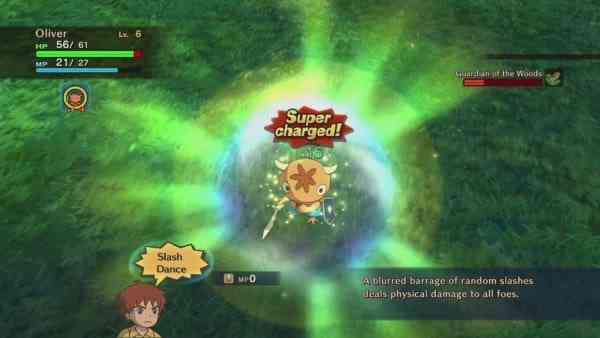 One of Ni no Kuni’s greatest strengths lie in its breath taking visuals. Level – 5 worked very closely with Studio Ghibli in developing the game’s beautiful art direction. To put it frankly, it’s like being in a Disney cartoon. Studio Ghibli is a major Japanese animation studio responsible for very successful films  like Princess Mononoke and Spirited Away, and that same iconic style they feature becomes immediately apparent in Ni no Kuni.  Not only does the game feature fully animated cut scenes by Studio Ghibli itself, but Level – 5’s design of the characters and environments are almost seamless in their resemblance.  The game may play like the classics, but it looks just as nice as anything out today.  And the original sound track composed by well-known composer Joe Hisaishi (who composed for several Studio Ghibli films) is very well suited to Ni no Kuni’s style, being fully Orchestrated like many of the RPGs of old. The voice acting, whether in Japanese or in English, is for the most part consistent and masterfully performed, with maybe the exception of one or two characters. Still, the entire package combined is extremely well translated and localized, and highly polished, which only makes the atmosphere and narrative that much more enticing.

Overall, Ni no Kuni: Wrath of the White Witch has impressed me a great deal.  It’s convinced me that while the genre isn’t as mainstream as it once was, the potential to make a comeback is surely there – as long as it’s done properly and with care.  To put it simply, Ni no Kuni learns from the mistakes of its predecessors by being a more approachable experience, while still incorporating the traditional RPG elements that made these games so popular in their heyday.  It’s not perfect of course, and may not turn heads amongst the most eccentric of JRPG lovers, but what Level – 5 and Studio Ghibli have produced is an entrancing trip through an alluring, original adventure that’s surprisingly touching despite its simplicity, and easily rivals some of the best games I’ve played to date.