Munin is the latest side scrolling puzzler published by Daedalic (The Dark Eye series, Whispered World) having been developed by relative newby Gojira. It tells the tale of how Odin would send his two trusty ravens, Huginn and Munin, to fly over Midgard (us) and bring him back all the information he could. One day, Loki strips Munin of her wings and turns her into a mortal girl. Munin the mortal now has to run across the nine worlds of Yggdrasil and reclaim her feathers to become whole again.

Munin’s strength lies in the loving care that its creators have for Norse mythology. As someone who also loves Norse mythos (this has a little to do with Thor being my favorite Avenger), I really liked the story going into this. When I got into the gameplay, I discovered a fairly straightforward 2D puzzler that seemed easy enough… to start with. But I’m getting ahead of myself. Munin utilizes the Nine Worlds to create different environments (Hel has ghosts, Niflheim has water etc.) to create unique puzzles to solve to obtain your feathers. They also split the screen up into different sections that you can spin and twist to create ladders, bridges or combine with the environment to help you get that last pesky feather. With the movable sections of environments, there also comes a bit of a physics challenge with it as well. If you need to roll a boulder to another piece, spin the section it’s in, let it start rolling and use the momentum to get it into the section you need. 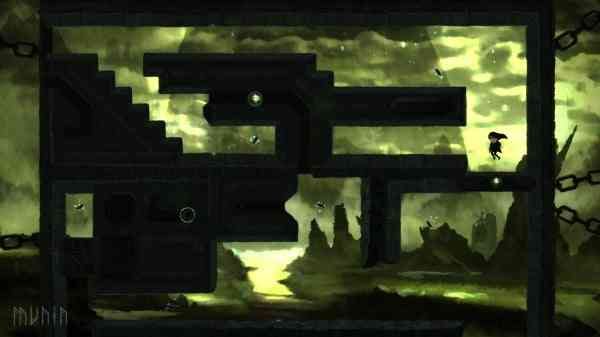 All of these combine into what ended up being a rather challenging puzzler. It was actually a lot of fun using the elemental stuff as well as the physics to get the proper lever clicked so you could jump onto another platform as a boulder props up a broken log and you spin the final piece while running to avoid being squished and obtaining that final feather. It was actually gratifying to figure out that final piece and have Huginn whip you off to the next stage.

I was having lots of fun with Munin, right up until I wasn’t. Maybe my experience is tainted because I’m not spatially oriented and have always had a little trouble with puzzles, but there came a point in almost every world that I had to give up on more than once because it became frustrating. There’s one level in particular that I can think of that required you to not only have excellent reflexes to jump and run while spinning pieces in front of you, but you also had to use the elements to fill up a chamber and then the physics aspect to spin fast enough to fill up a separate chamber in time for you to get there with a margin of error of approximately zero. It’s not that these levels are impossible per se (they pretty much are), but what it did was slow the game down substantially. Considering I beat the level previous to that in one shot in just a couple of minutes, it was even more frustrating and made me hesitant to get back into it. 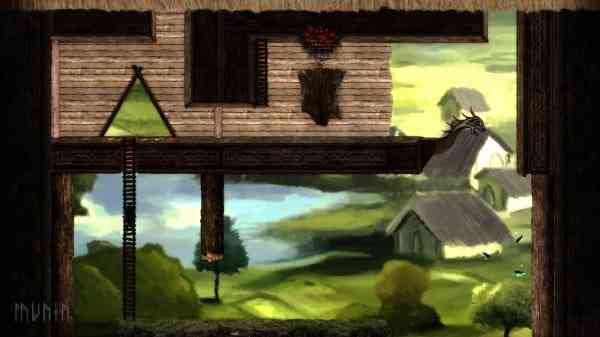 Another really strong point Munin has is the artwork and music. The artwork is beautiful, using the Nine Worlds as a backdrop that can be both compelling and sometimes really strange, depending on the world. Not that strange is a bad thing, though. Having Hel stare at you from the background or have a massive giant stroll by as you try to figure out a puzzle just adds a level of awesome to the game! The music is equally as strong, being both subtle and haunting. A quiet orchestra in the background does wonders for building atmosphere without being intrusive. It also was calming when my rage got out of hand over a particularly complex puzzle.

On the other hand, the controls definitely could’ve used some work. They weren’t very responsive nor were they consistent. Making a jump the first time doesn’t necessarily mean you’ll make it five seconds later, so that became a factor and another aspect that added to the difficulty of harder levels. Also, even the slightest touch on deadly obstacles would kill you. I can’t even tell you how many times I went to run off of a platform and my hair scraped the ceiling and I ended up dead, much to the addition of my aforementioned frustrations.

Overall, Munin falls into a middle of the road game for me. While the artwork, music and story were strong, the actual gameplay fluctuated between too easy and way too hard far too frequently, and the controls were unreliable enough to add to the difficulty. If you’re good at spatial recognition and are interested in a cheap (it’s currently on sale on Steam) puzzler that you will spend a fair bit of time on and is nice to look at, pick it up. If you’re not (like me) and you’re looking for something a little easier, look elsewhere. 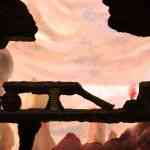 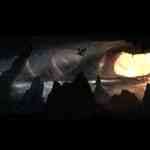 Next GRID Autosport (PS3) Review – Gear Up for Codemasters’ Latest
Previous Evil Controllers Custom Controller Review/Impressions – Personalize a Controller of Your Choice, for a Price of Course.