Mortal Kombat Komplete Edition is the latest offering from NetherRealm Studios and pits the most famous Mortal Kombat characters against each other as they fight for Earthrealm or Outworld.  Being a fan of the franchise, I have come to love Mortal Kombat for its gory fatalities, spooky stages, effective music and awesome character selection. So needless to say, I was pumped when I heard Komplete Edition was coming out and all the fatalities were returning in their full glory.

Komplete Edition story is a retelling of the events of the first three Mortal Kombat games. As Raiden is defeated at the hands of Shao Khan he sends a message to his former self in a premonition. Raiden then tries to alter the future to avoid the merging of Earthrealm and Outworld. The events of Mortal Kombat then go through numerous fighters in hopes to change the future. The story is effective at providing a nice summary of each character and why they are fighting in the Mortal Kombat tournament. The story of Komplete Edition is not unique to the series but it is clear that an insane amount of effort went into providing enough that long-time fans of the series will not be bored, whereas newcomers will not be lost with each event. That being said, some of the character’s backstories lacked some explanation that hardcore fans of the franchise will immediately notice. 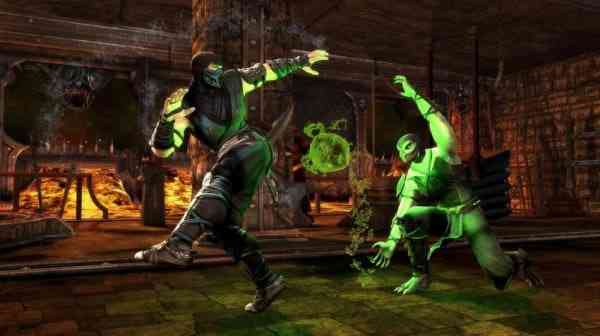 In arcade/fight mode you have a number of different options such as ladder, tag ladder, test your luck, might, sight and strike. The ladder and tag ladder are where you go through a gauntlet of enemies to eventually face off against Shao Khan. Test your luck, might, sight and strike are pretty much self-explanatory, as it is a test of your reflexes and button-mashing. These different modes all keep the action somewhat fresh.  Fighting game tend to get stale after a while but Komplete Edition manages to keep things fresh with various modes and mixing up the gameplay a bit.  For instance in ladder, the game drops a mini-game which perfectly breaks up the action.  Additionally, you can unlock content as you progress along several of the games many modes.

For those new to the franchise, there are practice and training modes which allow you to learn the basic moves of the game and then put them to use while beating down an AI controlled character. Not only is the practice mode useful for seeing which part of your opponent’s anatomy is being hit, but it also helps with giving you a percentage of damage each hit makes as well as illuminating your hands or feet. This is useful as you can choose how your opponent will act, whether it will block, attack or roll. The only issue I noticed here was on the hit detection, sometimes it is spot-on and other times it could be off a bit.

Regarding the control in Komplete Edition, the game uses a 6-button fighting stick that was actually packaged with the Kollector’s Edition when it was released. You can get away with using a standard 4-button controller but online you may have a tough time competing against those equipped with the stick. I say this because enhanced attacks, breakers and x-ray attacks requires you to push down one or both triggers while inputting the action on the d-pad.  As for the AI, it matches up perfectly to the level of difficulty you select, anywhere from easy to hard. The default is medium difficulty. In terms of fighting the AI, the AI is not cheap or unbearable; however, you will have to learn how to counter some moves in order to survive. 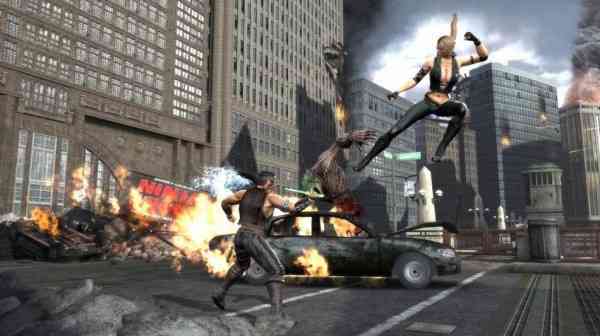 Each character has a number of special moves which are completely unique to the character and have different properties. Each character also has a specific list of combos as well as their own attacks. An enhanced attack (usually one or two more hits) uses one bar in a meter, whereas a ‘breaker’, which interrupts an opponent’s combo, uses 2 bars. An ‘X-ray’ attack uses all three parts of meter and is specific for the character used. The x-ray attack will actually show you an x-ray of the damage caused to that area which is usually brutal and gruesome. At the end of every match, you have the option of killing your opponent or delivering a final blow. If you decide to kill your opponent, you can input the button sequence for your specific character’s fatality and they will deal death to your opponent in a brutal, gruesome and grotesque way.

The unique and highly detailed character designs for the many different fighters in the game are impressive. Moreover, there are classic character skins, alternative costumes as well as damaged costumes. The amount of effort put into the animations is crazy, and well above the detail in other fighting games that have come out recently. Each character is rendered beautifully and little is lost when transitioning from cut-scene to gameplay. Each level has been meticulously crafted and some are absolutely iconic to the series (acid bath, suicide forest and pit levels). These levels do have a high degree of rendering, some moving parts and are quite realistic looking. They are not unduly colorful or distracting, which is perfect as they complement the fighting quite well. Komplete Edition flows nearly flawlessly.  That is, once you become accustomed to the input delays and quickness of the combos.

As for the music, it is the typical iconic Mortal Kombat gongs and bamboo drums intertwined with crowd chanting, symphonic/orchestral music or tribal metal. This presents a new face for those who are used to the rhythm based Mortal Kombat background music and a creepy yet inviting one for those who are not. Each level has their own unique theme and truly hits home with the feeling and ambience of the level. The synergy between feel and musical background and overtone is perfect.  Though sometimes the background music cannot be heard over the effects or groans, but all layers of music are adjustable in the options menu. In considering the voice acting, each character is accurately represented. Scorpion sounds like an angry deity hell-bent on revenge, whereas Sindel sounds like a screaming siren. No character is over the top with their portrayal, and also does not come off as ineffectual or flat. The sound effects are similarly accurate. When you punch a robot, you hear a clank akin to denting, and when you throw your opponent, it sounds like they hit the ground. Weapons and special attacks are also high in quality; acid sounds corrosive and explosions sound great. There are absolutely no issues with the sound department as it comes off clean and independent without sounding isolated. 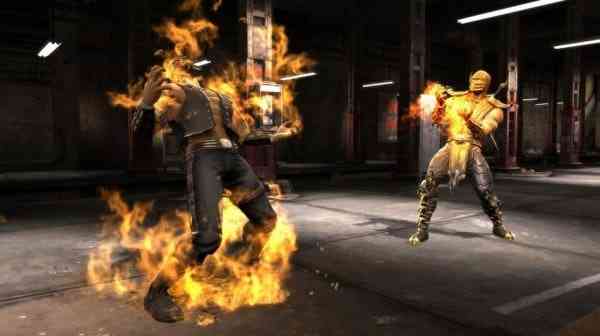 As for the online gameplay, there is virtually no lag. One of the greatest killers of online gaming experience as far as fighters go is an undue connection failure or delay. Komplete Edition suffers none of these issues, and everything flows as if it is being played in a local offline versus match. I did notice a slowdown when my internet resources were being used elsewhere, but it wasn’t a big deal and did not cost me the match.

Overall Mortal Kombat Komplete Edition for the Xbox 360 is a must-own for fighter fans and fans of the franchise.  The visuals are impressive and those over the top Mortal Kombat gory kills are back and better than ever.  The developers did not hold back with the installment in the best-selling fighting series as the children absolutely need to leave the room when the fights begin or at the very least when the fights wrap-up.  Not to mention the Komplete Edition is an incredibly deep fighting game featuring plenty of modes, backstories, characters, combos and enhanced storyline.  At the end of the day, the Komplete Edition is about as complete as a fighting game gets.