Recently I had a chance to check out MLB 13: The Show for the PlayStation 3 and walked away mostly impressed.  I found the new additions pushed the series forward and did enough for the franchise to remain the undisputed champion of virtual baseball games.  This past week I put the MLB 13: The Show for the Vita through its paces and much like its big brother game for the PS3 there is no doubt it is a solid Vita title and quite easily the best baseball game I have played on a handheld machine to date.  This being said, this Vita version is not quite as polished as the PS3 version; however, I don’t blame the development team as they could only do so much with the hardware when they decided to pack a full console game into Sony’s handheld console.

It is hard to knock the game for not looking as good as its big brother, but as I sat down last night throwing strike after strike with Mr. Strasburg I could not help but feel like I was playing a last generation console game.  It had that been there and done that feeling.  I had a difficult time wrapping my head around the fact this was indeed a new MLB game because frankly it didn’t feel all that “new”.  Yet when you see what is under the hood here you realize that all the features and enhancements that you get in the PS3 version are indeed included in this game.  It is actually quite remarkable how much the development team managed to squeeze into this portable game.  The Show staple modes such as the Road to the Show, Online, Season and Franchise are all included.  New additions such as the Post Season mode, Beginner mode, Steve Lyons joining the broadcast team and The Show Live are also included.  There is really an amazing amount of options included that will keep any diehard baseball fan entertained until the end of the MLB baseball season.  Yet in order to squeeze all these goodies into that tiny game cartridge, some cut backs had to be made and it is noticeable. 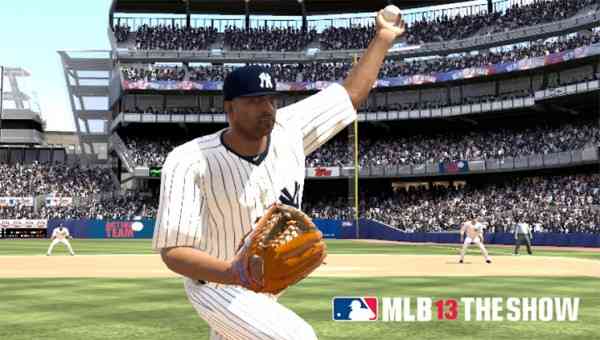 If you have not played the PS3 version of the game you will likely probably be wondering what my problem is, as on its own MLB 13: The Show for the Vita is wonderfully detailed.  The parks, players and even the dynamic score board look pretty darn good for a handheld game.  Everything from the batters signature stances and mannerisms is here.  MLB 13: The Show for the Vita pays brilliant homage to America’s favorite pastime; however, some of the animations do not look as sharp as they could, and yes it does have a tendency to look more like a PS2 port.  Likewise, and despite some of the realism, some of the player movements do not seem natural and I did notice several glitches as I played.  I also noticed some slowdown when I had at least a couple of runners on the base pads and I was driving a hit into the gap for extra bases.  You should also prepare yourself for some beefy load times.  These issues are not deal-breakers but are quite noticeable and just lend to a game that really does feel inferior to its PS3 big brother visually speaking.

Despite some of these issues, the game still feels balanced and as it should when it comes to hitting, pitching, fielding and base running.  Bashing the ball for a three-run homerun is incredibly satisfying, as is stealing a base or striking out the opposing side.  Pitching is a bit finicky at times as I struggled with the sensitive Vita analog stick to pinpoint the exact location of my pitches.  It was not major issue but certainly became one when facing a hitter like the Blue Jays Jose Bautista where you really cannot make any mistakes.  Fielding the ball can be touchy as well and does not always feel as it should.  This being said, much of the issues when playing a game like baseball really boils down to the hardware and size of the screen.  The reality is that the Vita does not have a 60″ HDTV display so naturally you have to come to terms that you just won’t get the exact same experience as you do on the PS3.  The ball seems out of proportion and being able to read pitchers is a little more difficult on the Vita.  Yet it is these subtle things that also make the Vita MLB game quite the challenge.

I really could go on and on about all the new features in the franchise this time around but I do not want to bore you to death.  If you want my thoughts on some of this year’s new additions you should check out my MLB 13: The Show review for the PS3 right HERE. 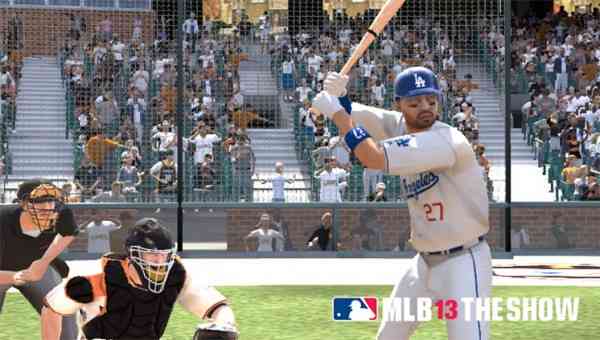 One of the features back from last year is the cross platform play where you can take your PS3 season, save it to the cloud, and continue playing on the road with your Vita.  I absolutely love this feature and something I am glad the development team brought back.  It is unfortunate that in order to take advantage of this feature you will have to drop over $100 for both games; however, this may be something the PS4 may rectify.  So sorry folks; no cross-buy is available this time around.

When it comes to the sound, MLB 13: The Show is solid and does a wonderful job at creating that MLB big league atmosphere.  Does it sound as good as its PS3 game?  Well not quite but pretty darn close.  It just appears to be missing some of the depth the PS3 audio has.  The commentary does not appear nearly as detailed as the PS3 version of the game.  Of course with any portable games on a handheld console, headphones make the experience that much better, but the Vita’s speakers do an admirable job.

At the end of the day, MLB 13: The Show for the Vita is quite easily the best handheld baseball game I have played to date.  The authenticity of the MLB is showcased magnificently and there is plenty to offer for fans of the franchise.  Sure it does not look as good as the PS3 version of the game and there are some technical issues that rear their ugly head from time to time, yet there is no mistaking this is an amazingly deep game for gamers on the go and one baseball fans with a PS Vita can purchase with confidence.