My favorite building sim of all time was, and remains, Frontier’s Planet Coaster. It’s a colorful, easy to get into theme park sim that is both immediately rewarding and infinitely deep. When the folks at Frontier announced Planet Zoo I was beyond thrilled, but ultimately disappointed in the final product because it was — and still is — a somewhat overly dry and complex sim, despite its incredibly well rendered animals and biomes. The original Jurassic Park Evolution was also, unfortunately, a bit of a letdown, a shallow, slow moving and kind of buggy game that had too little of the expected wonder and potential chaos we’d expect from a title that was all about managing — and inevitably unleashing — dinosaurs. Frontier must have paid attention, because “chaos” is hard wired into one of Jurassic Park Evolution 2’s main modes.

For the sequel, Frontier condensed the campaign into what is essentially a handful-of-hours-long tutorial. It’s frankly a little slow moving and and a bit dull, focused on a series of step-by-step missions that teach many of the requisite skills that will be needed in other modes. This time around, the dinosaurs are roaming free in the wilderness areas of North America like Yosemite and rural Pennsylvania and while the tasks aren’t especially compelling, the landscapes are beautifully rendered. Even in the short and uninspired campaign, there is still a bit of hard-to-ignore wonder of the kind that Jurassic Park seems to come by naturally, as dinosaurs roam the American wilderness. 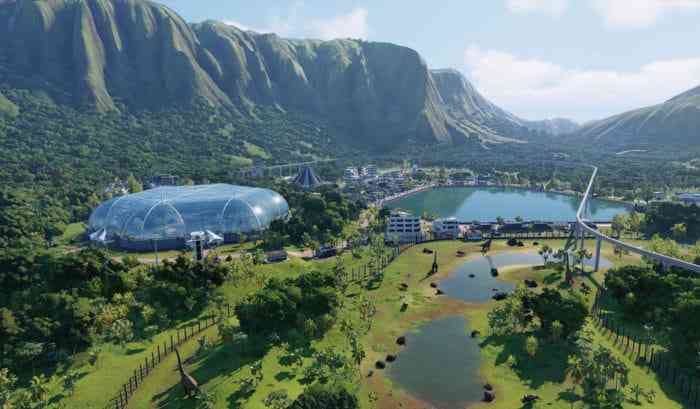 It is probably in the new and incredibly engaging Chaos Theory mode that many players will really connect with the game. Over five scenarios, Chaos Theory takes pivotal moments from each of the Jurassic Park and Jurassic World films and turns them into assignments, tasking the player to do what the film’s protagonists could not, turning evitable dinosaur disorder into something akin to control. Of course you can revisit the moment in the original film when things were about to go completely to hell, but fans of all the movies will find a lot to love here. Players have considerable freedom to approach the tasks in creative ways but there are restrictions, too, like keeping the general structure of the park already in place. It could easily be argued that Chaos Theory is the game’s real campaign, and it’s a lot of fun.

For many of us theme park sim fans, Sandbox Mode is where we spend the majority of our time, creating sprawling visions of the ultimate park. It’s more than a little annoying, then, that many of the game’s assets are locked in the Sandbox Mode until the player has uncovered them in one of the other game modes. It’s not that I don’t want to play the campaign, Challenge Mode or Chaos Theory scenarios, but if my reason for picking up Jurassic Park Evolution 2 is diving headfirst into the challenge or relaxing time sink of building a park, I should have that opportunity. It doesn’t make sense to gate it off, and none of Frontier’s other sims do that. Let’s be honest, more than a few players just want to build a theme park on the edge of dinosaur Armageddon. The tools are there. But not right away. 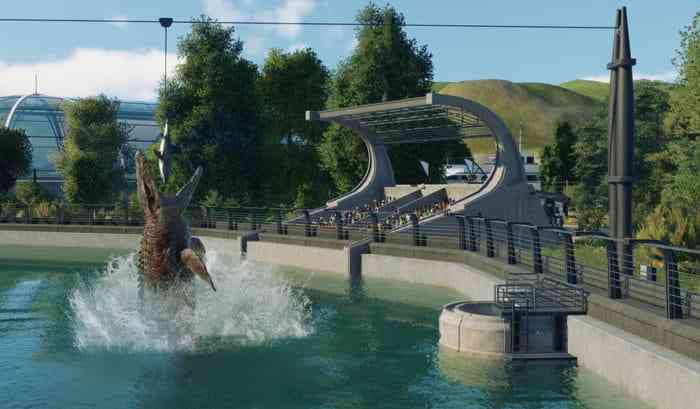 Like Planet Zoo, on which a lot of the dinosaur management mechanics are based, players will spend a lot of time deep in the weeds of caring for the health and security of the animals. As in the first game there is a wide array of staff and support buildings, infrastructure and research facilities that need to be in place for the dinosaurs to survive, thrive and reproduce. As in any park management sim, creating the ultimate Jurassic Park will also mean balancing human guest happiness and the desire for more and more impressive animals against the cost of keeping the existing collection secure and alive. Players of the first game will notice quite a few quality of life enhancements, like herbivore dinosaurs that can live off of eating ground cover, and automated ranger stations that will take care of some moment-to-moment tasks unassisted. Notable among Jurassic Park Evolution 2’s many new dinosaurs are incredibly well modeled aquatic and flying animals like the Mosasaurus and Pteranodons. Housing them means building the new Aviaries or Lagoon structures, immense and impressive additions to any park.

Jurassic World Evolution 2 looks better than the first game, and the dinosaurs remain the stars of the show, incredibly well modeled and animated. There are a more realistic and a wider range of behaviors, too. Unlike Planet Coaster or Planet Zoo, though, the options for customizing the structures and decor are limited. Fans of the films will recognize many of the actors vocally reprising their roles, with Jeff Goldblum intoning his semi-mystical gibberish with varying degrees of enthusiasm and contextual comprehension. 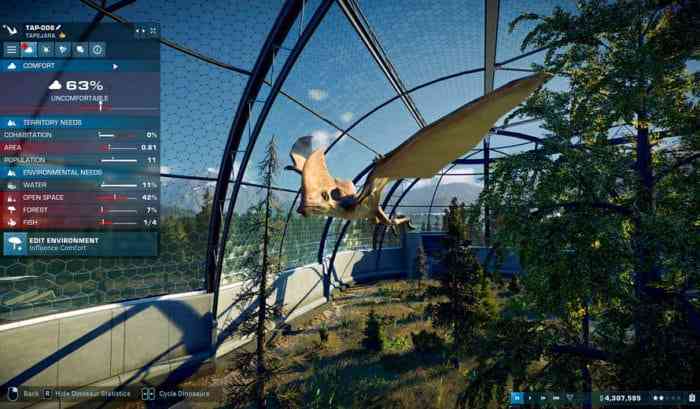 Despite being frustrated by the initial limitations of the Sandbox Mode and the lackluster campaign, I found a lot to enjoy and appreciate about Jurassic World Evolution 2. Chaos Theory is an engaging and creative way of blending the iconic films into the game, and the new aquatic and flying dinosaurs are among the best of many new animals. Building and managing a theme park full of impossibly ancient animals is challenging and rewarding, and despite some annoyances, the game also manages to retain many grin-worthy moments of wonder at the improbable. People and dinosaurs just aren’t meant to be in the same place at the same time.

Short campaign
Sandbox mode limited at start
Can get repetitious 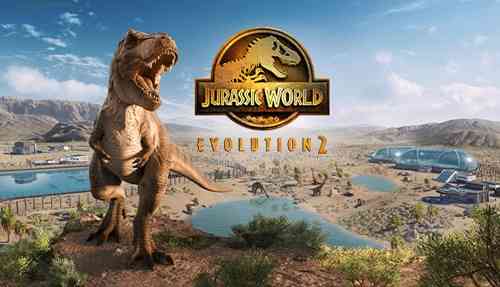