Injustice: Gods Among Us (Xbox 360) Review

Mortal Kombat was one of my favourite games of 2011. With exceptional gameplay, very cool x-ray moves, and fun multiplayer modes, it renewed my love for the fighting genre. Needless to say, I’ve been anxiously awaiting NetherRealm Studios next project Injustice: Gods Among Us. I really had no interest in the last DC Universe fighting game, a Mortal Kombat crossover that came out of the now defunct Midway Games, but given the success of Mortal Kombat in 2011 I had high hopes for Injustice, and I’m quite pleased say that it has surpassed my expectations.

Fighting games aren’t usually known for their single player content, and their storylines have a tendency to be somewhat cheesy and/or uninteresting, as the game as a whole focuses on the multiplayer suite instead. Thankfully Injustice differs from most in the genre. The writing team at NetherRealm should be commended as they took great care to stay true the much beloved DC characters while creating an interesting and over the top plot. While admittedly I’m not hard-core fan, I am quite familiar with many characters in the DC Universe, and I can confidently say that the single player campaign will appeal to comic book enthusiasts. 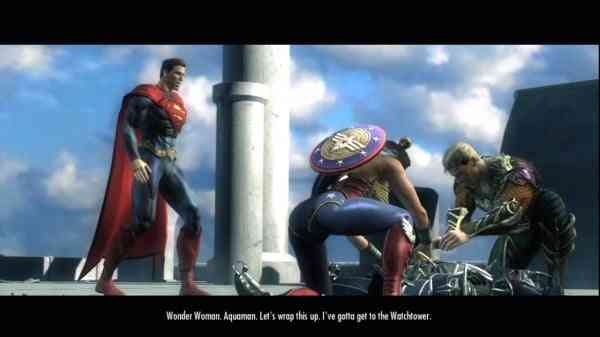 Things have gone horribly amiss in the city of Metropolis. The Joker has done something unspeakable with a nuclear bomb, and a grieving Superman kills him, despite Batman’s pleas. Superman goes a little nuts, resulting in an epic clash between the two and their allies. Playing as a number of characters, the storyline is told through a series of twelve chapters, introducing you to the roster of superheroes and villains, ensuring you have a great understanding of their abilities, their strengths, and their weaknesses.

I’m not particularly skilled in the fighting genre, but this did not stop me from feeling quite comfortable with the controls, and I have to say that they seemed quite responsive. While there is a bit of a learning curve I thought that it was very accessible to those new to the genre, or for those who have a tendency to button mash. Overall I would say that the controls are simple to master while combo and special moves aren’t overly complicated to perform. Once you get the hang of the light, medium, and heavy attacks, as well as blocking an your special move where your character uses a weapon or a gadget, you can make your way through the single player campaign with relative ease.  But if you want to fine tune your skills before facing off against the elite fighters online (and lose miserably like me!), there’s an extensive tutorial to play through, as well as a practice mode to boost your confidence before venturing into the world of multiplayer, both offline or online.

Much like Mortal Kombat in 2011, there is a power meter on the bottom of the screen. This meter fills up when an opponent hits you, or when you successfully perform a combo. When the meter is full you can unleash a fantastic, brutal power move with a simple press of the trigger buttons. If successful (as you do have a brief moment to jump/escape the attack) you are rewarded with a entertaining cinematic, like Flash zipping around the world, Solomon Grundy smashing a tombstone over your opponents head, and Harley Quinn playfully smashing your enemy with a mallet then using an explosive pie. 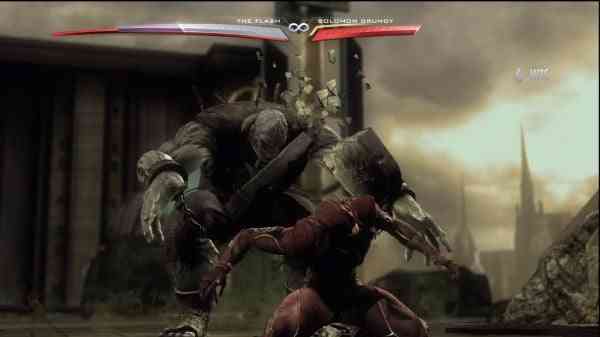 The points in this meter can also be used in the game’s Clash System, which is way of breaking your enemies combo. When a clash is initiated, players run up to each other in a quick cut scene, and both are prompted to bet a portion of their meter, which remains hidden from the other. If the player attacking wins, the other player will take an extensive amount of damage, but if the defender wins, their health bar will replenish. I thought this to be a bit confusing, and really didn’t think it added much to gameplay, although I suppose it’s an interesting way to block your opponent.

What really stands out for me in Injustice is the level design. I love the detail in the backgrounds, the little things going on behind the scenes, and many characters who are not on the actual fighting roster make an appearance. But what was really spectacular was the way you can interact with the various environments. Within each level there are gas cylinders, rockets, garbage bins, and a wide range of objects that, when pressing the right bumper, can be used to strike your opponent allowing you to deal some very serious damage to your opponents health bar. There are also some pretty spectacular level transitions, which sends your foe brutally crashing to another area found on that specific level.

Overall the game has an impressive 24-character roster and 15 stages for you to choose from. From fan favourites like Superman, Wonder Woman, Batman, and Green Lantern to scheming villains like the Joker and Sinestro to brutish beasts like Doomsday and Bane, there’s a character for every play style. You’ll battle within locations like the Fortress of Solitude or the Batcave. I had a good laugh while my daughter was watching me play and I was selecting my character, she quipped, “Don’t pick Aquaman, Mom! He sucks and everyone hates him!” (something she picked up from a popular TV series). But once she saw how powerful he is and his amazing super move (Shark!!) she very quickly changed her opinion of him. Truly every character in the roster was very fun to play, although I did have a slight bit of difficulty with some of the flying or floating heroes. I should note that new characters will be added to the roster via DLC content, with Lobo confirmed in the first pack. 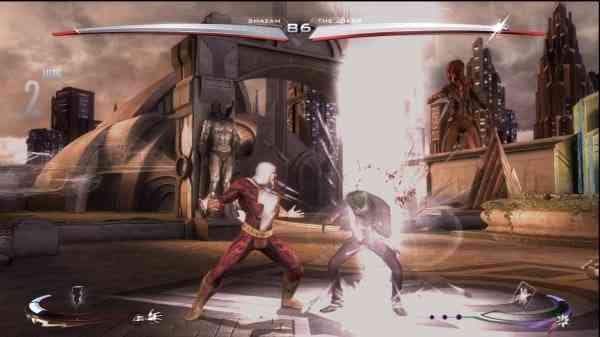 Multiplayer modes include a “King of The Hill” mode, where 8 players battle it out one on one for the rights to be the King.  There is also a straight 1 versus 1 mode as well as a Survivor mode, which challenges players to continue on to the next opponent without the health bar refilling. Optional objectives and daily challenges are also available and they are a nice touch as they give you additional experience points that can be used to purchase costumes and unlock bonus content. Not ready to face-off online? There is also the Battles mode, a traditional arcade ladder, and S.T.A.R Labs mission.  The latter mission mode is reminiscent of the Tower in Mortal Kombat from 2011, and in Injustice is offers a whopping 240 character specific challenges and mini-games to battle through.

Visually stunning, Injustice is pretty nice to look at. Everything from the cutscenes and the backgrounds to the character models and their animations look absolutely gorgeous and detailed. The game also moves at a fast clip and I have to say that a lot can go on on-screen and the game rarely takes a hit as it continues to move smoothly. The sound effects and music were also well done, and the voice acting really complimented the interesting plot. Some of my favourite voice actors made an appearance in Injustice, and I was quite pleased to hear Tara Strong reprising her role as the delightfully evil Harley Quinn and Jennifer Hale lending her talents to voice Hawk Girl and Killer Frost.

I’ll admit that I spent a few nights staying up long past my bedtime, begging my friends for just one more match, looking to get to the next XP level, or wanting to play just one more S.T.A.R Lab Mission. It speaks volumes as to how much fun can be had with this game. You’ll have a blast, whether playing alone or with some buddies while having a couple of beverages of your choice on a Friday night. With fantastic presentation, impressive graphics and voice acting, a surprisingly interesting story, a great control scheme, and a huge amount of content, I highly recommend Injustice: Gods Among Us to not only comic book fans and fighting game veterans, but to anyone looking for a game that’s extremely entertaining to play.