Muse Games had a Kickstarter a while ago looking for funding to make a successor to their 2010 game Guns of Icarus. With a humble goal of $10,000 it ended up receiving more than three times the asking amount, so there was much support to be had for an online steampunk shooter with airships. Guns of Icarus Online is finally here for you and your friends to take to the skies where you get attempt to take out the other factions in airship battles.

Guns of Icarus Online centralizes around manning an airship of four players (AI bots can be used if you’re short on people in the lobby), each of whom have a very specific role to play depending on the class they play as. You can chose from Pilot, Gunner, and Engineer. You get to pick a role to fill at the beginning of every match, and you can freely switch as long as you aren’t already playing in a match, so you’re not always confined to the same role. While all three roles will essentially play the same, they each have a distinct job and play style that is needed to succeed. While any player can technically repair, gun, or pilot, regardless of their role, playing into your classes strength is what will give you a great advantage in battle, but being able to be flexible and helping out where needed is also a necessity.

The Pilot will generally always be the captain of the ship and they steer the vessel due to their extra slots for the job. The pilot will generally have to focus on aerial maneuverers and making sure gunners are always in line with the turrets, depending on what sides of the ship the guns are allowed to be placed. It’s a straightforward role in theory, but in practice it will take at least a dozen matches to really become proficient at manoeuvring the way you intended to without thinking, providing you have a good crew to support your actions. 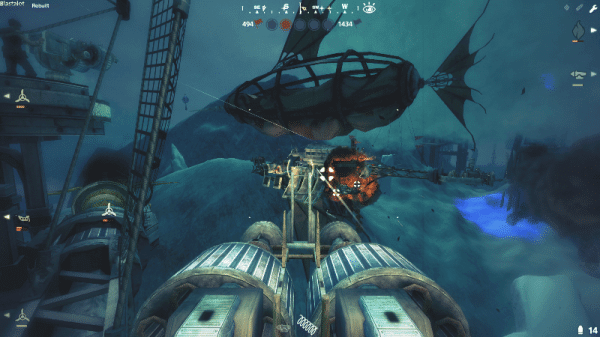 The Gunner may also seem like a straightforward class, as you’re generally just try to shoot the other ships in range, but there’s a surprising amount of strategy involved with choosing the right load out as well. While anyone can man a turret to help, the Gunner has the ability to choose from three distinct ammunition types that can greatly alter a one on one battle. Gunners gain access to multiple types of rounds that can greatly alter how a regular canon will fire and what the result will be including damage, higher damage shots, fire damage, and more. Knowing exactly what ammo type to use in a given situation will greatly increase your chances of a successful attack and many factors will have to be taken into consideration moment by moment.

The final class, Engineers, are the ones that will keep your airship afloat when you’re getting fired upon and flanked. As an Engineer you put out fires, repair, and rebuild your ship almost constantly. While you can man the canons to help when needed, you’ll generally be too busy repairing the engines and canons the majority of the time to keep busy. Having the choice of tools will weigh into your repair decisions as well, as you need to choose what tools to bring with you into battle, each of which have separate pros and cons, based on your play style. 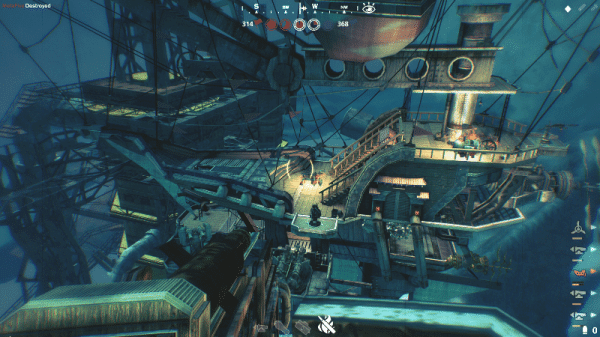 Each role needs to be filled by someone willing to do their specific job and if you want a good shot at prevailing against a more experienced team each have to do their job well. If someone on the team doesn’t pull his or her weight you are going to notice it quite early on in the match. Practice on each ship so that you can learn the layout and the quickest routes to each of the canons and repair spots that you’ll be making when the bombardment starts. Guns of Icarus Online is fantastic when you pull together friends and play cooperatively and seemingly click, but playing with random players where someone isn’t that great in their role, or slacks, it can be extremely frustrating. With this in mind you should also choose your friends wisely as each ship can only carry four players.

This game can be surprisingly deep, and as this is an airship battle game at its core I figure I should with the options that options the pilot will has when choosing their vessel. You can choose from six vastly different airships that not only vary in size, but gun placements and layouts as well; there’s surely a ship here for every pilot’s play style. The Squid is weak but is also a very quick airship that is more catered towards outmaneuvering your enemies and attempting to flank them; this is because it actually has more engines than other ships. The Galleon is the complete opposite, as it’s the largest and most resilient, but it is also the slowest to maneuver as well. This is the ship for the pilot that would rather fly into battles head on guns blazing, or even possibly ram other airships while not worrying about their own damage as much as other ships. The Goldfish is only behind the Galleon in overall resilience as it’s notably more mobile than its bigger brother, though it has less armor, so a concentrated attack will have you scrambling for repairs or fleeing away. The Pyramidion is slow to turn and maneuver but has the capability for high damage output, making it a safe choice; just beware of its low health. The Junker is slow but can turn and maneuver very easily, making it a great choice for second line support. Lastly, and my personal favourite, is the Spire. While it can turn very quickly to get gunners in position, it’s slow with the engine speed for travel. Three decks tall, all of which are connected with ramps, this ship gives you many choices for gun placement and is easy on the Engineer with most of the repairs in one area. 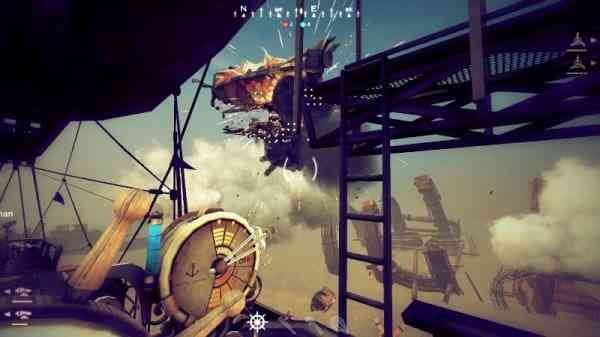 Each ship has many subsystems that have to be monitored, via icons, especially by the Engineer, once you start getting fired upon by enemies. The helm is the steering wheel that the Pilot uses to control and maneuver the ship in air, luckily though this is the part of the ship that can’t be damaged (as the pilot is almost always using it). The hull is represented by a ship icon and is your direct indicator to your ships remaining health level. The hull has a shield that once depleted, will start taking actual damage, and once the bar is empty your aircraft will blow up, forcing a restart. The balloon is the zeppelin icon that corresponds with your ability to ascend and descend in air. When damaged you won’t be able to ascend and you will slowly lose altitude, possibly leading to a crash which will destroy the hull and your ship. The engines are marked by propeller icons and come in two varieties: large engines are your forward and backwards propulsion, and smaller engines control your turning. If a large engine is broken you won’t be able to move the ship laterally and when the small engines are broken you won’t be able to turn, potentially putting your ship into a spin. Lastly are the weapon mounts that also come in small and medium size to correspond with its weapon type that is outfitted one the ship. When destroyed the canons won’t be useable until completely repaired.

As you can see, there’s quite a bit of strategy to be taken into account when you’re being fired upon, and an experienced pilot will make the absolute world of difference. A pilot can utter voice commands of what to repair and where to shoot and a pilot that knows that a specific engine or balloon needs to be a priority repair will determine your ships outcome provided the teammates listen appropriately. Like I said, this game can be deeper then people think, and this is a good thing making it a more enjoyable experience then not.

While the world and environment looks wonderful and detailed the details are completely lost with the animations. Yes, the game is very early and still evolving, but the animations for the crew are horrendous and very immersion breaking. Also, there’s no real reason to level up as there’s no bonuses and character unlocks for doing so at this time. I’m sure this will be added and fixed later on, but as of right now it’s not and it doesn’t give you much motivation to continue if you’re playing online with random people that aren’t up to snuff on their roles. That being said, with friends in your crew you’ll have a complete blast coordinating together and strategizing against the enemy team. If you rely on playing by yourself in random rooms, the experience won’t always be as positive, especially when an Engineer is using a canon instead if repairing the ship parts that are on fire. At the end of the day there is some fun to be had with this game, and there is definitely a lot of potential given how the game is still evolving even though you can play it now.  I am excited to see what Muse Games adds to Guns of Icarus Online in the future with new content too.