Grimmwood: They Come at Night Review – Harrowing and Gritty

Grimmwood – They Come at Night Review

Have you ever asked yourself what it would be like to spend a year in the woods? Building a shelter and living off the wilds? No? Well that’s what Big Moustache Games’ new title is all about. Grimmwood – They Come at Night puts you and other villagers in a forest filled with evil creatures. It’s up to you and the rest of your crew to keep the village safe, well fed, and sane. With tons of tools, traits, and friends by your side, will you survive the night? Only time, and I mean a lot of time, will tell.

Grimmwood tells the dark tale of a nation torn apart by war. Furious battles snuff out lives and leave the population with nothing to their names. With grit and determination, they step into the darkness of the forest to seek out a new life, to build a new home. When they enter they’re met with horrifying creatures that show them that they’re not welcome. Being humans, they’re stubborn, and set up a small village, hoping to deter the evil day by day.

While not the most unique tale to begin with, Grimmwood definitely sets its tone right. The gritty imagery of the opening narration tells the player that this is not a fantasy romp. No, this tale is one of desperation and survival. This makes for great immersion in the world. Your experiences will shape your story, and vice versa.

The sound and graphical design of the game mirrors this idea. Everything outside a few overworld models is hand drawn. On top of this, tweening and frame-by-frame techniques animate these graphics. The soundtrack is lovely to listen to, if not a bit inconsistent and buggy at times.

The game is a Point-and-Click/RPG hybrid and players will find the game engaging. Right off the bat, character creation is a must. Giving thought to your character and what traits they have is essential to your success. Bear in mind that randomized traits limit your character creation choices. Once you’ve dropped in, and I cannot stress this enough, watch the tutorials. Each tutorial in the settings menu is concise and helpful. You’ll have plenty of time to peruse them all.

The game consists of three different attributes of play; defense, exploration, and crafting. Each one of these portions play off the others and make for a well rounded, rewarding experience. Your first focus is keeping your village safe during the night. Scouting enemies at the tower reveals the level of attack you’ll be facing. This gives you a threshold to improve your defensive rating. By building and choosing to face the creatures during the night, your village’s chances of survival go up.

The game’s exploration has you traveling a hexagonal grid to explore the forest. You’ll discover various points of interest like ponds and cabins and face enemies. There’s plenty to do out in the woods, but caution is key! You don’t want to die alone out there, because one too many mistakes and it’ll be permanent. Make sure you’re armed with one of the many tools, weapons, and consumables to improve your chances. It’s best to travel with a companion as well, they’ll help you stay safe. Combat is turn based alone and timer-based with a group. If you’re in a bad situation alone, waiting for help is a viable option. You’ll likely fail should you attempt most combat by yourself. 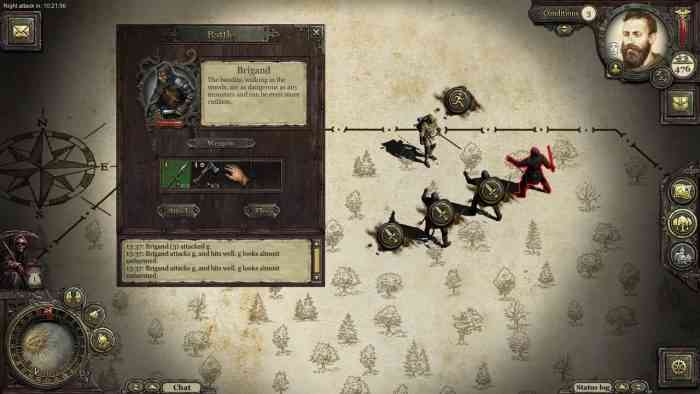 While exploring, you’ll find many items useful for crafting back at the village. Taking care to choose what you make is important. The entire village shares resources from storage. Don’t waste precious metal, rope, or tools on frivolous crafting. Crafting costs components, and depending on the difficulty it can fail. Make sure you know what you’re doing and choose your actions with care.

Each of these actions cost stamina, represented by your SP counter. You’ll have a wide pool to begin with but will notice it diminishing at a rapid rate as you travel and complete tasks. Watching your stamina is very important, as you’ll only be able to recover a large amount during the night. Consuming food and certain potions will up your SP to a certain point, no longer helping if you’re overfed. Resting will only net you one stamina point every five minutes or so. This brings us to my major point of contention with the game’s standard mode.

Time Was Your Ally but Now It Has Abandoned You

Grimmwood runs on a day-by-day cycle, 24 hours between every night attack. This means that there will be hour-after-hour where you’ll log out of the game, useless and out of stamina. In this sense, Grimmwood’s standard mode can feel sluggish. Forcing players to log in every day to use up their stamina may leave them feeling unsatisfied. With how fast stamina depletes, you’ll find yourself only playing for around an hour or two a day at the very most. The game’s Blitz mode provides a much faster experience but also harsher difficulty. It’s hard to find a balance between the two modes. Your play sessions can feel like short bursts of excitement followed by long waits.

If you’re looking for a gritty take on RPG survival and fantasy, look no further. While providing little bursts of harrowing, strategic survival, Grimmwood falls a little short. I can see myself spending hours in this world assisting my grim little village (pun intended). Unfortunately, the game’s normal mode isn’t designed this way. If you don’t mind playing for short periods every day I recommend giving this game a shot. Big Moustache Games does deserve to reap the rewards of the game they’ve crafted.