Greedy Guns Review – It’s All About the Money, Baby

I started playing Greedy Guns with no information except what the trailer puts on display and I must admit I am pleasantly surprised by the whole experience. This Metroidvania title brings forward a lot of great aspects of the genre, all the while keeping it fresh and unique. With a ton of game to play, Greedy Guns is a vibrant and versatile mix of action and adventure that’s sure to be a fun time.

Greedy Guns comes in hot, beginning with a battle against some ugly monsters whilst on a fast-moving platform along a rail. Although it may seem that this battle throws you into the game head on, in a sink-or-swim manner, there is a method behind the madness. These beginning moments of the game allow you to take in the sights and learn the controls, in a bit of a tutorial if you will. You can play as either Bob or Kate on a journey to kill monsters and retrieve the DNA for a greedy company called Holo Corp. Although simple in premise, the same cannot be said in practice. Players must venture through ever changing landscapes and areas, facing off against new enemies, thwarting the evil that reigns within the universe.

“Now, if you’re looking to reminisce about the times you spent with friends at the arcade, you may have found the perfect game here.”

If you’re wondering why you’re taking on such a big task, it’s because the aforementioned company, Holo Corp, wants the DNA sample from the primordial monster and is not shy about sending people into unknown worlds to get it. Now, Bob and Kate are the ‘greedy guns’ team that accepts the challenge, as long as they are paid well. Unfortunately, they aren’t the only ones that are money hungry, as Holo Corp is the only company available to buy weapons and other upgrades from and at ridiculous prices to boot.

Honestly, this game feels like a twist on one of my favorite franchises of all time, Super Mario. While the characters here have a gun in their hand to fend off the onslaughts of enemies, the adventurous designs of each of the ‘levels’, as well as the doors to new caves all feel a bit familiar. And not in a bad way either. You can take on the adventure either by yourself or with a friend, as Greedy Guns supports couch co-op. Of course, while this only adds to the fun, keep it mind that one of you will have to use the controller, while the other one keeps clicking away. 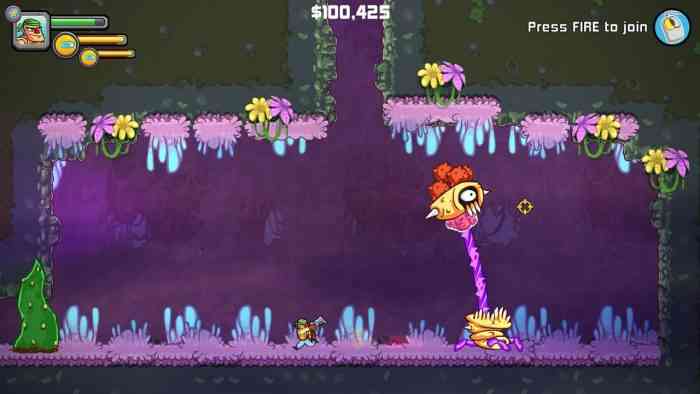 Something that definitely adds to the fun and replayability of Greedy Guns is that the levels and enemies seem to adapt to you, as you move through the large maze of intertwining caves and tunnels. As you put more time into the game, different and more challenging adversaries will introduce themselves. There are a lot of enemies that just appear as you move through the levels, and you will quickly realize that anticipating where they might pop up or fly in from is crucial to your survival.

“With a ton of game to play, Greedy Guns is a vibrant and versatile mix of action and adventure that’s sure to be a fun time.”

If you’re wondering just how difficult the controls are to master, don’t fret, as they are easy to learn. Because the game focuses on your ability to jump around the map, exploring and outmaneuvering incoming opponents, as well as killing whatever stands in your way, there isn’t a whole lot to learn. During the short ‘tutorial’ at the beginning of Greedy Guns, you have enough time to become comfortable with the basics. Now, if you’re anything like me, coming from the console and becoming a master of mouse and keyboard just isn’t in the cards. Thankfully, for the console players that want to get in on the action, this title is compatible with Xbox controllers. 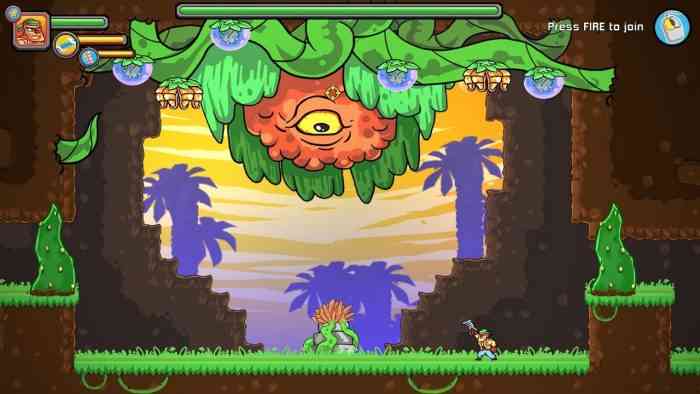 Although there aren’t many weapons and customization options available, players will gain a new ability that changes how to maneuver. This new ability allows you to roll through things that would regularly cause you harm and to explore areas that were previously unavailable. While this is a welcome addition to your movement, the customization and weapons available are lackluster. As an example, within the first 20 minutes, you will get to ‘upgrade’ your weapon to a rapid fire gun that unfortunately doesn’t really do any additional damage. These upgrades seem to lend themselves more to the aesthetic to the game overall than to provide any good functionality. Considering that this first upgrade costs almost all of the coins you’ve earned up to that point, this is certainly frustrating. Now, what I can’t figure out is whether this was intentionally designed, with the greedy Holo Corp at the helm, or if this was an oversight in the development of Greedy Guns. I’m more ought to think that it is the former, but unfortunately, it’s still an annoyance.

As a sprawling and interconnected 2D world, the bright and vibrant graphics pull you into the game even more. Now, if you’re looking to reminisce about the times you spent with friends at the arcade, you may have found the perfect game here. Between the graphics, the modern 16-bit soundtrack, and the entertaining gameplay, if you didn’t know what year it was, you might just feel like you’ve been transported to the late 1980s or early 1990s! This versatile little gem will have you playing for hours, as you try to mash your way through the waves of enemies and honestly, who doesn’t find that enjoyable? 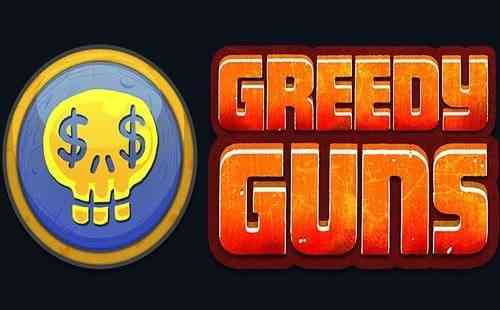