Let’s face it; Gravity Rush comes along at a time when the Vita needs a boost in a big way.  It has been well documented that Vita sales have been somewhat disappointing and the lack of recent games has not exactly helped Sony’s latest handheld machine thrive since its launch.  While at the Sony E3 Press Briefing in LA this year I was somewhat taken back with the limited amount of Vita games Sony was highlighting as I expected the briefing to lean heavily on marketing the Vita and its must have titles, but alas Sony spent the majority of its focus on PS3 games.  Fast-forward to five days after E3 ended and along comes Gravity Rush.  Prior to its release some considered Gravity Rush to be one of those “must buy” games for Sony’s handheld.  Well after some extended playtime I am certainly impressed, and there is no doubt Gravity Rush should absolutely be considered a must buy for many, but it is not without an issue or two.

In Gravity Rush you take on the role of Kat who is a strong willed girl seeking the means to protect her future.  One day Kat falls from the sky and wakes up beside a cat named Dusty.  Kat has lost her memory but quickly discovers that Dusty is able to give her a unique power that allows her to alter gravity and freely move about in this altered world.  Not too long after evil lurks and starts to invade Kat’s home of Hekseville.  This newly discovered evil comes in the form of Gravity Storm and the Nevi monsters; and they only seem interested in causing chaos.  So Kat sets off on a journey to combat the evildoers using her gravity altering powers, and of course she entrusts her new friend Dusty to help her. 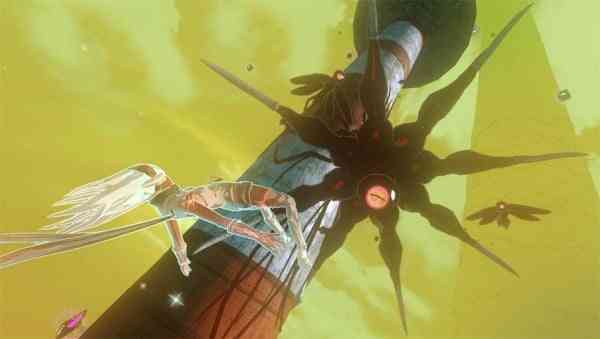 Overall, the story in Gravity Rush is not bad at all.  Much of it is told through cut-scenes and comic book panel picture stills offered up in between levels.  This mix of style generally grates me; however, I actually found myself interested in the story of why the world was literally being turned upside down, why the townspeople hated the gravity shifters, and how Kat came into her powers.  So bonus points for keeping me interested.  Regardless of the game’s storyline, Kat is the star of the show as she is charming, humorous, and I found myself able to emotionally connect with her.  And yes, she has a little sex appeal too.  So to that end, Gravity Rush is able to effectively create an atmosphere where the player becomes connected with the main hero, her cause, and of course her trusty side-kick cat.

Although the story is enjoyable, it does take a back seat to real enjoyment of the game; and that is altering gravity and freely moving about in the world.  Gravity Rush’s gravity-controlling mechanic works wonderfully as Kat can fly through the air simply by controlling which direction the gravity comes from.  She is able to walk on walls and pull off flying sidekicks from a city block away.  It is a sense of freedom unlike I have experienced on the Vita to date and it is these elements that make Gravity Rush one of the more unique games you will play on the Vita.  It very much reminded me of Crackdown as many of the same elements exist in Gravity Rush.

Controlling Kat and her gravity controlling ways was much easier than I thought it would be.   By pressing the R button Kat can float.  From there you can either tilt the Vita or move the right analog stick.  By pressing R again, Kat falls in the direction you want her to go.  It may not sound easy to pull off but the game does a terrific job at slowly introducing you to controls and the many things you can do in the game.  Within a matter of minutes you will discover that you can adequately move about with ease and the result is very satisfying. 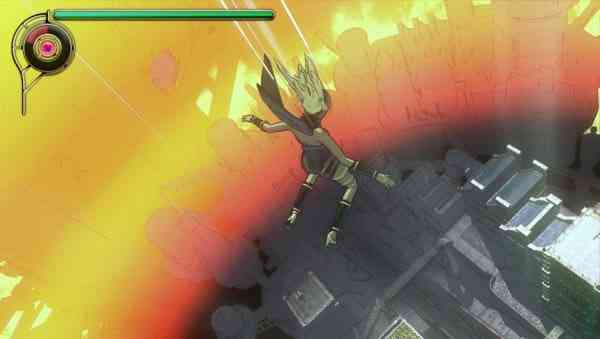 Freely moving about in the world in enjoyable and much of that enjoyment comes from locating gems that are scattered about the game’s levels.  Yes there is a single player progression with mission-based objectives, but the free roaming aspects while searching for the games are well executed.  Gravity Rush also has some role playing elements including a leveling up system which gives you incentives to collect as many gems as you can find.  There are also side-quests and optional villains to fight.  It is an open world game and it should take you around 8-12 hours to complete it depending on how much time you spend flying about the world, collecting gems and tackling side-quests.   It is these little elements that add the addictive factor and makes the game all the more enjoyable.

Throughout the game, Kat acquires new abilities, such as a gravity strike, and the power to move objects around.  Much like the Crackdown, the more powerful Kat becomes the more freedom she has,  You will also discover that much like collecting gems, leveling Kat up is not only addictive but rewarding as well.

As much fun as it is flying around the world and using all of Kat’s gravitational powers, the combat in the game does not quite feel as natural as it could.  Kicking enemies is accomplished with the square button and dodging attacks is accomplished by swiping the screen.  In the end, each of the controls is very responsive but it just didn’t meld as well as I had hoped.  Mid-air combat can be tricky as you need to aim at just the right spot in order to take them down.  One wrong move and you have to go back then re-position yourself with the right attack.  This requires some patience and I found that there were several times where I just wanted to give up on the enemies. 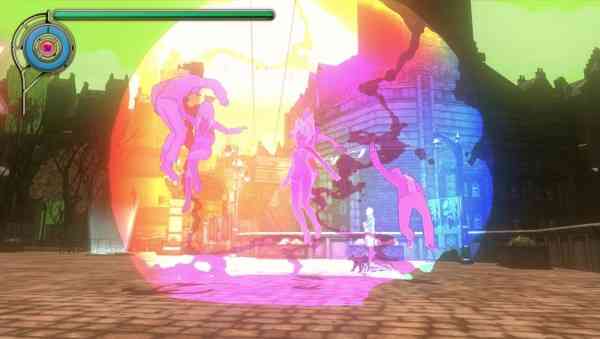 As far as the visuals are concerned, Gravity Rush is great looking game.  The animations are wonderfully designed and the characters come to life.  The artistic look is pleasing to the eye while the comic book cut scenes are stylish and fit the theme of the game.  The open world environments also feature some terrific detail.  When you consider Gravity Rush is a handheld game it is impressive.  Although there are a lot of positives, I did experience some clipping issues and the visuals are not always as sharp as they could be, yet at the end of the day Gravity Rush is easily one of the better looking Vita games on the market.

In terms of the games sound, Gravity Rush is a bit of a mixed bag.  On one hand the whimsical soundtrack is pretty good and the music suits the game perfectly.  I found myself humming some of the tunes afterwards and at no time did I feel like I would rather be listening to my iPod.  On the other hand the game features very little voice work and what you do get is in Japanese.  The dialogue is displayed via text and subtitles.  For me this cheapened the experience to a degree.  I can’t help but think some voice work could have gone a long way towards building a stronger connection with Kat.

Overall, Gravity Rush is easily one of the more positive experiences I have had on the PS Vita to date.  The gravity shifting elements work to near perfection and the game has all those addictive features that make it ideal for a handheld game.  Gravity Rush is by no means a perfect game, as there are certainly some areas that could have used some tweaking, but when you flush it all out it is a pretty darn good game and one worthy of any Vita owners attention and money.