Grand Theft Auto is nothing short of a pop culture phenomenon. Whether you’re a gamer or not you’ve likely heard of it. It is a game that has managed to permeate nearly every household in North America it seems and everyone is talking about it. It’s so huge in fact that in its first week of release it generated over one billion dollars in sales. If that’s not a testament to the quality that Rockstar has brought to the table with GTA V then I don’t know what is. Hands down Grand Theft Auto V is an absolutely fantastic and bitingly satirical peek into our North American culture at its best and worst (mostly worst). Love it or hate it this franchise will forever be embedded in our history as a piece of our ‘artistic culture’ for future generations to look back on and say “Man, they were really messed up back then!”

First and foremost it needs to be said that the city of Los Santos and its outlying areas such as Blaine County are amazingly realized in detail. If you’re looking for a comparison you might as well call this the Skyrim of the modern world. Los Santos itself borrows from many real locations in LA, to which I can attest, as I spent far too many virtual dollars riding their version of the lame roller coaster at Santa Monica Pier. As it stands if you can see it you can go there and every foray into the game inevitably ends up as a map crossing journey by land, sea and air to places unknown. It makes for an incredibly immersive experience. It’s so immersive that you can find yourself playing as an average citizen (likely a bad one, let’s be honest) for hours at a stretch without accomplishing a single mission or goal. You feel like taking a speedboat up a river through some rapids where you accidentally jump the boat into a redneck killing him dead so you can take his motorbike and ride it up a mountain so you can jump it on top of a gondola and ride the gondola back down the mountain? I know, longest question ever, but the point is… YOU CAN DO THAT AND IT IS FUCKING AWESOME. 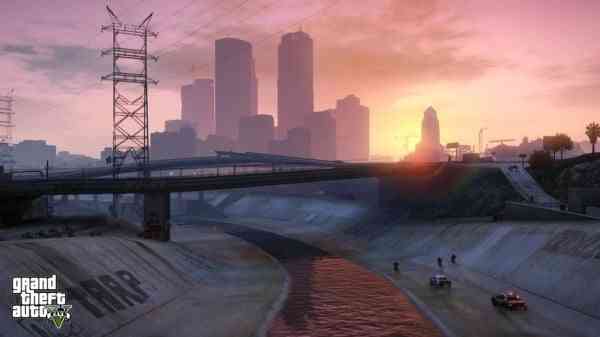 Your chaotic adventures throughout Los Santos will be experienced with three main characters. The ability to switch between them on the fly was a plus I found as every once in a while I’d plain and simple get tired of playing one character or another. You’ve got Franklin, your inner city gang banger, who is desperately looking for a way to score some cash to get out of his miserable hood life. Next up is Michael, an ex-con attempting to retire from his past with little luck. His family hates him and is falling apart at the seams and as much as every character in this game is basically a scum bag he’s the only one I found I could identify with just a little bit as he tries to bond with his son or fix his relationship with his miserable hag of a wife. Finally you’ve got Trevor, a horrible piece of humanity with not one scrap of morality. Whether it’s cooking meth up in the desert or indulging in his absolutely depraved sexual behaviours Trevor is your go to guy for everything awful. Despite being the worst of the characters he is hands down the most entertaining as well. If ever there was a video game character for some right wing politician to call out as ‘everything that’s wrong with violence and deviance in video games’ then he would be your prime candidate. I absolutely fucking love Trevor and hate myself just a little bit for doing so.

These characters are all so well fleshed out in not only their stories and backgrounds but their portrayals as well that you can’t help but be drawn in. Experiencing this game is the ultimate interactive movie as far as I’m concerned. Not only the main characters but the people they surround themselves with. Every secondary character is acted out to perfection making you believe they could be real people in a real world. Granted it’s a really screwed up world for sure but it’s still believable. That’s the real magic in Grand Theft Auto for me… it sucks me into this universe one hundred percent. The fact that GTA relies heavily on satirizing everything we hold dear in modern society is another draw. In a way it can be a sad reflection of what we do day to day in our own lives. NOTHING IS SAFE from Rockstar’s smack in the face. You’ve got LifeInvader the obvious taunt of FaceBook, the iFruit and Droids cell phone wars, Righteous Slaughter 7 the king of video games… if you can think of it there’s likely a send up of it in GTA for Rockstar to take the piss out of.

After all of this I still haven’t even touched on the gameplay! There is so much content in this game that you’ll quite often be pulled in many different directions at once but the main plot of the game will definitely keep you advancing through the story line at a solid pace. Once all three characters come together you’ll be planning and preparing for heists, whether you choose to go in quietly or let all hell break loose is up to you, and have a great time while doing so. Straying from the main plot you’ve got a multitude of side missions with ‘Strangers and Freaks’ quests or just random events that happen in world that you can choose to interact with. The Strangers and Freaks quests are wholly entertaining in their own right despite being what we would call a side quest. You’ll find yourself helping paparazzi stalk a teenage actress or a cracked out junkie repossess vehicles with a tow truck and be fully delighted in doing so. Don’t feel like doing any of that why not go throw yourself out of an airplane just for fun? The Hobbies and Pastimes available to you range from parachuting to racing to quite simply taking in a movie. Remember how I said you’d be pulled in many different directions at once? I wasn’t kidding. 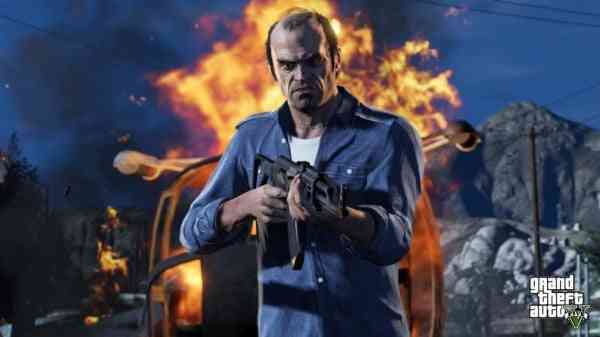 Of course nothing is truly possible without the Benjamins (that’s an American $100 bill for all you uneducated folk). If you want to succeed you’ve gotta make some money son! In true open world sandbox style Rockstar gives you plenty of ways to do it. You can play the stock market (which very smartly reacts to in game situations), you can buy properties and businesses or you can quite simply knock off a liquor store. Again, as with almost everything else in this game, how you do it is up to you but if you want to pimp out your ride or get your hands on a bad ass piece of weaponry you’ll have to figure out how to bring home the bacon.

Speaking of weaponry the combat mechanics are hands down the best that Rockstar has ever brought to the table. Not only in this franchise but others as well. I thought that the shooting mechanics were fairly well realized in Red Dead Redemption but they’re still improved upon here. I found it fluid and easy to adjust to right from the start which is something I can’t say for past iterations of the franchise.

All of this comes together in the prettiest game of the GTA series as well. It’s not hard to tell that your hardware (Xbox 360 for this review) is being pushed to its absolute limits. While everything you see is certainly rendered beautifully you will notice the odd frame rate slowdown or pop-up visual but in all honesty that is something I’d almost expect in a game of this scope on current gen machines. None of these issues are even remotely large enough to remove you from the game world or really be marked down as a negative.

The world of Grand Theft Auto V is undeniably a masterpiece and has set a very high bar for sandbox gaming not only for this generation but for the next gen which is so closely upon us. Beyond the game’s story line you’ll be able to put in hundreds of hours just wandering the city streets and never be bored doing so. Quite honestly, writing a review for a game of this scope is almost impossible because no matter how many words I type I feel as if I’m barely scratching the surface of what you can do. Whether you’re a fan of open world gameplay or not you owe it yourself to at least try this game as you might very well be surprised with how much you love it. Bottom line, never before has it been this good to be so bad.

Next Dead or Alive 5 Ultimate (PS3) Review – Is This Truly the Greatest DOA Offered?
Previous FIFA Soccer 14 (Xbox 360) Review – Not a Major Overhaul by Any Stretch.