Who doesn’t love playing minigolf?  Putting that ball through a clowns’ mouth or trying to navigate through a spinning windmill, every attempt seems like a trick shot you cleverly planned.  When I think minigolf, that’s what I think of.  Of course it’s also about the wacky course setups that you and your friends tackle in an effort to outdo each other.  Well now you can play minigolf on your 3DS.  If Fun! Fun! Minigolf Touch seems familiar to you then you probably played its older brother Fun! Fun! Minigolf for the Wii, which can be found on the WiiWare store.  The 3DS game, found on the 3DS eShop, is essentially a port of that game, but it lets you play on the go.  Be warned though, if you have played the Wii version, this is the same game in almost every aspect.

Fun! Fun! Minigolf Touch boasts that it has 81 holes set across America, Asia, and Europe, but that’s a little misleading; I’ll get into that later on.  There are your standard minigolf courses and there are also some Trickshot courses once you’ve unlocked them with your in-game coins.  The game has to be fun since it’s got “Fun” in its title twice right?  Unfortunately this is not the case.

A minigolf game seems like it would generally be easy to develop.  Design and implement the ball physics and then design some crazy and wacky courses to play on.  In Minigolf Touch it seems like neither was really done to the fullest extent here and that is unfortunate.  You aim your shots on the bottom screen with the stylus, though it is somewhat easier to maneuver with the circle pad.  Using a top-down view of your golf ball you start your shot by placing the stylus on the ball and dragging it down to increase the power.  As you determine the power of your swing, there’s a dot that appears over the ball that sways from right to left, and your goal is to release the stylus from the screen once it’s directly in the middle of your ball.  Releasing right in the middle allows for the best accuracy.  Normally this isn’t an issue, but if you accidently go too far downwards and touch the bezel of the bottom screen, the ball will shoot pre-emptively when you do not mean it to.  This can be frustrating and you have to be careful you don’t do this. 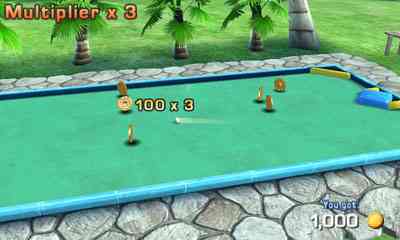 Minigolf Touch starts with only one course available, and as you begin to make your putts you begin to earn coins.  You spend these in-game coins unlocking new courses, Trickshot courses, extra Trickshot balls, retro sound effects, new clubs (for aesthetic purposes only),  pro cup courses (which are mirrored versions of the normal courses), super cup courses (which are normal courses, but with obstacles in the way of your ideal shot path) and the ability to play as a Mii.  So, as I said earlier, the game boasts that there are a large selection of holes, but with the pro cup courses simply being mirrored holes, and super cup holes only adding a few bumpers to the normal set, the total claimed number is misleading.  I should note that playing the more ‘difficult’ courses earns you substantially more coins for each ‘better-than-par’ shot that you sink, so you may want to invest in the harder courses first to earn more coins.

While the courses are very short and simple, there is the odd loop that’s fun, but in end the majority of the holes are bland in design as they come down to just simply trying to figure out the proper angle to bank your shot.  I found that one of the oddest mechanics in the game has to be the ‘out of bounds’ system that really makes little sense.  You are forced to get your first shot within a set ‘boundary’ near the hole or else your shot is considered ‘out of bounds’ and you have to retake it from the beginning again.  While it’s nice that you won’t be stuck behind an obstacle and wasting shots to get out from behind it, it goes both ways, as your ball can reach the ‘out of bounds’ area but it may roll outside the designated boundary and it doesn’t count, forcing you to shoot from the beginning once again. 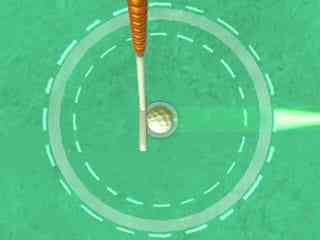 Things like this essentially turn the game into a lot of trial and error until you learn each course, but learning them takes quite a while as there is no way to simply retry a specific hole.  Once you triple bogey a hole you are forced onto the next one; there is no retry option.  Surprisingly, there’s also no way to practice a single hole from the main menu either, so you’ll need to go through a whole course to get to a specific hole if you want to practice it.  Being able to practice certain holes would have been very welcome and it’s something I think they should have included.

Even if you don’t finish the course under par, you’ll still pass it, but the real objective of the game is to earn coins by finishing a hole in little strokes as possible.  Because of the auto-pass for courses, there’s really no challenge.  The coin requirements to unlock the last few courses jumps drastically, which wouldn’t be too bad if the difficulty for these courses gradually ramped.  Unfortunately it doesn’t, as you’ll breeze through the first easy cup with a few hole-in-ones, then most likely triple bogey many holes once you try out the Europe courses.  Because you are unable to simply practise courses, it becomes frustrating and earning coins mid game can be painful unless you go to the Trickshot holes, which are essentially trying to gather all the coins with a set amount of balls. 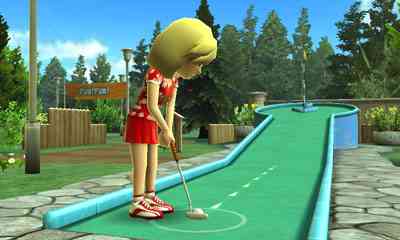 Once you realize that the pro and super cups add no new holes or obstacles and are essentially the same three courses ‘redone’, it really gives you a “meh” feeling.  I was expecting some awesome timed windmill shots or something, but alas, there are not many real cool holes aside from the odd ones that I can count on a single hand.  The first time you play each course is entertaining, but by the fourth or fifth though, not so much, especially on the more difficult holes that almost seem unfair at times.

Visually the game is somewhat underwhelming.  Sure, your Mii, or any Mii from your collection, looks just like they do normally if you play with them, but the game’s 3D effect is unforgettable and doesn’t add anything to the experience.  You are actually better off just turning the 3D slider all the way down saving yourself some battery life, as you probably won’t be playing this for too long anyways.  The camera angles when trying to aim your initial shots are usually more of a pain than helpful, as your head seems to be in the way of your aim-line most of the time.  I don’t know if the developers took into consideration the 3DS’s screen or not, but it seems like the game is not refined in this area.  As for the sound, the crowd will gasp as you get it near the hole, but outside of that, there’s no memorable music or sounds in any way.

If you learn the courses quickly, or get very lucky, and earn your coins rapidly, then Fun! Fun! Minigolf Touch is an incredibly short experience.  There is no multiplayer or leaderboards to speak of and once you’ve mastered each hole there is very little incentive to continue playing once you’ve unlocked everything, not to mention doing so isn’t that difficult either as I “finished” it in a sitting, leaving the longevity something to be desired.  The fact that you can’t turn off the out of bounds gameplay rule also makes it frustrating at time.  At the end of the day I’d say the game is fun for a very short while, but Fun! Fun!, as the name implies, is greatly stretching it.