Freedom Finger is one of the most delightfully surprising games I’ve played in a long time. It’s a side-scrolling, arcade Shoot ‘em up that calls itself a “bat$#!% crazy space shooter,” and that title could not be more fitting. In Freedom Finger, you pilot a middle finger flying through the air, killing anyone in your path as you blast through kooky scenic backgrounds set to an incredible tracklist. It’s hysterical, politically incorrect and certainly not for the faint of heart, and it’s also one of the dopest arcade shooters I’ve ever played.

The premise of Freedom Finger sets you up as “Gamma Ray,” an American pilot reporting to Major Cigar, an off-color, cigar-chomping, red-white-and-blue-bleeding military man voiced by Nolan North. Your freedom fighting airship is shaped as a sideways hand extending a middle finger that can shoot, form a fist to punch enemies, and grab enemy ships to use as your own. Your initial objective is to open fire on anybody you see in the cosmos as you fly toward the moon to fight the Chinese who have landed there, and as you play on, things continue to get more and more bizarre.

Now That’s What I Call Music

Freedom Finger is, above anything else, all about the music. Each level is the length of a different song, and the tracklist slaps as you blast through a series of different hand-drawn scenes. The first level is set to “Prehistoric Dog” by heavy rock band Red Fang, and it’s a perfect opener that decorously sets the badass tone for the rest of the game. As you fly through outer space, a slew of strange objects shoot at you and occasionally match up with the beats and pauses in the song. It’s incredibly satisfying to watch the rhythmic choreography of all the moving parts on the screen as they stop in place or shoot bullets on beat. 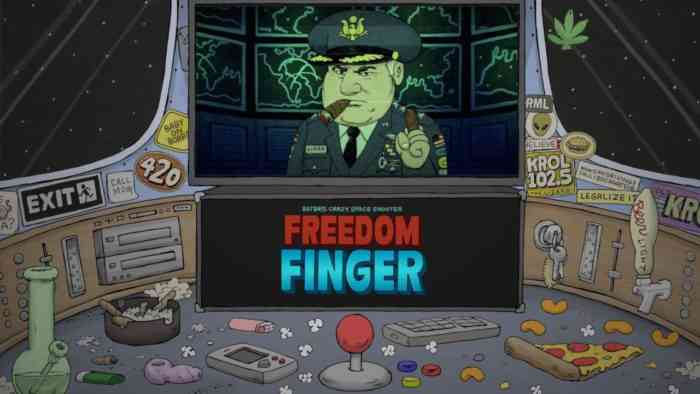 After the initial space level, things take a turn for the stranger. You’ll have a run-in with the Russians, narrowly escape with your life from a rampant space alligator, and take on the form of a sperm attacking a giant egg amongst a sea of intestines as an acid rock song by Ty Segall and White Fence drives the level forward. You’ll battle a groovy flower jamming out on a bass guitar, as rainbows and peace signs float past you to an original track by Aesop Rock. Yeah, ‘batshit’ is almost an understatement.

Though the audial experience is the true bread and butter of the game, Freedom Finger wouldn’t be close to what it is without its fantastically outrageous artwork. Each level feels completely different than the one before it, and everything is drawn in an eccentric, doodled-in-the-margins style. The enemies take on different forms in every level, and it’s a treat to see what the game will deal you next. One moment you’ll be shooting against standard airships and floating asteroids, and the next you’ll be taking on toy soldiers or giant lips blowing noxious hearts your way. I don’t want to spoil too many levels for you, since discovering all of the new backgrounds and the songs they are set to is one of the game’s strongest rewards.

While Freedom Finger seems as though it could be gimmicky, it’s anything but. It doesn’t rely on the music to make it, nor does it rely solely on its over-the-top humor. The gameplay itself is extremely challenging after the first couple stages, and it will take you many tries to survive and progress to the next one. There is a campaign mode that weaves the levels together into an offensive and hilarious story you’d likely see in an episode of South Park, or you can jump into Arcade Mode and skip to any stage you’d like right off the bat. Surprisingly, the story doesn’t come across as a half-assed afterthought or a meaningless part of the gameplay. It features an all-star voice cast including John DiMaggio, Eric Bauza and Sam Riegel, and none of their talents are used in vain. 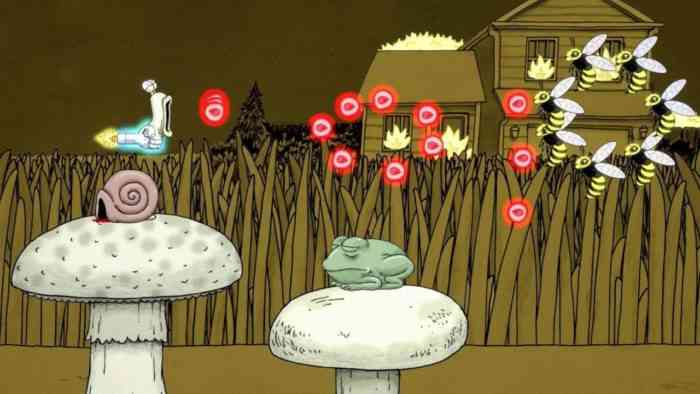 Part of what makes the gameplay so challenging is the initial time it takes to figure out how enemies are going to move or spread their bullets, and experimenting with which enemies can and cannot be punched or grabbed. Punching is one of the most effective ways to slay in Freedom Finger, but certain enemies are immune to it or will harm you upon close impact. You also have the option to either grab and throw enemies at others or grab and use them as your own personal gunship. However, there’s no telling if you’re going to be able to successfully grab someone or not. You just have to test it out as you go and see what bites.

The difficulty of the game can be adjusted, but I found that dying and restarting levels was ultimately pretty pleasant given the great soundtrack. Rather than being annoyed and wanting to move on, I loved all of the music so much I didn’t mind listening to the same songs attempt after attempt.

This Is Your Brain on Freedom

If you are someone who is easily offended, I’d probably advise that you steer clear of this game. It pokes and prods at controversial topics such as communism and militarism, and each loading screen even displays ridiculous quotes from past presidents that will have you face-palming and thinking they can’t possibly be real. Some of my favorites included, “We choose truths over facts!” by Joe Biden and, “Rarely is the question asked: is our children learning?” by George W. Bush. Before this game, I’d never wished for longer loading screens in my life, but I found that they were so fast I never had time to read the lengthier quotes. Oh, and before you ask: Yes, I looked them up and yes, the quotes are real. 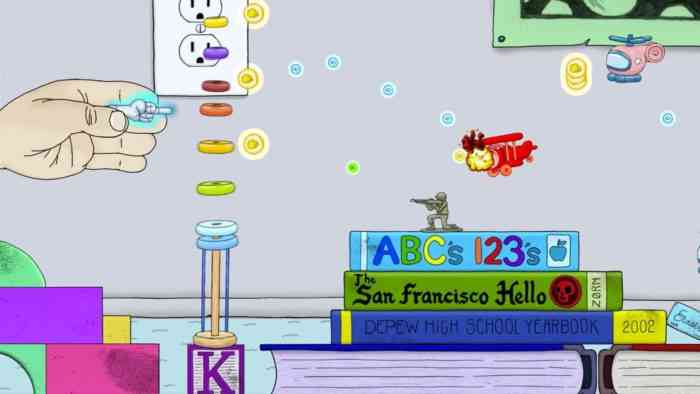 It’s hard to find the words to give justice to the radness that is Freedom Finger. In order to understand it you really need to crank it up to full volume and just go bananas on your own. I had no preconceived notions about what this experience would be before I picked it up, and I couldn’t be more pleasantly surprised. Freedom Finger had me hooked from the first minute all the way until the end of the game — which is a real treat, since the final stages are set to original tracks by Aesop Rock, a rapper signed to Atmosphere’s iconic hip-hop label “Rhymesayers.” The music is phenomenal, the artwork could be something straight out of Hunter S. Thompson’s brain on drugs, and the gameplay is difficult but fresh. Grab a good pair of headphones, suspend your political correctness, and give Freedom Finger the chance to be experienced the way it deserves.