First released back in 2006, Final Fantasy XII represented a departure from the usual rhythms of the franchise. Rather than a squad of heroes facing off against their foes in a disconnected battlefield, combat was tied to the same world you explored. Rather than direct commands, battles were a nested series of strategies let loose when the fighting started. Players had the same limitless depths to explore, they were merely prompted to take a different route in doing so. Although the story was multifaceted and layered with meaning, most players kept coming back for the moment-to-moment grit buried underneath. The HD remaster, Final Fantasy XII: The Zodiac Age, holds a similar appeal. You may have come for the updated graphics and the orchestrated music, but it will be the bones of battle that keep you here.

You command a ragtag crew of rebels with disparate backgrounds, all fighting to loosen the Archadian empire’s grip on the tiny kingdom of Rabanastre. The narrative will undoubtedly feel familiar, but with a tinge of maturity. Yes, there’s a clear-cut villainous faction, but the ultimate goal of the protagonists is peace, not annihilation. There’s a clear message about the dangers of blindly lusting after power, one that I got a better sense of this time around. Although I played the original version when it was first out, I feel like the inherent wisdom of certain side characters was initially lost on me. Lord Larsa might be a child but he’s the only one with a proper head on his shoulders for most of the story.

“this game manages to look crazy beautiful most of the time.”

When I first played a demo of this game, I was floored by how good it looked. The amount of detail in Vaan’s armour, the environments, and the enemies was staggering. To be fair, it still is. However, the high definition graphics make the systemic flaws all the more glaring. I have a feeling that the original vision for this game involved paintings come to life. Concept art gave freedom to move through lush worlds with no restrictions. This is a noble endeavour, but it falls short sometimes with people’s faces. Everyone looks like they have heavy crows feet or extensive scarring. Vaan, in particular, has these strong white lines that obfuscate his age. All of the men also have these insane washboard abs. In the original game, they were just fuzzy enough you could imagine them as muscles. Here, they look carved from stone and slipped on top of their actual stomachs. In general, it feels like certain assets got more remaster attention than others. A map hanging on the wall is a jumbled mess of pixels, while you can more or less count the hairs in Reddas’ beard. If you’ve got the right screen for it though, this game manages to look crazy beautiful most of the time.

One of my complaints about the original game was the pacing. You would be blistering along, hitting story beat after story beat with expert precision, when you suddenly hit a wall. Instead of a whirlwind tour through a magical world, you’re stuck grinding levels for a few hours so some insufferable boss doesn’t crush you under his thumbs. None of this feels like a problem anymore, thanks to L1. With a tap of that button, everything doubles or quadruples in speed. Level grinding is wrapped up in minutes. Navigating dungeons is a painless affair. Harvesting loot is a genuine pleasure. The licence boards, once an unconquerable desert of level-grinding, feel downright manageable. With this simple change, you’re free to focus on things like strategy, exploration, and story. 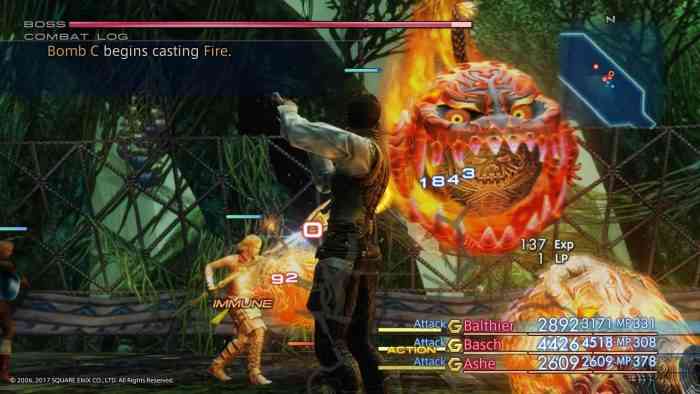 When Final Fantasy XII first came out, your characters were locked into their jobs. In fact, things like class and character were practically meaningless. Everyone could learn every skill and use every weapon. The Zodiac Age lets you pick the job for each character almost immediately. These choices are permanent, though. I spent almost a full day mulling over who would do what job. Who would use spears? Who would heal? Who would be stuck in light armour? Although my choices were agonizing, they added an extra layer of significance and excitement to the gameplay. If your three-person squad has no white magic, you’ll be forced to line up a string of complex gambits rooted in items. Or you can make smart use of Technicks and save the day that way. You can’t just barrel your way through with whoever you want anymore, and the game is all the better for it. There’s also a whole list of tiny changes I haven’t gotten to yet. You can’t get certain items as easily anymore. There are new items you can acquire for status effects. That old trick for getting a Zodiac Spear by avoiding certain treasure chests doesn’t work anymore. Essentially, this version of the game has been patched and updated for balance purposes. It’s a common enough occurrence, though not for a game from 2006.

If you’ve made your way through the regular game and find yourself itching for a new challenge, there’s always the Trial Mode. You’re pitted against a series of battles that quickly escalate in difficulty. You encounter the same enemies you’ve seen in the normal game, but they’re smarter and tougher. So far my runs through the trials stop cold when I meet up with the mind flayers. I’m told that there’s a more dangerous version of the game’s hardest boss awaiting me if I make it that far. I have my doubts this will ever happen, but I’m going to try anyways.

“I spent almost a full day mulling over who would do what job.”

For all of its new polish and extra content, this is still Final Fantasy XII at its core. You won’t be getting a brand new game when you pick this up, especially if you’ve played it before. On the other hand, if you have played this game before, you know all too well how engrossing it can be. Trust me when I say that one of the best games in the series can get better. Believe me when I tell you that it has gotten better. The Zodiac Age won’t be for everyone. The pacing is still weird, even if it is breezier. The battle system will still turn you off if it did the first time. Still, this is Ivalice in all its glory. Enormous, beautiful, flawed and fiercely compelling. Even if you’ve already put a hundred hours in the original, Final Fantasy XII: The Zodiac Age can get its hooks in you, and deep.