Dragon Quest Heroes 2 is a Musou game set in Square Enix’s enormously popular RPG universe. The one with the blue slimes and the Dragonball hair, not the one with the Calvin Klein models swinging huge swords at each other. You play one of two promising young prodigies from the Harba military academy, all trained up and looking for some way of testing your skills besides fighting one another. Lo and behold, war descends upon the land for the first time in a thousand years! This triggers a series of encounters allowing you to collect your party members, take on armies of cartoonish beasties and save the world. I haven’t played many Musou games in my life. In fact, Dragon Quest Heroes 2 might be the first one in over a decade. Thankfully, the core mechanics are easy to slip into without too much trouble. While I loved the fighting, the other systems grafted onto the core Musou experience felt a little lacking. 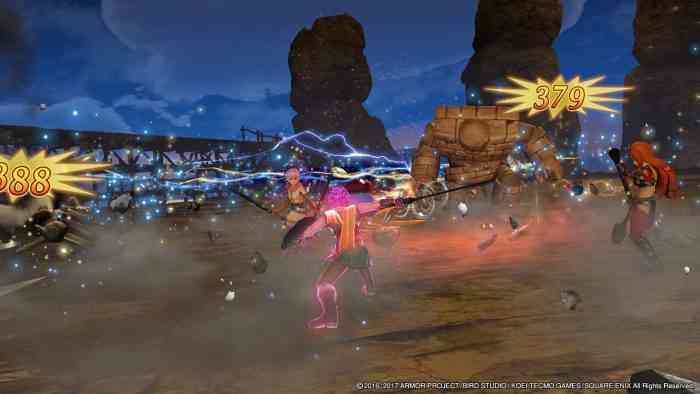 Let’s talk about the combat. Any game poured into this mold is going to feel familiar. Dragon Quest Heroes 2 is no exception. If you’ve ever played a dynasty warriors game, or any of the many Musou spinoffs out there, you already know what you’re getting into. My lack of experience in the sub-genre meant that the formula felt fresh. Slaying huge groups of enemies feels great. Your abilities are powerful and tactile, with opportunities abound for using them. Unfortunately you don’t run into massive armies very often, at least not in the beginning. I remedied this issue by using the mini-map to seek out the largest cluster of monsters possible, thus allowing the greatest bang for my buck when it came to spells. There’s multiple ways to trigger your special attacks. If you have the controls set to manual, the right button combos will set them off. This is the hardest, yet most satisfying, way to get your specials happening. The ‘quick controls’ setting lets you effortlessly pull off combos by holding a single button down but man, does that ever get boring fast. The third way of unleashing special moves is just open the menu and trigger them manually. The trouble with this last method is that you actually use up MP doing so, unlike the first two methods. I found some good middle ground through spamming regular attacks until my magic filled up, then draining the bar to zero with a barrage of special moves. Most enemies are wheat before the scythe, which is super fun… at first. Eventually, you find yourself longing for boss fights to break up the monotony. I actually changed the controls back and forth a lot, switching to manual inputs for bosses and mowing through regular baddies on autopilot. This is also a Dragon Quest game, which means there’s more opportunities for level grinding. Changing classes means starting from level one. This is right and normal, the way a good RPG should be. But if you were getting bored of the basic combat rhythms already, switching classes is not going to make things better.

“Most enemies are wheat before the scythe, which is super fun… at first.”

I’m a little torn about the graphics. Yes, they are some top-notch visuals. The characters look as detailed as they can given the art style. That’s part of the issue for me, though. These designs are so charming and nostalgic in 2D. Akira Toriyama’s art is iconic, with an aesthetic that connects eras to one another with natural fluidity. Something about the more “realistic” 3D versions just feels off. Chalk it up to my own ingrained retro bias. Or maybe I’m just attached to these games as I remember them, with the doofy sprites that didn’t even move. Those sounds, though. The music, the audio cues and the sound effects will be familiar to any fans of the series. I hope they never change that spell-casting noise. The same goes for the sound of Zoom being cast. On the subject of sound, the voice acting in this game is delightful. Around the same time we started getting Dragon “Quest” games instead of Dragon “Warrior” games, they started sounding and reading a lot more British. Heroes 2 keeps that same level of charm and polish, making the cut-scenes a delight to watch. The male hero in particular (I named him Lazzidoo) has a ton of personality. He’s brash, impulsive and endearing. I didn’t gel as much with most of the other characters. The original heroes feel fleshed out, while the guests from other games are more or less coasting on their celebrity status among the series’ fans.

If you’re stuck on a tough battle, or if you’re feeling charitable with your peerless skills, there’s always multiplayer. Dragon Quest Heroes 2 has a matchmaking system that lets you join or recruit for any of the story battles and magic maps throughout the game. There’s no level-based assignments of heroes, meaning you can step into a fight while being wildly overqualified for the job. I took full advantage of this, recruiting super-powered heroes for major events. When you have a full roster of fighters ready, the experience is a total blast. Specials rain bloody wrath on hordes of scattering beasts in every direction. The whole battlefield is a chaotic mess. If you can’t find a full roster to use? You’re in trouble. I went into a boss fight with one other player. He disconnected a quarter of the way through the battle, which meant game over once I was killed. A solo fight lets you swap between your other three surviving members. Unfortunately, this is shut off for group battles. My advice? If you can’t get three brave souls to follow you into a boss fight, just do it solo. The system isn’t adaptable enough to recognize you’re suddenly fielding an encounter by yourself. Those battles wherein you’ve got friendly fighters on your side are breezy jaunts through hell, and very much worth the patience needed to put them together.

Some of the RPG elements work better than others. Having the ability to change classes? Amazing! You can pick your team based on totally superficial qualities and tailor their combat specialties to perfection. Going into the menus and picking status and skill upgrades is not as fun. It got to the point where I would get a new character, see 55 unassigned points by their name, and groan. Beyond the actual combat skills, everyone’s stat upgrades are almost identical. I had the same problem with buying equipment. Maybe I’ve been playing RPGs for too long, but going to a shop and trading money for a slightly better sword is so boring. If there’s concrete differences between weapons, great! Let the shopping commence. But Heroes 2 limits characters to one or two compatible weapon types. Torenko has one kind of weapon he can use for his base class. Making me wander over to the shop to purchase a stat upgrade already behind a progression gate is so pointless. If you’re going to change the weapons in stock based on level/story progression anyways, just automatically upgrade my weapons when I level up! Especially when the only difference is a single stat going up when you equip the new item.

“Making me wander over to the shop to purchase a stat upgrade already behind a progression gate is so pointless.”

Alright, lightning round! I love using monsters in combat. It adds extra depth to an already robust skill system, plus the limited space you have for summon tokens forces you to carefully choose what you pick up. The lock-on function mapped to the right analog stick doesn’t do anything but swing the camera around. Is this a Musou thing? I don’t know, but I don’t like it. The non-combat quests slam the brakes on the game’s otherwise blistering pace. Running around a town talking to every single NPC is mind-numbing. The bosses in this game are so much more interesting than the regular enemies it’s unreal. I keep hoping there’s a mode I can unlock with nothing but boss fights. Did I mention the spellcasting sound? It’s so good I want to use it as a ringtone. I’ve been playing so many games with stamina meters recently that running forever feels like driving a Cadillac with chrome rims. One of the boss fights was made longer by removing the boss from the arena every so often. This didn’t make the fight harder, only longer. They’re not the same thing!

The Dragon Quest Heroes series is an ambitious undertaking. Blending arcade-style action with RPG elements is a tricky balance, one that Heroes 2 doesn’t always manage to maintain.While it might bite off a bit more than it can chew, the end result is still good frantic fun. If you’re hungry for more Musou action, a Dragon Quest fan, or both, you can’t go wrong with this game. 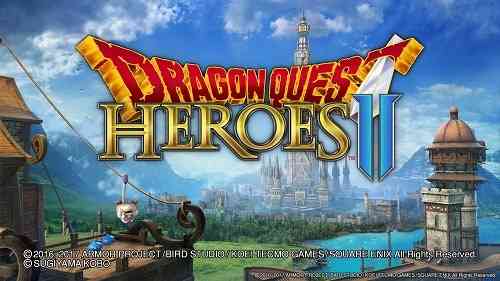