Dragon Age: Inquisition Review – BioWare’s RPG Epic Firmly in the Running for Game of the Year

With the upcoming holiday season everyone is looking for that special gift to give that will be so perfect they win Christmas. At least, that’s what I assume everyone’s intention is with gift giving. With a lot of serious game releases coming out for just that reason, it’s usually hard to choose the proper one amidst all the excellent titles on the shelf. Well, this year is much easier as Dragon Age: Inquisition storms in to not only be a perfect gift but it puts itself at the forefront of the ‘Game of the Year’ race.

Inquisition brings you back to Thedas, the setting for both of the Dragon Age games before it. Your hero is the only survivor of a massive explosion that has not only wiped out a good deal of the upper levels of the Chantry, but has also rent the sky, leaving rifts all over Thedas allowing demons to come through from the Fade. Luckily, not only did you survive but you were also gifted with a strange mark that can close the rifts. With the Chantry in disarray and the templars and mages locked into a war, you and a handful of familiar faces begin an inquisition to deal with the threat of the rifts. 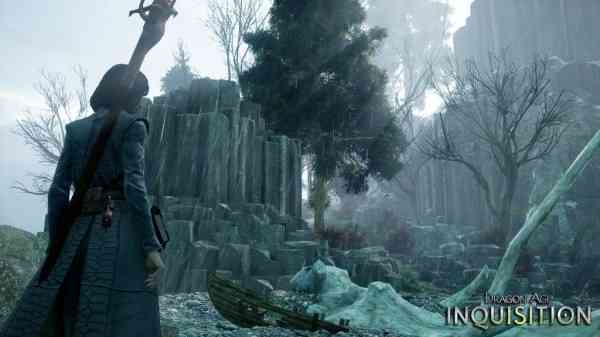 As you can probably tell, the third game closely follows the story of the first two and crafts this entry around the events of what has happened before. Just in case you’ve forgotten, they’ve got you covered with a feature they call ‘The Keep’. While kind of a pain to go the site to use it, it allows you to go through the events of the first two games and create the backstory to Inquisition and shape the world. It’s also quite a handy refresher on the world and the lore of the Dragon Age series which was helpful to say the least. I can’t recommend strongly enough to use this feature before launching into Inquisition.

The character creation suite is quite in-depth to say the least. While all the usual options are there, your choices for them are extensive allowing you to create very unique characters. They’ve also put in a sliding graph for changes to eye-width and cheekbones etc. that really streamlines the process and makes it far less tedious than it used to be. You’re going to be looking at this face for a big chunk of hours so take your time, play around with all the options and find the perfect face. Or the most ridiculous, however you want to play it.

The gameplay itself is very akin to the first game. Whenever you venture out of your home base, you get to take three friends along for backup. The combat system is a quicker and more refined version of the first games. You get the tactical screen where you can dictate what your entire party does in the battle. You can bring this screen up at any time, giving you complete control over every combat situation. Or, if you’re like me, you can just throw yourself into the melee and let everyone take care of themselves. The enemies that you can kill are varied and it always makes the fights interesting. There were some unfortunate times where a group of bandits wandered in while I was trying to close a rift, making for some hectic fighting as demons rained magic and bandits shot me full of arrows. Of course, a game named ‘Dragon Age’ wouldn’t be complete without being able to finally fight some dragons, but I’ll let you get into all that fun on your own. 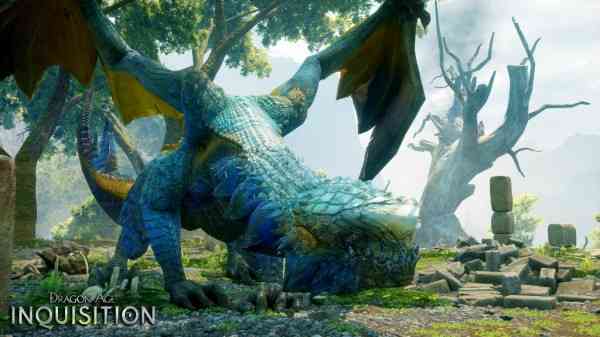 As you slay enemies and complete missions, you level up and unlock new moves and attacks depending on which skill tree you choose. Choosing ‘sword and shield’ unlocks moves to use with your weapons while doing something like ‘vanguard’ is more about passive abilities that will accentuate your attacks and give you an edge in battle. The crafting aspect of Inquisition is some of the best I’ve encountered in a game. While it doesn’t break the mould in the actual process of crafting, it allows you to make items that are more often than not better than what you’re carrying already. I know this sounds like what it’s supposed to do, but I’ve rarely encountered this in other games. I was pleasantly surprised to craft an axe that was substantially better than any weapon I had in my inventory or what I’d picked up for some time.

The most impressive aspect of the game is its sheer scope. The game is MASSIVE! You can access various parts of Ferelden and Orlais through the War Room, where you and three other members of the Inquisition plan your next move. There are dozens of side missions for your three advisors to carry out, though these aren’t interactive. Instead you assign one of them to carry out a task as you go run around Ferelden swinging your sword and then you come back to claim the rewards. The rewards are usually XP for more unlockable perks which comes in really handy. There are also a plethora of side missions that come from your party, items you pick up, relics, or even things you may stumble upon that will keep you busy for hours without even touching the main quest line. With access to only two areas, I still managed to wrangle 30 hours out of the first act and the second act is substantially meatier that that. You can imagine the kind of hours that went into this one.

No BioWare game would be complete without incredibly in-depth characters for you to interact with. With multiple party members to get to know as well as a handful of others to talk to around your home base, there’s a lot of story to dig into. Boasting more than 80,000 lines of dialogue in the game, there’s a lot of talking to be done as you get to know and sometimes woo the people who are watching your back on the battlefield. With some very moving cutscenes a real attachment is made with many of the characters that adds a little something extra to all the hours you’re sinking into Thedas. 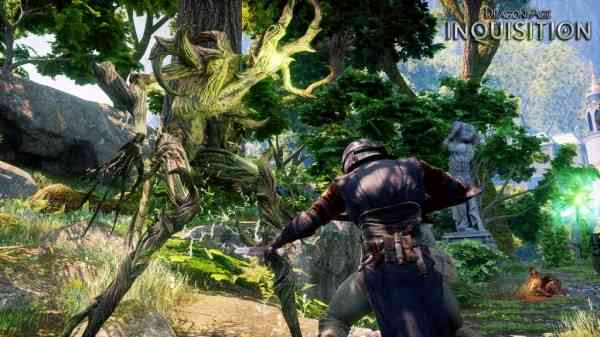 The music and the audio are a delight as well. The audio was crisp and clear and each area you played in had its own sound effects that heightened your gameplay. From bird calls to babbling brooks to crashing waves or the far off cries of dragons, there was always wonderful background noise to complement the beautiful visuals. The music as well was terrific. Perfectly paced and wonderfully scored, there was never a moment that I didn’t really enjoy the music massaging my ear drums.

Of course, no game is perfect. I found the levelling to be a grind right from the start. It’s a little too difficult to upgrade your character, especially when they’re throwing level 9 weapons at you right out of the gate. But don’t get too attached to that item because there isn’t a stash for you to use, so it will occupy a precious spot on your inventory for a very long time before you get to use it. I ended up selling a lot of very fine gear just because they were taking up too much room for too long. The controls are fine but they aren’t meant for finesse. So, those few times they want you to tightrope walk to get a chest or try to not fall off of a ledge that took you 10 minutes of climbing to get to can be extremely frustrating. There’s also a bit of an issue with your team’s AI because they love to just stand in your way and dumbly block the only exit of a room for an extended period of time. These are rather small issues, but they were enough to be noticed.

Now, sadly for this reviewer, a few technical hiccups prevented me from being able to join in on the dungeon diving multiplayer. The Day One patch will take care of any problems that were encountered, so an update on the multiplayer will come when we can get in on it.

Overall, Dragon Age: Inquisition is a great game that everyone should have in their collection. It’s one of the best bangs for your buck out there in terms of how much time you will clock in on this one and also in quality. Fun, addictive and life consuming, Inquisition is one of the best games I’ve sat down with in some time. It’s the perfect holiday gift for that special gamer in your life or, let’s be serious here, for you.

Next Assassin’s Creed: Rogue Review – Nothing Innovative But a Solid Addition to the Series
Previous Halo: The Master Chief Collection Review – A Definitive Collection Finally Worthy of its Price Tag