Disney Interactive recently made the announcement that they were forgoing the yearly installment of new Disney Infinity games in favor of providing more content to the existing package already released. I’d say that’s a smart move on Disney’s part as they’re already laying claim to being the number one toys-to-life game in the market. While I haven’t seen the numbers proving that, it comes as no surprise based on brand familiarity alone. The first release following through on the promise of new content is the Marvel Battlegrounds Playset. Using brand identity at its finest this brawler pits your Marvel heroes and villains against each other in four player combat.

The story mode included in the set is naught but an afterthought, but isn’t really the reason any fan would be picking up the playset anyway. It’ll run you around 30 minutes at best and then you’ll move on to what really matters. This is all about getting together with your friends and beating the holy hell out of each other with 3” plastic baubles in a great virtual setting. With fully interactive arenas based on the Marvel Universe you’ll be punching, zapping, shooting, electrocuting and Hulk smashing to your heart’s content. New characters launched are all amazing in their detail and incredibly fun to play. The early stand outs for me being Black Panther and Hulkbuster Iron Man.

“Marvel Battlegrounds is all about getting together with your friends and beating the holy hell out of each other with 3” plastic baubles in a great virtual setting.”

The truest test of any of the toys-to-life games is through the eyes of their target demographic. Gathering up all of my vinyl figurines (Rocket Racoon and Hulkbuster Iron Man, for the win) and my seven year old son, I geared up for a battle of epic proportions. In truth, I prepared to be a heartless jerk teaching my young son the valuable lesson of being gracious in defeat. Instead I was faced with embarrassing losses myself at the hands of a hooting and hollering child with a mad case of ‘Mash Buttonitis’. The lesson was still learned but I was the demonstrator.

The point this drove home is that Disney is doing exactly as it should with this franchise. I can see myself getting bored and moving on to something with a bit more meat but my son plugged away for the next four hours relentlessly swapping out one character after another. Utilizing some of the new moves, finishing attacks and even wake-up attacks really gave the playset some ground in feeling like an actual fighting game, albeit more amateur than it’s more grown up compatriots. Being able to use older 2.0 characters and see them have those extra attacks as well made me feel like I was truly getting my value out of money already spent long ago. 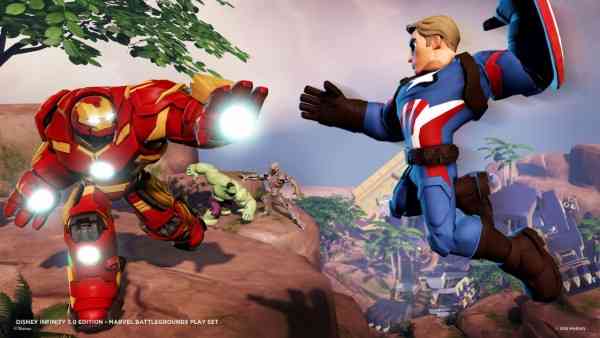 A neat feature, and also a great sell tactic, is the fact that playable trial characters rotate through the game on a weekly basis so players can try before they buy. This keeps people who have limited characters playing but also gets them thinking about adding their new favorites to their regular line-up.

There are a few different modes within the playset to keep people interested like Rumble and Hero of the Hill but in the long run this is much more fun with at least one extra friend and some quality versus combat. Being able to bank experience that you earn through game play and then spend it on any character you like to use outside of this particular playset is a neat addition as well. In the interest of keeping things balanced within the actual Marvel Battlegrounds playset, all characters are evenly powered up. Makes sense, and is an excellent way to still feel like you’re advancing the abilities of your roster.

“Marvel Battlegrounds is probably the best playset yet in terms of sheer fun and all out replayability. ‘Nuff said, true believers!”

One thing that stuck out as a sore spot for me was the complete and utter lack of an online multiplayer component but in the name of keeping things family friendly you can understand why this would be left out. I want to be able to leave my child to play alone without worrying about what he might hear on the other end of the speakers. If you want to play with others this is all about gathering your friends together in one place.

All in all this is a $20 set that is well worth its cost. The smart move of adding to Disney Infinity 3.0 rather than opting for 4.0 pays off and most players will feel like they’re getting their value’s worth out of not only the playset itself, but the characters they’ve already shelled out for. Marvel Battlegrounds is probably the best playset yet in terms of sheer fun and all out replayability. ‘Nuff said, true believers!

*** Playset provided by the publisher ** 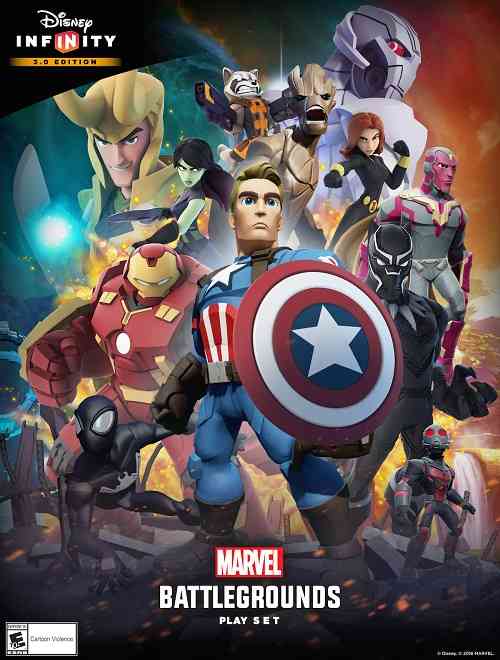 Leaks Suggest Marvel Skins Are Coming to Fortnite
Next The Last Dream: Developer’s Edition Review – A Point & Click Collision Between Dreams & Reality
Previous 101 Ways to Die Review – A Lot of Death, That Barely Comes to Life