Remaster seems to be one of those words that will make many people groan when mentioned these days, as a good portion of the time it’s usually a lazy port or an obvious cash grab. There are exceptions to the rule though, where it’s clear the developers took the time and care to make something worthy of the original or improving it enough to warrant the repurchase. There are a few titles that I personally don’t mind being re-released, as they were fantastic games in their own right when they originally came out. Darksiders II: Deathinitive Edition (very clever title in my opinion) is one of those games.

Full disclosure, I only very briefly played the Darksiders games. I knew they were good but they just got further and further behind in my backlog at the time, so I never got around to playing through them completely. That’s why I’m glad the Deathinitive Edition is releasing on current gen systems, for gamers like me that simply never got a chance to experience it all, and also for the super fans that want to do it again, albeit with a much prettier version.

“Darksiders is one of those games that on paper, probably shouldn’t have worked as well as it did.”

Darksiders is one of those games that on paper, probably shouldn’t have worked as well as it did. Its core mechanics was essentially a hybrid of Legend of Zelda and Soul Reaver/Prince of Persia. Usually when a game tries to marry completely different aspects and genres from others, it doesn’t always work out so well, but it did with Darksiders; really well in fact. The exploration was on par with an adventure Link may have had and the combat and traversal was just as good, if not better, than what Persian Prince had done before.

It even had a really interesting tale, telling the story of one of the Four Horsemen, War, who essentially killed off humanity. Darksiders II tells the tale in tandem but instead focuses on his brother Death, who is on a mission to prove War’s innocence and set things right. If you’ve not played Darksiders II before, or completed it previously like myself, now’s the time. 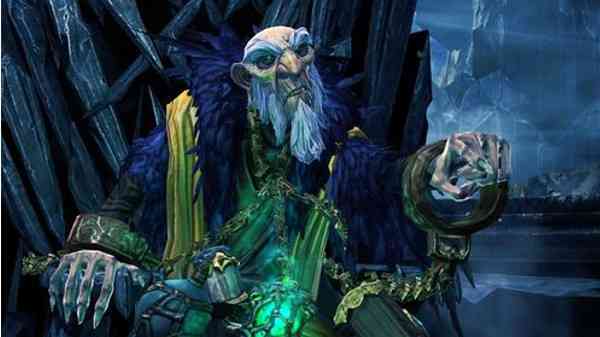 Voiced brilliantly by Michael Wincott, you play as Death, one of the Four Horsemen. Death is sure that his brother is innocent and sets out to prove so, though it won’t be a simple task by any stretch. He begins his journey seeking the Crowfather, also known as The Keeper of Secrets. When he finds him, Crowfather refuses to let Death pass to where he needs to go and attacks. Death makes quick work of this new foe and is knocked out, only to awaken in some strange land he knows nothing of. The remaining story is quite interesting, but because the game itself is so long now with the DLC embedded into the experience, it can feel a little lengthy. Left with a cliffhanger, the ending isn’t quite satisfying, especially since we don’t know if we’re going to get a third game.

The core gameplay is much like other hack and slash action adventures, and being that Darksiders II was one of the best games last generation, it was an improvement over the original and constantly rotated between combat, exploration, and puzzle solving. The puzzles are generally never too difficult, as a keen eye will always spot the ledge to hop up to or the lever to pull to progress, but some will take trial and error as you figure out the correct method in unlocking a specific door or area.

“Much like its Zelda roots, Death will traverse across vast open overworld areas that can be explored by foot or on his trusty horse Despair.”

Much like its Zelda roots, Death will traverse across vast open overworld areas that can be explored by foot or on his trusty horse Despair. While you can simply follow the quest marker to your next objective, there are many side areas that will need to be explored if you want to find all of the treasure chests, collectables, and quest items for the numerous side quests during your adventure. Better yet, a fast travel system is also included allowing you to teleport to specific areas instantly; incredibly handy after you complete a dungeon or want to go quickly buy and sell items.

In dungeons the level design is fantastic as it’s always easy to navigate and you don’t get terribly lost due to the progression within as it’s in ‘steps’ for the most part. If by chance you ever do get confused or lost you can simply ask Dust, your pet raven that follows you around to give you hints which I’ve used numerous times. Jumping, wall running, swinging, climbing, and more, all feel fluid when you combo them together, as it looks effortless for Death. There are many ledges and areas that you ‘should’ be able to get to quite easily with a jump or two, but you are unable as you need to follow the specific puzzle path laid out before you.

While most puzzles simply have you pulling a lever to open a door to get to another slightly more complicated puzzle (to open another door), they vary in types and setting, so it never becomes too stale at any given point. While it may become predictable which rooms will house an onslaught of enemies or a boss, combat requires more than simple button mashing to be effective. 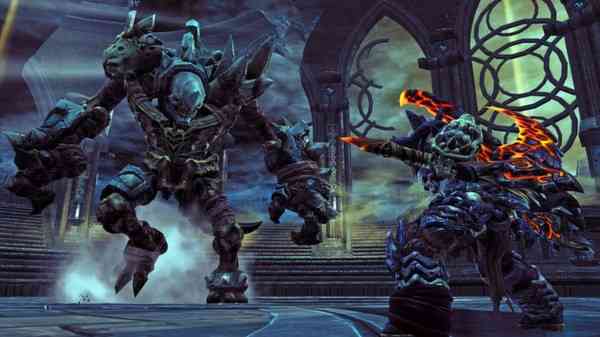 To complete the checklist of game mechanics, there’s also a leveling and loot system that you’d find in many other RPG games. Killing enemies, completing dungeons, and quests will net you experience which then gives you skill points to use for new combat moves. You’ll also find a slew of treasure chests that will net you a good amount of loot that ranges from weapons, to armor, to other powerful items. Given that the DLC is included and embedded into the game, you’ll come across a significant upgrade every now and then that can make Death feel much more powerful.

You’ll also gather gold from enemies which can then be spent on special combat moves or new weapons and armor from different vendors. If you’re lucky, you’ll come across special ‘possessed’ weapons that start out with average damage and stats, but these unique items can be ‘fed’ your unneeded items to increase its level, making it grow vastly in power. Death’s main weapon of choice are his two scythes. Quick and powerful, these will be your main go-to for combat, though you do have a choice of a secondary as well that ranges from massive and slow weapons that deal huge damage, to quicker but weaker gauntlet-like weapons, allowing for customization based on your play style.

“Knowing when to use your special abilities and Reaper form will weigh heavily on life or…death.”

You’ll notice there are numerous meters in the upper corner. These are to indicate your health, wrath (mana), and reaper resources at any given time. Wrath is needed to use your special heavy damaging abilities and Death can use his Reaper ability when full, transforming into his Grim Reaper form dealing much more damage for a short amount of time. Knowing when to use your special abilities and Reaper form will weigh heavily on life or…death.

So what’s new in this Deathinitive Edition you ask? For starters, all of the individual DLC that was released for the game is now included: The Maker Armor Set, The Demon Lord Belial , The Abyssal Forge, Death Rides, Angel of Death, Mace Maximus, Deadly Despair, Shadow of Death, Mortis Pack, Rusanov’s Axe, Van Der Schmash Hammer, Fletcher’s Crow Hammer, and Argul’s Tomb.

“Speaking of graphical improvements, the game now runs natively in 1080p, and while no doubt an improvement over the original release, it’s simply a slightly prettier and sharper version.”

The original complaints about the DLC was that it felt separate from the main game itself, so to remedy this, the it is now integrated and worked into the natural progression which is a very clever way to do it rather than just dumping you with all of the items and areas from the get-go. The game’s balancing and loot dispersal was also reworked, along with the obvious graphical upgrades. Speaking of graphical improvements, the game now runs natively in 1080p, and while no doubt an improvement over the original release, it’s simply a slightly prettier and sharper version.

While I had no issues for the most part, there were times of slight framerate stutter and random audio drop outs. Every few bosses, once defeated, I simply lost all audio for no reason, only for it to come back a few seconds later. It happened a handful of times so it needed to be mentioned.

While Darksiders II may be very reminiscent of the original game, it does offer more variety in its environments but vastly improves on its audio, with a fitting orchestral soundtrack and fantastic voice acting all around. Darksiders II: Deathinitive Edition may have a silly name, but the game itself is great. Some may see its blend of mechanics as a ‘jack of all trades, master of none’, but it does each very well and they simply all work together.

If you’ve played Darksiders II before, you know exactly what you’re getting into, which you’re most likely excited to do so again. If you missed it previously, don’t make the same mistake this time around. If it had been bundled with the original game it would have been the ultimate package (though they would have had to come up with another play on words for the title) to catch up on the series. Given the lower price point it’s still a solid purchase, just know it’s a slightly better version of its original release, and that’s not a bad thing at all. 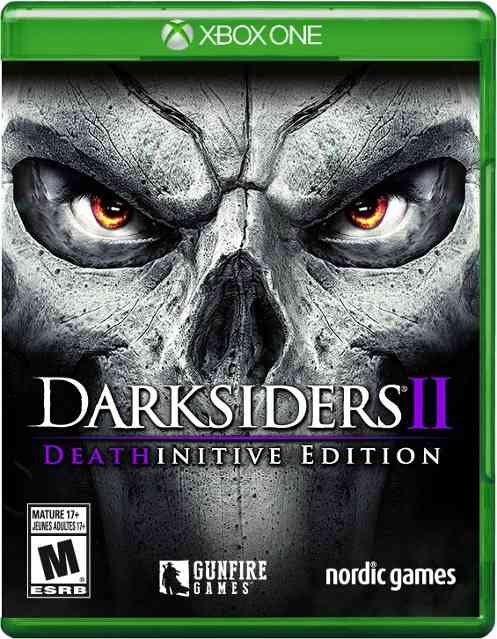