A couple of years ago, I spent some time with Crysis 2 on the Xbox 360 and there is no doubt I certainly enjoyed my experiences with the game.  It was a stunner in the visuals department and by and large a smooth shooter experience that featured a multiplayer component which far exceeded my expectations.  Yet for some reason or another that “wow factor” was not there for me.  I found Crysis 2 quickly fell off my radar and eventually took a back seat to other ‘Triple-A’ shooters already available on the 360.  Fast forward to the present and Crytek’s Crysis 3 arrives as one of the biggest games released so far this year.  Much like my time spent with the previous installment in the Crysis franchise, I cannot help but feel like something is missing and that Crysis 3 could have been so much better.

As far as the single player story is concerned, Crysis 3 picks up 25 years after the events in Crysis 2.  New York City has been encased by a gigantic “Liberty Dome” where nothing remains but an urban rainforest with overgrown trees, swamplands, rivers and lots of weeds in the midst of what used to be a vibrant city. The CELL Corporation has taken over the nation and the minds of its inhabitants. The games main protagonist, The Prophet, has visions of the planet’s imminent destruction.  So with the help of another character, Psycho, they embark on a journey, navigating their way across the dangerous lands of the “Liberty Dome” and stopping at nothing to ensure the Prophet’s visions do not come true.  Of course, there is much more to it than that and there are many twists and turns along the way, but that is the games storyline in a nutshell.  Overall, the storyline is not bad. It has a ‘been there, done that’ feeling to it. However, I did find the characters mildly interesting and the story did enough to push the single player along at a decent pace; and ultimately provides a nice backdrop to the real enjoyment of the game, which is using your new weaponry and the Nanosuit’s various capabilities to their fullest and taking down enemies in a variety of ways. 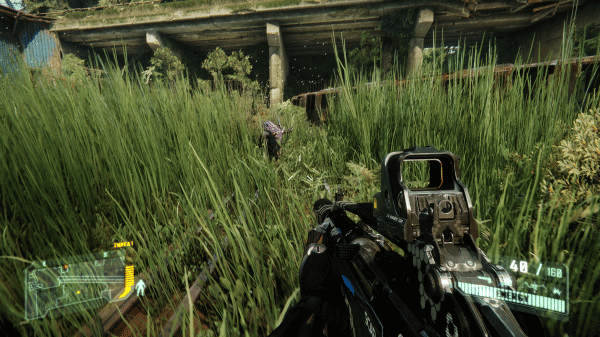 Crysis 3 feels like it is part sandbox, but do not kid yourself as it mostly a linear experience. It remains a shooter but certainly does not play out like your typical first person shooter, which is often a strictly linear affair as you progress from point A to point B.  There is a sense of freedom and openness with every level and there are many ways you can get to your next objective.  This being said, I found there was way too much emphasis on stealth gameplay.  While this aspect of the game is enjoyable, there are just to many occasions where I want to kick down a door, use the Nanosuit to its fullest and scream through levels taking down CELL operatives and other aliens one after the next.  The run and gun approach will work in some instances but will lead to your ultimate demise more often than not as the AI has a remarkable ability to track your down if you do not cloak your suit.  This aspect of the game was frustrating and speaks to some of the issues I had with the games AI.

Crysis 3’s single player experience is not as ‘beefy’ as it was last time around.  Last time, I spent easily over 10-hours polishing off the campaign.  This time around you could probably complete the single player in a couple of sittings or about 6-hours to be more precise.  The length of the single player is a let down but there is some replayability factors at play when you take into consideration there are collectibles, various Nanosuit upgrades, lots of slick weapons and many ways you can proceed through the games various battle zones.

Aside from the way Crysis 3 almost forces you into stealth mode combat the majority of the time, the game also wants you to use the new crossbow and use it a lot.  As far as crossbows go, the ‘Predator Bow’ is badass.  It is silky smooth and easy to use.  It has various types of arrows to use and it is deadly accurate.  I just wish that it was not essentially my default weapon. I just felt like the game was putting me in positions where using the bow was the only suitable option. Don’t get me wrong, I liked using it, but not as often as the game wanted me to. 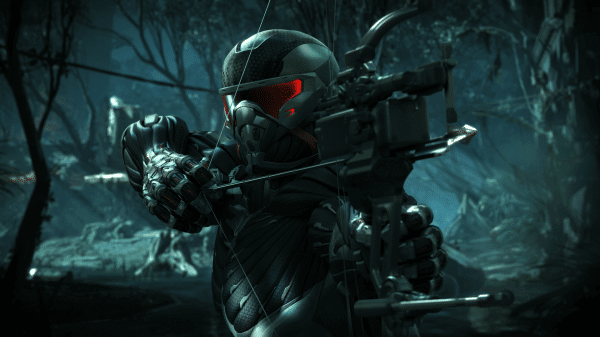 The controls in the game are tight and easy to pick up. Anyone who has played a shooter before will have no problems picking up the controls.  There is also a very comprehensive tutorial you can jump into that shows you the ‘ins and outs’ of your Nanosuit, the controls, the tactical display, the visor, hacking, and virtually anything that helps you on your journey.  I found the tutorial fantastic and well worth the five or ten minutes you will spend in it.

The enemy AI on the other hand is not quite as tight or refined as the controls.  I found the enemies were simply not as smart or responsive as they could be.  Far too often in the midst of a chaotic gun battle, the CELL enemy would have no clue where I was once I would hit the cloak button.  Likewise, I found it far too easy to walk up and stealth kill all those clueless enemies who always somehow managed to face the opposite direction.  Granted, the AI is much better compared to Crysis 2’s enemies, but compared to other shooters on the market I expected a bit more in this regard.

Visually, Crysis 3 is about as good as it gets. This comes as no surprise as anyone who has been following this game since it’s release knows it is a pretty game. Everything from the game’s recreation of an urban NYC jungle to the various character and enemy designs really shines. Crysis 3 is a densely rich shooter where no detail is overlooked.  The cut scenes are sharp looking and nothing is lost from the transition from cut-scene to in-game play.  The lighting effects are equally stunning. The natural dappled lighting provides the perfect atmosphere, not to mention some very memorable moments. 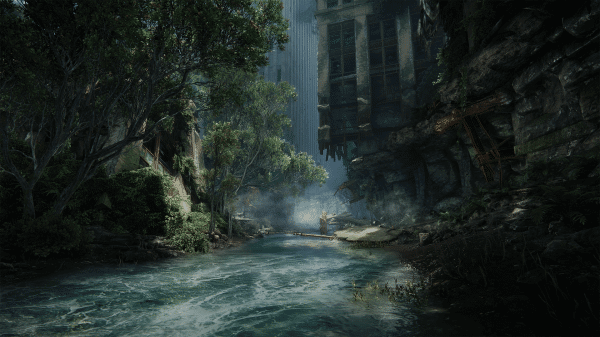 Unlike the games graphics, I was a little disappointed with the games sound.  What bothered me the most was the occasions where the sound would cut in and out.  At one point during the second mission, it was so bad I had to turn the game off in the hopes a reboot would fix the issue, but alas the sound issues kept reoccurring.  After a little online research I discovered this was happening to others and several people recommended installing the game to your hard drive.  Regardless, I feel you should not have to do this and I  hope a patch will come along soon to fix the issue.  As far as the rest of the sound is concerned, Crysis 3 delivers.  The game features a compelling musical soundtrack, clear voice work and booming sound effects.  All in all, the games sound is good but those technical glitches really dampened the audio experience for me.

As far as the multiplayer aspects of the game are concerned, Crysis 3 is quite enjoyable.  Sure it is not as refined as say Modern Warfare 3, but on its own it is a damn fine multiplayer game.  Out of the box you get 12 multiplayer maps and 8 modes.  All the maps have their own unique designs that are based on areas you experienced in the single player campaign. There is an XP system and you can customize your characters and weaponry. Your typical free-for-all and team deathmatches, which are staples for any shooter, are present. There is also a Capture the Flag mode. What makes Crysis 3 multiplayer stand out from the rest is some of the unique modes.  Crash Site, for instance, is a team based mode with a crash site where a Ceph drop pod has dropped. Teams fight to protect their pod and gain points the longer it is protected. The site moves throughout the match much like the King of the Hill mode in Halo.  Likewise, Hunter is a unique viral based mode where you have teams of two hunters armed with bows and infinite stealth energy.  Your goal is to eliminate CELL Operatives who crash landed in the level.  Overall, the multiplayer component is fast paced and addictive as the upgrades and game types will have you coming back for more and more.

The Crysis franchise has always been known for its visually stunning games and Crysis 3 is no exception.  It is indeed the kind of game you will use to showcase how good a shooter can look on the Xbox 360.  Unfortunately, underneath those slick looking graphics is a shooter that is unquestionably good, but could have been so much better.  In a market saturated with shooters, it takes something special to rise above the pack. Crysis 3 was on the cusp of doing so, but in the end it didn’t quite knock one out of the park.