Beat the Game Review – Lost in a Tiny Techno Wasteland

Music games tend to be limited in their depth. A great deal of the focus ends up spent on mechanical systems and audio engineering, leaving little room for worlds to explore or narratives to develop. While this isn’t a universal problem among the genre, exceptions tend to be rare. Beat The Game, a tiny title from indie developer Worm Animation set in a surreal techno wasteland aims to fix this issue. Whether or not they succeeded, the game still represents a significant departure from the usual musical title.

Beat The Game tasks you with guiding a lanky wanderer through a sandy expanse littered with refuse. Armed only with a recording device and a powerful sense of curiosity, you must comb the landscape for fresh new sounds. Ultimately your goal is to perform a concert for the local residents using only the sounds you’ve collected throughout the game. There isn’t a ton of direct exposition on display here, with the exception of a few sparse cutscenes.

While this is most assuredly a music-focused experience, the graphics deserve some attention as well. The developers were inspired by the works of Salvador Dali, and it shows. Abstract shapes glide lazily through the sky, geometric constructions make up your audience and stranger creations are visible in the distance. The color palette in both the day and the night segments perfectly captures a lonely desert almost swallowed by the sky. The character models are all full of life while staying relatively grounded, at least compared to the environment. Solving each segment of the larger puzzle means another brief cutscene. These interludes are made more lively by the protagonist’s cartoonish, exaggerated mannerisms. Everything he does is just a little drawn out, a little bit performative. His behavior lends life and wonder to every scene.

“The developers were inspired by the works of Salvador Dali, and it shows.”

Your enjoyment of Beat The Game is tied to your opinion on French house music. If Marc Houle doesn’t appeal to you, this game is going to be rather unpleasant. I had never even heard of him before playing this game. To my surprise (and delight!), his work resonates with me. My time with this music was peppered with a sort of sinister nostalgia. There’s a longing for a different time, but no clear idea of which time you’re thinking about. Beyond my obvious bias, the soundtrack blends beautifully with the visuals. Songs take on a more lonely, surreal and otherworldly vibe when paired with this vast desert. The saturated colors bring out extra depth from every track. The best part about the soundtrack is that you’re the one arranging it. You have access to your mixer throughout your search. Every sound you find means another change you can make to what you’re hearing. If you get tired of whatever simple loop you’ve crafted, you just have to compose another one. 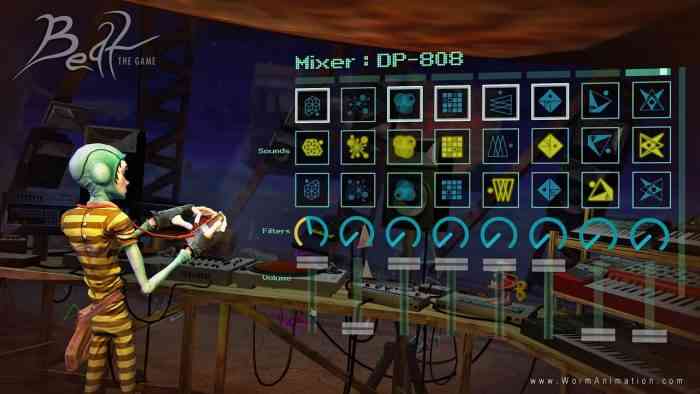 Mixing sounds is a free-form and experimental process. Except when you’re holding the concert, then the entire experience is funneled into a single correct set of actions. If you fall behind or ignore the prompts, you fail. While the consequences of failure aren’t anything too dire, it still stings to have that freedom taken from you just when it would be the most useful and meaningful. The rest of the game’s puzzles manage to be esoteric without getting frustrating. Actually blending sounds into songs is an intuitive process, one limited only by the amount of sounds you have access to. You can adjust things like volume and pitch as well as sound composition, though I had less luck with these aspects of the process. Moving around the map is mostly seamless, though the movement controls would occasionally give me trouble.

“It’s just somewhat obvious that this was meant to be a longer game.”

Unfortunately, the entire experience is overshadowed by the game’s length. Unless something changes post-release, Beat The Game can be wrapped up in an hour or so. This isn’t a deal-breaker in itself. Games aren’t bound by any regulations on length, personal preferences aside. It’s just somewhat obvious that this was meant to be a longer game. The scene following the live show has you hopping in a purple-headed dune buggy towards your next destination. After that, you get.. credits? There are characters like Moss who are introduced once and never shown again. The instructions state you’ll be meeting people after every show who will carry you forward. Yet, there’s just the one show you perform. As a self-contained entity, this game is terrific. What I played, however, was the first chapter in a story that’s currently without an ending. What I played was engrossing. I want more. It doesn’t look like there’s more to be played, at least not presently.

If you’ve got an ear for French house music and an eye for Salvador Dali, this game will be a sumptuous feast. The soundtrack and the scenery weave together to create an experience greater than either separate element could offer. What you see and hear has the power to pull you in, to get you hooked almost immediately. But be warned: this game is crazy short. If you loved it, you’ll just want more. Not just more Marc Houle, or more Dali-esque visuals, but more game to beat. If you’re looking for an unusual musical game and you can rectify this title’s unsatisfying length, you’ll find something to love in Beat The Game. 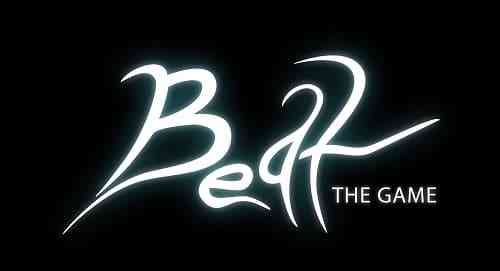