I was happy to hear that Apotheon would be one of the free games this month for PS+ subscribers. Winning me over with the use of Greek mythology and an interesting art style, I was eager to check it out and see if it lived up to the trailer. While there were a few things that threw me off or dissatisfied me, overall it was a fun experience that took me longer to beat than I anticipated.

The best things about Apotheon were the story, world, and artwork. I’m a sucker for ancient mythologies, and the way everything has been wrapped up in an art style similar to that of old Greek vases and pottery was refreshing. The story begins in ancient Greece, with Zeus cutting off contact between humans and the gods. You play Nikandrios, an average soldier from a town under attack who steps up to fight for his people. Seeing as the game is very Metroidvania-esque, expect Nikandrios to grow stronger and acquire more powerful equipment to climb Mount Olympus and eventually go toe-to-toe with Zeus. While the over-arching story isn’t that original in itself, it has some neat twists and shows off a great interpretation of Greek mythology that fans will enjoy. 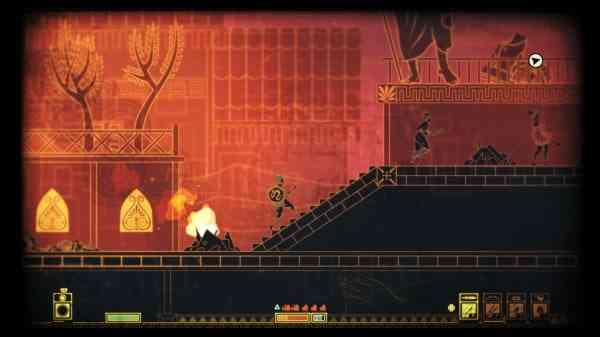 “Fighting gods is no easy feat, and to do so you’ll find yourself scavenging weapons and gold.”

With the help of Hera, Nikandrios must collect the artifacts of the gods to bring peace and harmony to the natural elements. Some gods will give these up without a fight, but they will all force you to progress through trials of some sort in each of their realms first. Fighting gods is no easy feat, and to do so you’ll find yourself scavenging weapons and gold. All weapons have durability, and can only make contact with enemies or the environment so many times before breaking. Luckily there tends to be a heavy helping of equipment lying about, but you can certainly find yourself in some sticky situations if you’re not careful.

My main problem with having item durability is that it causes me to turn into a pack rat and horde everything better than my starting gear. With Apotheon, they’ve not only done a good job of giving you a lot to work with but you can also spend your hard-earned gold at the Blackmarket Merchant to buy any rare weapons you may want to use again. There are many other merchants as well, allowing you to purchase normal weapons as well as upgrade your proficiency with them or acquire new armour. 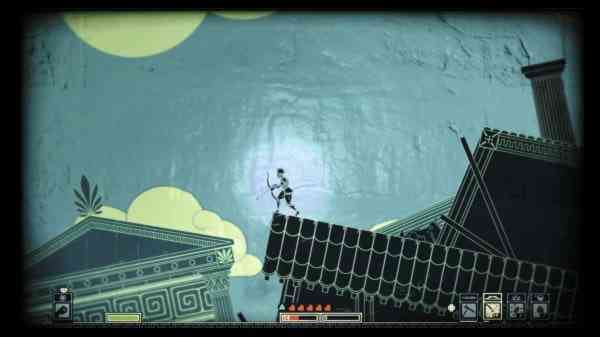 “Alientrap has done a good job with the world design… it’s rare that you’re ever truly stuck.”

It wouldn’t feel like a Metroidvania game if there wasn’t any exploration or hidden areas, and Apotheon has plenty of both. Perceptive players will be able to save their gold for weapon training by hunting down these areas to acquire new armour, powerful weapons, or other helpful items. There is a lot of reward for revealing the map in general, and sometimes you have to if you want to heal up before the next boss fight. Alientrap has done a good job with the world design, and you can complete your tasks non-sequentially. It’s rare that you’re ever truly stuck.

While the experience was pretty decent over all, there were some issues that made it lose major points. For instance, I crashed over five times while playing. Luckily the auto-save system is decent, but it’s frustrating when you clear a trial revolving around deadly traps and the game has to reboot. Aside from that, I think the combat needs just a bit more tuning. It’s not bad and when it feels good it feels really good, but sometimes when things get hectic it turns into a game of running away while hurling spears from behind my shield. You can increase the difficulty at any time, but I didn’t really feel like it would have made the game more challenging; I’d just have ended up chugging more health potions and using my ultimate strategy more frequently. 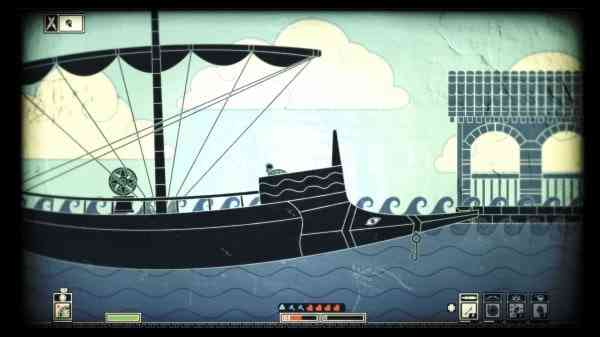 “Nikandrios is fun to run around and fight enemies with. Coupling this with a great soundtrack and clever art style sells the whole experience…”

I think what really made me want to come back after every crash or death was the atmosphere that the developers have created here. Part of the reason God of War was so good is because it feels badass to kill a god and become the ultimate Greek warrior. While the character isn’t anywhere near as fleshed out or interesting, Nikandrios is still fun to run around and fight enemies with. Coupling this with a great soundtrack and clever art style sells the whole experience in a new light that was a lot of fun to play through.

One of the key factors to my enjoyment of the game remains that Apotheon was free. If the crashes and bugs aren’t fixed by the end of the month when this becomes purchase only, I’d be pretty disappointed as a paying customer. For those of you with PS+, pick it up and maybe wait a few more weeks to play it. If you don’t really mind some bugs or just really like what you see, you may as well pick it up now. It was fun, especially if you enjoy Metroidvania style games or Greek mythology. I’m excited to see more from Alientrap in the future. With previous titles Nexuiz and Capsized, they’ve already got a strong track record established for the independent market. In the meantime, I’ll get back to unlocking all the secrets of Olympus.

Next Total War: Attila Review – In Time of Peace, Prepare for War
Previous Grow Home Review – Ubisoft’s Own ‘Wall-E and the Beanstalk’