With a forced blend of single player action and multiplayer carnage, Sega and Platinum Games give us their arena brawler Anarchy Reigns. Undoubtedly the focus of this title is the 16 player absolute chaos that is the multiplayer, but the game forces you to slog through one of the most uninspired single player campaigns I’ve ever come across in order to unlock items, skills and characters that you’ll need to reign supreme in the arena. While the audience that Anarchy Reigns is trying to reach is surely a broad one, the number of gamers who will actually latch on to and continue to play the game is surely a small one. High skill and extreme patience are two qualities needed to succeed here.

As already mentioned, the real focus of Anarchy Reigns is its multiplayer, but in order to get a feel for the game I jumped into the tutorial and single player first. Control wise you’ve got a fairly even learning curve. You can hop in with the basics and have a bit of fun, but to truly succeed you’ll have to master some high level controls that will have all but the best of the best running for cover. Not only will you have to master your fighter, you’ll also have to fight both the camera and the lock-on system that prove to be quite frustrating. The saving grace of this is the fact that all 16 characters control exactly the same while offering completely different fighting styles, combos and special weapons. For some this might be a hindrance to the gameplay, but from the point of view of someone who has never been able to remember special combos in any fighting game he’s ever played, it’s a welcome take on the genre. Jumping into the single player campaign you have the choice of two characters to control, Jack or Leo, with each campaign working out to be a fairly similar experience. Both characters are tracking down the same guy, Max, albeit Leo wants to rescue him and Jack wants to claim a bounty on him. You’ll be thrown into large open environments where you’ll have the pleasure of mindlessly beating on waves of enemies until you unlock missions. You can unlock goal type missions which, for the most part, put you in the same boring scenario of mindlessly beating waves of even more boring enemies to increase your score or story driven missions to advance the campaign further. The story missions are where you’ll face off against other characters in the game so you can unlock them for multiplayer carnage. You’ll be treated to a profanity laced vignette between the two combatants with generous helpings of potty level humour that ultimately tends to come off as awkward and overdone. I would compare them as something akin to a train wreck… you want to look away but you just can’t. This repetitive style of gameplay quickly grew tired for me and what should have been an enjoyable experience turned into a lengthy and force fed (read: NECESSARY) push to completion.

The real experience of Anarchy Reigns certainly lands within its multiplayer arena. You’re treated to various modes from the standards like the 16 player Battle Royale slaughter fest to some more ambitious modes like Deathball – a bastardized take on football that is surprisingly fun. In fact, I never won a single match in Deathball, but kept returning to it over every other multiplayer offering nonetheless. Keeping you on your toes in the multiplayer arenas, you’re treated to a changing environment and random monsters or scenarios that make surviving a real chore. Getting pummeled by the Kraken or seared by a giant laser wielding robot adds merit to the title where anarchy does indeed reign over everything. Any gamers who want to truly survive the multiplayer best brush up on their technique because if not, you will be nothing more than fodder for the more skilled players. I was mercilessly beat upon round after round before I started to grasp the control scheme a little better.

Anarchy Reigns, when looking at the graphics department, looks OK, but hardly breaks the barrier of amazing. I admire the development team’s attempt at being stylish but the sheer lack of polish hurts the overall quality. Backgrounds seemed muddled, drowned out and at times quite colourless. Characters, while looking good standing still due to some cool design, came across as messy when in movement. When things got especially chaotic with lots of bodies and explosions rocking the battle field, I noticed some pretty severe frame rate drops too.  Anytime something like that happens you’ll inevitably be pulled out of the action, which for me can really ruin a game. Considering that at its core this is a glorified fighting game, I’d say those kind of issues are inexcusable and something that should have been worked out during testing. As most people have come to expect from a game in this vein, the voice work is a bit over the top and at times downright awful. Giving that a pass, I can say that there’s nothing mind blowing that Anarchy Reigns brings to the table in terms of sound. Sure, every ass-whooping punch is greeted with a blow absorbing thud as it should be, but it hardly stands out as noticeable.  The score that accompanies it is equally as lackluster, being that you’ll have to really concentrate at it if you care to notice it. As a whole you’ll find the sound completely unmemorable, but at the very least still serviceable.

All in all, Anarchy Reigns doesn’t bring a lot to the table. It will undoubtedly appeal to a very small audience who will sing its praises, but the large majority of gamers will hardly give this more than a passing glance and likely even less of their time. The uninspired and repetitive single player campaign is tedious, and while the game’s intention all along is to shine in the multiplayer offering, even that lacks the staying power to keep most gamers twitching their fingers. Taking into consideration that this is a $30 title, it’s passable considering what it offers, but utterly forgettable in every other respect. 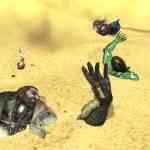 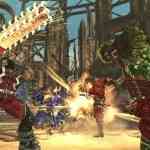 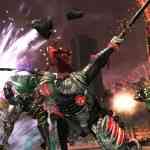 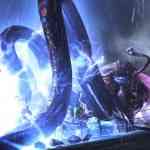 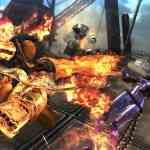 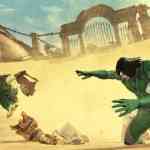 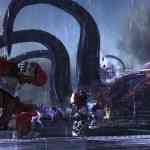 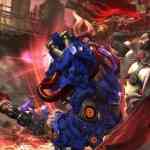 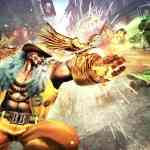