If you’ve tuned in on world news at least once in the recent months, then you’ll be well aware the gun control debate in the United States has reached a fever pitch. The American Dream, a dark satirical look at gun culture from developer Samurai Punk, cannot come at a more appropriate time – if only it has something interesting to say. The American Dream works well as both a sharp comedy and a VR shooting gallery, but its political message is so simple and poorly delivered that all significance is lost by the end credits.

Set during a 1950s world’s fair, The American Dream takes the guise of an amusement park ride showcasing a future America that has fully embraced firearms. Underneath the bright vintage aesthetics and charming cardboard cut-outs hides a hilariously grim world where pistols act as eating utensils, hedges are trimmed with machine gun sprays, and shotgun weddings involve actual shotguns. Through a tour of twenty stages of the average American’s life, from birth to marriage, you are shown how guns can be used in each occasion to solve problems and enhance living standards. Like the Fallout series with its take on nuclear power, The American Dream unflinchingly commits to this absurd vision of a gun-filled dystopia, and the results are original and highly amusing – at least initially.

Each level is essentially a minigame, tasking you with shooting stuff up in a steady stream of wacky settings. In one, you flip burger patties at a fast food joint, and in another, you shoot holes into donuts at a factory. There’s a wide variety in the scenarios presented, and they go a long in building the world of The American Dream and in keeping things entertaining. The prom night sequence is a particularly inspired moment, in which you must impress your date with your dance moves by waving around two pistols.

“The American Dream runs out of steam towards the end, and the later levels reflect that.”

However, for every section that works, there is one that does not. The American Dream runs out of steam towards the end, and the later levels reflect that. A prime example is the final boss, where The American Dream abruptly goes full-on Doom, giving you assault rifles and a hulking monster to cut down. Not only is this battle wildly out of place, it also fails to advance the narrative or add substance to the overarching theme. It’s a boss fight for the sake of having a boss fight.

Since the gameplay boils down to firing your guns at specific objects before moving on, be it patties or donuts, repetition doesn’t take long to kick in. There’s no opportunity for player choice or creativity; you can only resolve each section in the way the developers intend. Such an on-the-rails experience is suitable for shorter titles, but grows tiresome over the four hour length of The American Dream. The jokes about gun culture also start to wear thin, and I found myself laughing less and less as I proceeded through the levels. 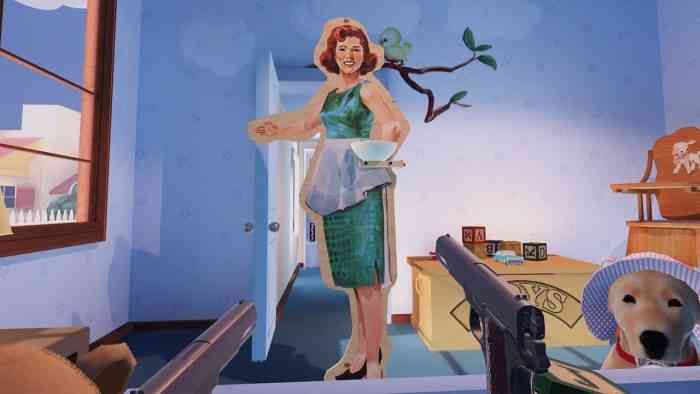 This would all be excusable if The American Dream has interesting ideas to convey, but it doesn’t. From the very first minutes, you are beat over the head again and again with the same message: guns and capitalism are bad. You are never given compelling reasons as to why – they just are. As if to make sure you don’t forget, this point is later driven home by a whopping five minute monologue (it feels much, much longer). The American Dream misses the opportunity to expand upon this message and evolve it into something profound. In the end, it’s more of a simple, albeit important, premise rather than a thought-provoking argument.

Ironically, The American Dream’s political aspiration is both its selling point and its downfall. It doesn’t say anything beyond what you can already discern from the game’s trailers, but there’s still plenty of fun and laughs to be had in this offbeat depiction of America. Though not entirely successful in its attempt, The American Dream is still worth of being experienced for its boldness in using VR technology to address real-world issues. 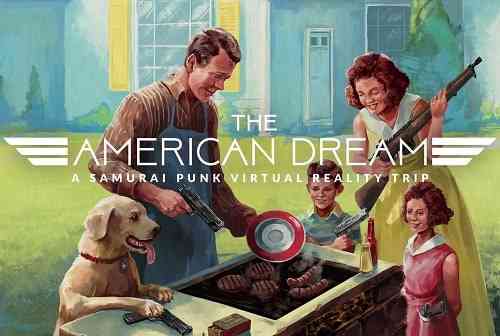 Warhammer Age of Sigmar: Tempestfall VR Review – Tempestfall Stuck In A Teapot?
Next Fable Fortune Review – Dealing Fable A New Hand
Previous Burnout Paradise Remastered Review – Where The Grass is Green and The Girls Are Pretty