Age of Wonders 3: Golden Realms (PC) Review – The Halflings are Stronger Than You Think

There are a lot of ways to kill an afternoon, but playing Age of Wonders should be closer to the top of the list. Now that the new expansion is out, players can finally root for the ultimate underdog, the Halflings, as they are sent into battle with chickens, brew, and plenty of ponies. I personally had a blast creating an empire, sending my heroes against seemingly more powerful enemies, and testing the mettle of these short but cunning warriors, all in the name of the mighty Ham Binger. It would seem that Triumph wanted to charm their audience this time around with an ale instead of impressing us with a sword, and I think they’ve definitely succeeded.

What you can expect with the Golden Realms is your standard upgrade for a strategy game: new playable Race, more maps, and another campaign. The twist is that your new race is the Halflings, and it’s going to take some hard work to make them viable. However, with a bit of patience and strategy, these little guys pack a fierce punch that can take down any opponent, especially once you’ve mastered the Luck mechanic. Halflings all have an extra chance to avoid damage based on their morale, and you can boost this by making them lucky more than once using cloverfields you’ll find sprinkled about the map. This gives them a huge advantage, and allows a lot of your troops to walk away from combat unscathed. 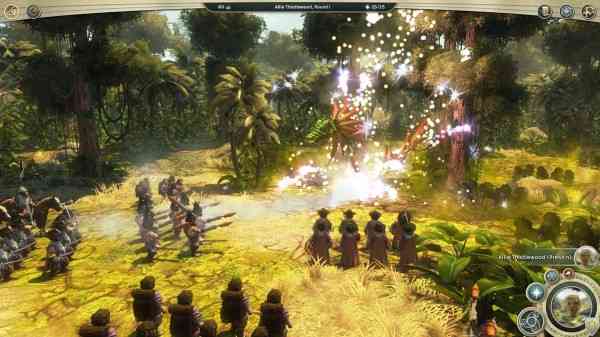 The new units seem innocent enough with jesters and apprentices fighting dung-throwing primates, but this is a playful yet proud race and you’ll soon find yourself in control of monster-hunting parties, manticore riders, and eagle fliers ready and willing to hunt down your enemies. Overall, I felt like this was a nice change of pace from the other races and allowed for a more whimsical army. I just couldn’t shake a sense of glee as I swept the field with lucky Halflings, dishing out damage and avoiding it all costs. I did feel like a couple of the units could have been altered slightly to make the early game just a little bit more effective, but for the most part the army seems quite well-balanced.

I think that one of my only gripes with the series and expansion on a whole is the combat system itself. I’m sure this is just my own lack of experience, but I can’t seem to catch a break when I go in and fight manually. Almost all of my combat tends to be simulated because whenever I sim, I win. When I fight, I lose at least a couple of my troops and this really slows down my exploration and expansion in comparison. To be fair, Golden Realms clearly states that it’s for experienced players, and I would hardly call myself as such. I’m sure a veteran player will have no trouble gathering a Halfling patrol and wrecking everything that stands in their way. 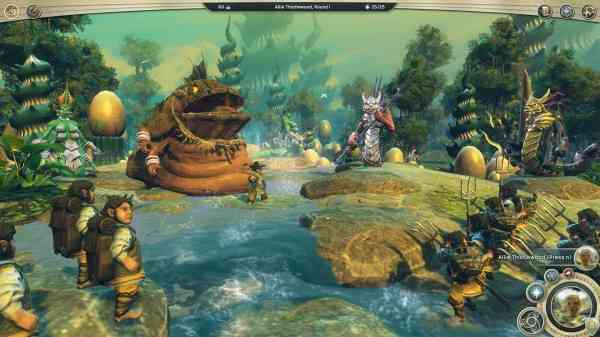 That being said, there are new monsters in the expansion as well. Triumph packs a lot into this pint-sized package, including new Hero items, map locations, and a couple unique scenarios. When debating whether or not I want the latest DLC or expansion for a game I’m playing, the biggest selling point for me is how many hours of fun gameplay it adds to the mix, and Golden Realms delivers. Not only is there a very sizeable amount of new content, but it’s cheap! GR is only twelve dollars, and that’s just astounding to me when your average Civilization expansion is thirty. I mean really, what more could you ask for?

At the end of the day this is just a very solid purchase if you’re looking for quality content at a low price that offers nearly endless hours of fun gameplay centered around an oft-forgotten race so key to true fantasy worlds. Thank you Triumph, for doing justice to these noble little people and bringing them to the center stage for a grand performance of dancing, singing, and a little bit of blood-letting. Let the games begin!