We. The Revolution: Can You Hear the People Sing at PAX West 2018

We. The Revolution PAX West 2018 Preview

It’s 1794, and you’re a judge bent on delivering justice to the people of Paris. In We. The Revolution, The people aren’t having it. You must balance the revolutionary factions—the Girondins headed by Danton, the Jacobins by Robespierre—along with the mobs of commoners, the remaining aristocrats, and your own family. It’s tough work, being an impartial judge, especially when your own life hangs in the balance. It’s even tough work to be a partial judge when there are so many factions to side with.

Polish developer Polyslash and publisher Klabater have brought strategy to the French Revolution, putting its players in the unenviable position of a humble judge brought into power through the tumult of the dangerous times. You preside as him over a series of randomized cases over a period of a month, where you must decide the fates of the various citizens that cross your path. If you’re not careful, however, you’ll earn the wrath of the different factions, which could lead to riots (possibly ending in your death), to your being fired from your position (which could lead to your death), or to being guillotined (which will definitely lead to your death). To analyze the cases, you connect keywords in case documents to find questions to ask the defendants, and depending on the questions you choose and the order you ask them in, you can influence the jury’s feelings about the case.

Tomorrow is the Judgement Day

In one of the cases I played, I had the task of deciding the fate of the main character’s son’s former tutor. Everyone, from the revolutionaries to the commoners on down, believed him guilty—except my proxy’s wife and son. I knew that if I asked the difficult questions I likely would have discovered that the tutor and priest (a dangerous thing to be in the era) really was guilty, but I chose to avoid those questions, leading the jury astray and acquitting the priest on personal motivations. People were, to say the least, pissed. I presided over several cases, including the trial that decided the fate of Louis XVI, one of many historical cameos that appear in We. The Revolution. There are other aspects to the game, including a map where you move agents around as you gain influence and fight counter-agents, as well as a system where your speeches can anger or calm a crowd, but the game centers around the court cases. Rightfully so. 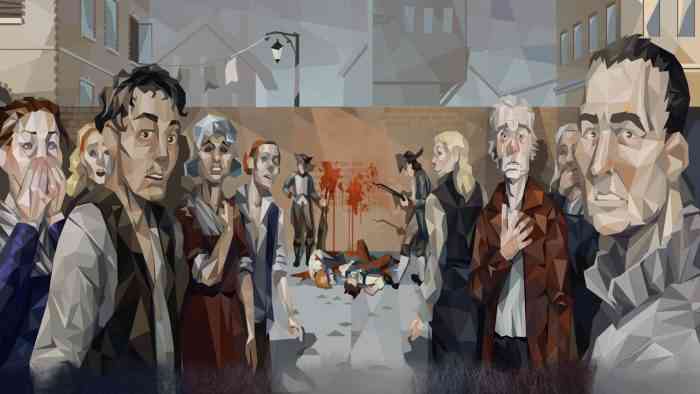 The developers are working to localize it from Polish, not only into English, but French as well, and describe it as a tool for increasing historical knowledge as well as a challenging, enjoyable strategy game. The design—the recent recipient of Best Art from the 2018 Pixel Awards—is gorgeous and reflects the faceless dark times that the game is set in, where individual humanity is denied in favor of mob rule and the ideals of a nation overpower the needs of its people…Can you tell I’ve got high hopes for We. The Revolution?

Clid The Snail Review – Definitely Not a Snail Crawl
Next Bloodroots is a Fast, Brutal, Jackie Chan-Inspired Tale of Revenge
Previous Transpose is a VR Game That Won’t Stop Scratching at my Brain