Rock Band 4 and Harmonix have their work cut out for them. As the Guitar Hero franchise attempts to re-invent the franchise with some unprecedented ingenuity, Rock Band 4 is looking like more of the same old. This isn’t meant as a slight in any way but by all accounts everything we have seen thus far looks and feels the same. This being said, the development team at Harmonix have introduced a few new features to the mix. Some of which, we had a chance to get a taste of when we played a Rock Band 4 demo at PAX Prime 2015.

The core of the Rock Band experience remains intact with Rock Band 4. You can pick up the guitar, smash your drum kit or bellow out some lyrics as you play your way through your historical library of Rock Band songs or jam with the new ones. Those who have sunk crap ton of cash into all those song DLC’s from the past can breathe a sigh of relief as all those songs are playable. As far as we know, the same cannot be said for the Guitar Hero franchise. While some may dismiss the importance of being able to play your old tunes, it’s a game changer. For me, there is no doubt it will be great to go back down to memory lane to play some of those old tunes on my Xbox One or PS4.

Playing these old songs is all fine and dandy but there has to be some innovation and Rock Band 4 does just that. By focussing on self expression and allowing players to truly cut loose, the development team has introduced “Freestyle Solos”. This was the focal point during my time at PAX. Here you can play any way you want, creating whatever sounds you would like and the result is pretty awesome. These “Freestyle Solo” moments occur at the point of song when the lead guitarist does his solo. It’s not forced or doesn’t feel unnatural in any way.

Now this isn’t exactly a genre bending innovation as the Dance Central franchise, for instance, typically has a freestyle dance portion of every song where you can wiggle your butt any way you like. During this part of the song, you aren’t forced to strictly follow the dancers on screen. Rock Band 4 is the same in that you don’t have to press the correct button to produce the exact note. It’s all about freedom and surprisingly enough, it’s a blast! 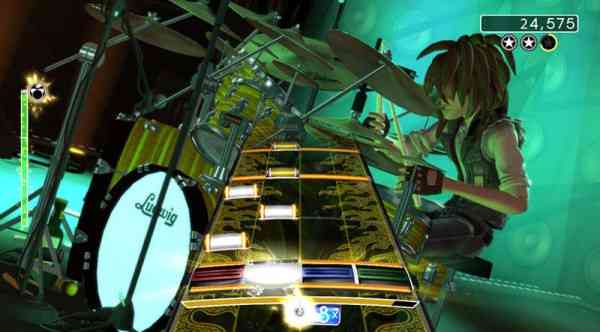 I was shocked with how good I sounded during these Freestyle Solo segments. I had no clue what I was doing really. I was changing up the strumming speeds, mixing up the button presses just for shits and giggles, rarely did it sound bad. The game does offer a little guidance and naturally you sound better the closer you follow instructions but otherwise you aren’t handcuffed at all. It’s that freedom that seemed to really resonate with me.

Other new features we learned from our time with the game at PAX also involve singing and drumming. Vocalists can now do free form melodies and add their own harmonies to songs. This activates certain bonus and helps singers rack up their points. Not to mention all of the DLC and songs that were released prior to Rock Band 3 will support vocal harmonies. Drums have also been tweaked to address some of the latency issues that hampered past games. Bottom line, expect to see some changes to almost all areas of the game.

All in all, I enjoyed my time with Rock Band 4 at PAX Prime 2015. While I question whether the development team has brought enough “new” to the table, I am genuinely excited to jump back into a franchise that has been dormant for so long. I feel ready and the timing feels perfect. Let the war begin next month!

World’s Best Guitar Hero Player Exposed as a Cheater
Next Pollen Hands-On Preview – A VR Experience that Feels So Much More Than a Game
Previous Darkest Dungeon “Those From Below” Preview – Stress and Starvation, Two of My Favorite Things…