Developed by FromSoftware of Dark Souls and Bloodborne fame, Metal Wolf Chaos originally released in 2004 on the original Xbox as a Japanese only title. Fast forward over a decade later, and Metal Wolf Chaos XD is set to release worldwide on the PC, PS4, and Xbox One in 2019 thanks in part to publisher Devolver Digital. As the title originally launched for the American made console, FromSoftware opted to utilize extensive American patriotism and references, and honestly, this is what made the game memorable for me.

At its core, Metal Wolf Chaos XD is a third-person shooter where the player pilots an armored mech, battling enemies such as soldiers, helicopters, and bosses. Between battling enemies, players will move through a level with destructible environments, have secondary objectives, and generally just shoot a lot of things. The combat in the game was decent, but the movement options in the game were somewhat harder to grasp. Although typically the gameplay is perhaps the most important aspect of a game, Metal Wolf Chaos shined in a different area.

To set the stage, you play as Michael Wilson, the President of the United States, and you must fight against a military coup headed by the Vice President. That premise alone is worth the price of admission, but the crown jewel of Metal Wolf Chaos (and by extension Metal Wolf Chaos XD) is the fine voice acting of the game. To describe it simply, the voice acting in Metal Wolf Chaos is overexaggerated, cheesy, and glorious, filled with memorable quotes and dialogue that had me laughing during the demo. 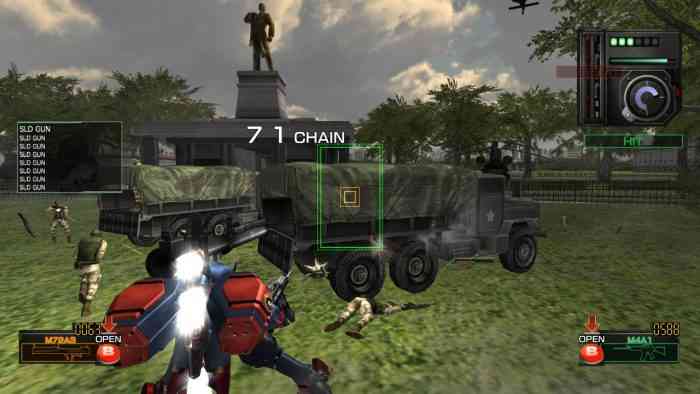 In addition to keeping the original voice acting, Metal Wolf Chaos XD will have an increased resolution, widescreen support, and both gameplay and visual improvements. I was a bit amused when I first heard that the original voice acting would remain intact, and after experiencing it first-hand, am absolutely certain that this was the right call. In a landscape with many releases on a weekly basis, the voice acting in Metal Wolf Chaos XD is sure to bring attention and long-lasting memories to this mech shooter.

Fall Guys Is the Most Downloaded PS Plus Title

Mortal Shell: The Good, The Bad and The Ugly

Want a Game Under $20? The PlayStation Store Sale Has You Covered
Next Elea Is a Sci-Fi Tale Weighed down by the Gravity of Poor Mechanics
Previous Encased Hands-on Preview – Space, Storytelling, and Sideburns