Eastshade is Mesmerizing, Magnificent, and Full of Monkeys

Eastshade, the second game (believe it or not) by Eastshade Studios, is an open-world exploration game that centers on artwork instead of destruction and easels instead of swords. You play as an artist who shipwrecks on Eastshade (the island, not the game or the studio), finding themselves in a gorgeous landscape dotted with picturesque buildings to paint and interesting characters who want you to paint them. In the demo I played at PAX Rising, I only experienced a fraction of what promises to be a six-to-ten-hour game, but I thoroughly enjoyed my time with the monkeys, antelopes, and owls (but mostly monkeys) of the island, who sometimes helped, sometimes confused, and sometimes rebuffed my artistic ways.

The main mechanic involves finding the materials to make a canvas and then painting the scenery around you by clicking a couple buttons, which sounds like a cop-out (or a relief for those who would be very opposed to painting for real) until you realize that the real joy is looking at the island around you. Deciding what you want to paint (spoiler: everything) was a constant delight, and enough praise can’t be said about the artwork.

The environment would be impressive for a triple AAA game, and I can’t imagine the amount of hours that Eastshade Studios put into the game to make it look so good. The grass and the trees practically glowed with life while I explored the world, and the architecture of the buildings was both classic fantasy and completely inviting. I had the thought while playing that I wanted to live in this world that this studio has crafted, that watching the ships drift by in the harbor from a comfortable seat in the inn sounded lovely. 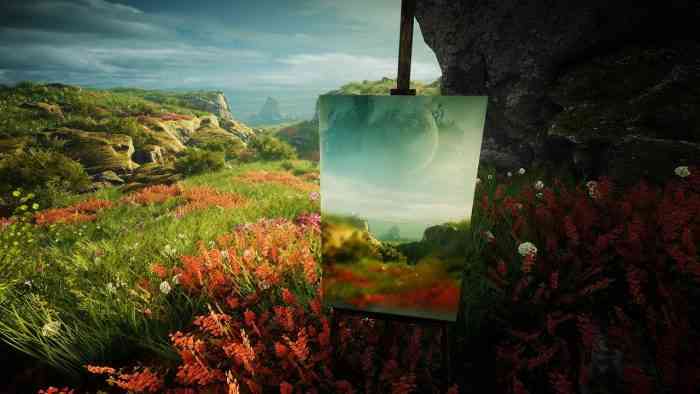 There are plenty of quests to keep you out of your seat, of course, and they range from helping a little girl (monkey) start her own painting career to gossiping with a nosy owl about whether or not the local antelope dad is a good enough father to not have his son taken away (he doesn’t help his own case, considering that while you’re gossiping, he’s got his head stuck in a jar). Right now, the game is obviously still in development, with a few minor glitches and a couple fairly large ones disrupting my gameplay, but I have confidence that by early 2019, it’ll be completely ready for launch, its bugs worked out so that established and emerging artists alike can explore the fascinating and breathtaking world of Eastshade for themselves.