Forza Motorsports has been solid racing franchise that has graced all versions of the Xbox since the original console launched. Developer Turn 10 continues to make a racer that is fairly accessible while still providing a sim experience for the diehards, and this week during E3 they took the wraps off of the next version, aptly titled Forza Motorsports 6. We got some hands on time with the game, getting a chance to race in the rain, during the night, and on the scenic roads of Rio de Janeiro. After putting a few cars through their paces we are here to tell you what we thought.

First off I have to say that I have indeed played all iterations of Forza Motorsports, starting with the first one on the original Xbox. I have faithfully stuck to the franchise including the offshoot games Forza Horizon and Forza Horizon 2. Bottom line, I enjoy the series as a whole so going into my playtime with Forza 6 I had some high expectations, and for me personally, I felt they were met.

“Adjusting my driving on the fly was something I found myself doing even more than in the past given the sim aspect when racing on a rain soaked road requires such.”

Of course the biggest, and most noticeable, additions to the game are the ability to race in the rain as well as during the night. For those wanting to race EVERY track in the rain, it is not possible as Turn 10 is keeping it as real in such that the tracks found in areas that see very little to no rain will not have this option. For example, Yas Marina in Abu Dhabi is not playable in the rain, as they don’t get any. As for night racing, the dev-team didn’t say whether or not all tracks will available to race in the dark, but they did state that the tracks that do indeed have such (e.g. Le Mans) will be available to race in game at night.

In regards to racing in the rain, I have to say that I was very surprised with how the physics of the water did indeed affect my racing experience. I took to the wet pavement on the Brands Hatch Circuit. Water pools up in key areas of the track, just like it would in real life, and forms puddles (3D puddles according to the developers), that when you drive through them they will pull you one way or another if you’re not careful; and that includes the AI drivers too. Your car definitely handles much different than if you were racing on a dry track, and it was very evident when hitting the rumble strips in the corners. They are much more slippery and unforgiving than when you hit them on a dry track. Adjusting my driving on the fly was something I found myself doing even more than in the past given the sim aspect when racing on a rain soaked road requires such. The sound of the rain hitting your car and/or windshield is fairly impressive as well, as you’ll notice that different surfaces of your car (e.g. metal vs. carbon fiber) or the view that you are in results in subtle but distinctly different sound. 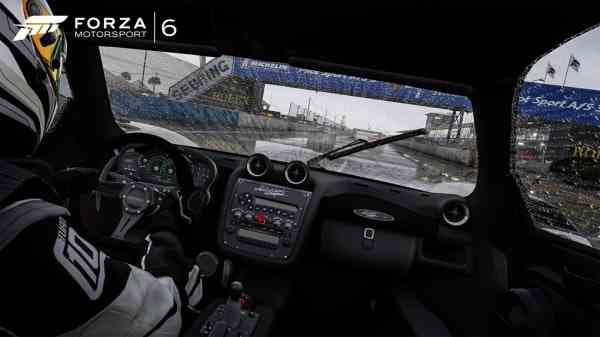 The next track I played on was Sebring, but it was during the night. Watching others play it I recognized it right away prior to getting my chance to hit the dimly lit virtual concrete. I have to say that racing under the lights of this well-known track was pretty cool and will change the way some people race. For those that have this track memorized right down to the last detail, it may not make too much of a difference except for the visuals (night versus day), but for those who aren’t so memory efficient, or just want race without the technical details, there will be a few surprises, as some visual markers or cues for braking or turning will not be as prevalent for you to view and use as reference points. Heck, as I write this preview I realize how it affected me and how it can effect expert racers too, as many have become adept at using things in the distance to gauge their racing line or braking points. I think a lot of people will appreciate this addition to the series as it adds more to the overall experience.

The final track I raced on was the Rio de Janeiro track. I have to say that for some strange reason I was not prepared for the scope and feeling of racing on this track, which is quite large. Right from the start you get a feeling of “epicness” as you start down by the water and watch as a large commercial airliner makes its way across the Rio airspace. I was initially raced in a classic Ferrari, but during a second play through I hopped into the new Ford GT40. The track has many tight turns, along with some wide open areas. For me the visual splendor was a major highlight here, such as seeing the famed statue of Christ the Redeemer high in the mountains while hang gliders floated around it, it was pretty impressive. Driving down the streets lined with buildings and structures that are native to the area was a treat too, yes, I said treat, as it added to the fact that you were indeed racing through Rio, and not on just on some closed off track. I know that some of you may not know me, but you have to trust me here, as the feeling is just one that you have to experience to appreciate.

“Turn 10 continues to evolve and improve their storied racing franchise, and September can’t come soon enough for this virtual gearhead.”

One thing that I have to mention is the game’s control. At home I always use a controller for my racing experiences, as this is just the way I roll. Something I noted right off the hop was how smooth the game’s control felt. Having put in many hours on Forza 5, and a few more into Forza Horizon 2, I truly felt that the control has been fine-tuned. It seems that some work has gone into making the controller experience even better. I also got a chance to use the new Elite Controller during a second play session on another day and the difference was even more noticeable. Now, I am not trying to sell you a $150 controller for Forza 6, but I do think it’s worth mentioning how the game felt playing with it. And just think, you can use the Elite Controller’s included paddles as shifters, which brings a whole new level of playing Forza to the table.

Visually the game runs silky smooth, and this is with a total of 24 racers on the track. Lighting seemed more noticeable in the game as well, especially during the night races as you zip under any one of the light poles on the edge of the track or see the track details as your headlights shine on them. The same can also be said for the rain effects. You’ll find that the rain droplets not only form on the window of the car when racing in the in-car view, but on the camera as a whole during those times you race in the hood view, bumper view, or one of the two ‘behind the car’ views. Heck, the droplets even move depending on your speed and direction you are turning. It’s subtle but yet very impressive. 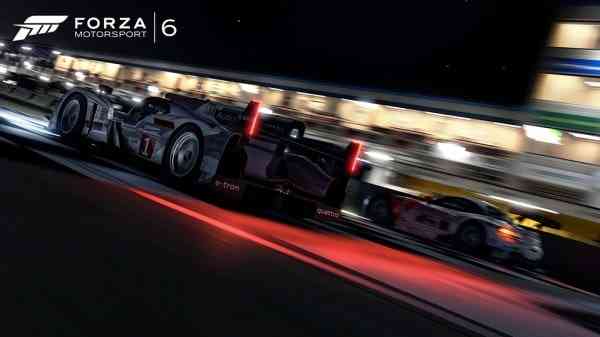 Overall I have to say that I am once again looking forward to the next edition of Forza. With 450 cars, 10 new tracks scanned, and a 70+ hour single player campaign, there is a lot to do and see. Of course we can’t forget the online portion as well. There was brief discussion about leagues being introduced for Forza 6, but more about this will be released at a later time. Turn 10 continues to evolve and improve their storied racing franchise, and September can’t come soon enough for this virtual gearhead.