Disco Elysium Brings All the Bodies to the Yard

You wake up with a lizard-voice in your brain and no pants on your lower half. I still don’t know what all of it means, but it’s an exciting way to start off all the day. In ZA/UM’s game Disco Elysium, you play as a hard-boiled, clearly alcoholic detective who wakes up with no recollection of who he is or where he’s staying. Also, there’s a dead body hanging outside in the tree, and he’s the one who’s supposed to do something about it. Maybe the lizard brain has something to do with disco powers, but that, as far as I played the demo, isn’t clear yet.

Disco Elysium gives you many paths and lets you take the one you want as the gruff, mustachioed detective who definitely isn’t named any of the ridiculous fake names he keeps trying to pass off as his own. It’s a murder mystery mixed with an RPG mixed with modern fantasy, and the highlight of the demo was interacting with the other characters, all of whom had been tailored with their own personalities and motivations. Yes, it’s standard for this type of game, but Disco Elysium’s characters are gritty but still fun, a combination a lot of games try for and miss.

And Damn Right, They’re Better Than Yours

I especially enjoyed the main character’s detective partner, a quiet but frighteningly competent Japanese (or this modern fantasy equivalent) officer named Kitsaragi. The banter between him, the protagonist, and the other characters always brings humor to the situation even when Kitsaragi doesn’t intend it—and this game is very funny, with a ton of killer one liners throughout. And although the character models need some work in how they move through the world, the backgrounds are sprawling and detailed, showing the dereliction of the main character’s new environment with artistic pleasure. 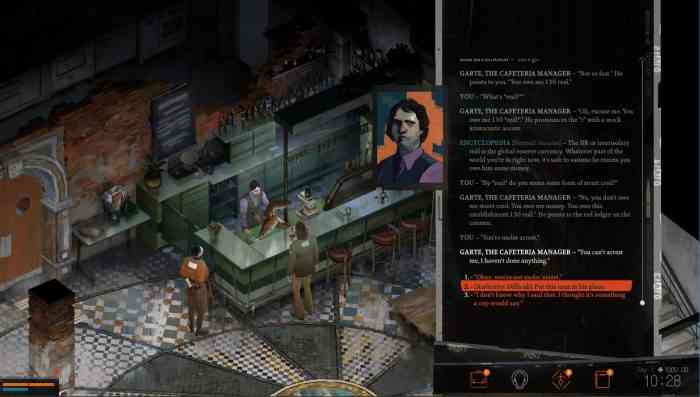 Right now that game is missing some voice lines and needs some polishing, but it’s in its last ten percent of development, and it’s clear that they’re close to the finish line. The story is where the devs promised me that they’re using their last months with the game to push the content, and I look forward to seeing some of the rough edges smoothed out. I played about forty-five minutes of the demo, and the entire situation with the strange voice in the protagonist’s head that talked a lot about primal feelings and wanting to sleep (me too, I tell the lizard-voice: I also want to sleep), as well as the connection to disco powers, were unexplained. Once the game is released, however, that connection will likely come along along. My mustachioed protagonist and I had only scratched the tip of the surface by the time I finished the demo, leaving behind a union on strike and kids throwing rocks at a corpse.

Disco Elysium has style in spades and a mysterious dead man hanging from a tree. What can I say: how can I not look forward to a game like that?

Experience The Retro-Future With Replaced
Next Shadow of the Tomb Raider PAX West 2018 Demo Casts a New Silhouette
Previous Bloodroots is a Fast, Brutal, Jackie Chan-Inspired Tale of Revenge