AGDQ Is Just What Gaming Needs to Start 2015

Let’s face it, 2014 wasn’t the greatest year for video games. Don’t get me wrong, there were a great many games that came out last calendar year that were truly fantastic. The prevailing trend, however, was broken games hitting the market and promising games being delayed until 2015. Add on several black eye moments such as “gamergate” and I think we can all agree that 2015 offers a much needed fresh start.

Now let’s put all that behind us, because 2015 is shaping up to give us a potentially fantastic year. More importantly, 2015 will be what we make of it. What I want from 2015 is for it to be the year we recognize all that’s good about games and the gaming community, and that starts with Awesome Games Done Quick 2015. 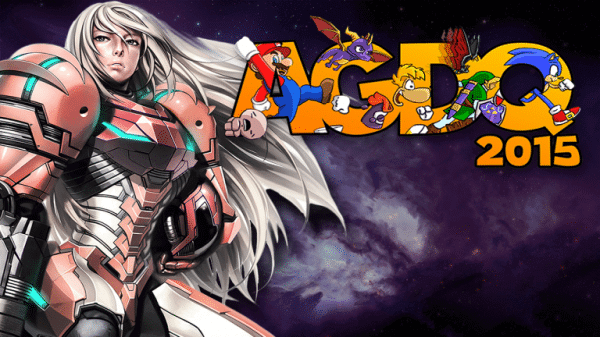 “There is absolutely no negativity surrounding this event. Everyone there is passionate about games, dedicated to their craft, and supportive of one-another.”

For the uninitiated, Awesome Games Done Quick (AGDQ) is an incredible event where many of the world’s premier speed runners get together and play through hundreds of classic video games as quickly as possible. Everything is done in the name of charity, with all proceeds this year going to the Prevent Cancer Foundation. What really makes the event is hearing the speed runners explaining the various tactics and glitches while performing the run, much to the awe of the fans behind them. Here’s my favourite example from a couple years ago. Cosmo does a fantastic job describing the full history of Ocarina of Time speed running while giving credit to other members of the community and destroying one of my favourite games in under 25 minutes.

This event lasts all week and covers every game you could possibly imagine. On Monday I found myself entranced watching Sonic and F-Zero speedruns. Every bit of it is fascinating and amazing. There is absolutely no negativity surrounding this event either. Everyone there is passionate about games, dedicated to their craft, and supportive of one-another. Money is flowing in at a rampant rate as well, with the total eclipsing the quarter million mark already. I encourage everyone to watch and donate at gamesdonequick.com.

This is the start of potentially a truly incredible year. There are a few events like these that have been around long enough that they are really exploding into something special. I personally can’t wait to take part in the Extra-Life charity gaming marathon in November. I did it once with a friend and it was amazing. I’m planning on doing it with a larger group this coming year. Events like these are amazing and really highlight what we as a community are capable of achieving.

On the pure games front, the obvious spillover effect from so many games being delayed last year is that we have a TON of great games to look forward to this year. The Witcher, Uncharted, Bloodbourne, No Man’s Sky (Maybe) and all the other games we’re excited for should make for an excellent year. If there’s one thing we learned last year, it’s that a game being delayed is way better than a game that gets released as a broken mess. Take your time, devs, and make those games great!

2014 had its moments, but overall it was pretty ugly. 2015 will only be as good as we make it as a collective gaming community. From publishers, devs, and console makers, all the way to reviewers, journalists, and especially players, we have the power to make 2015 great. AGDQ is an amazing start, and it’s up to us to carry that momentum forward to bigger and better things.

Next Entitled Gamers – Gaming’s Big Fat Diaper Babies Need to Shut It
Previous Gamer Girls Magazine: Where is it Now?