Fallout 4 is upon us and bound to be one of the biggest games of the year. In fact, it’s so big that it has hijacked our much beloved COG “3 Up, 3 Down” list. After 6 years of waiting, fans will be able to return to the wasteland in order smash zombies, enslave children, and blow up cities. Bethesda has boasted a ton of improvements, all of which will surely come as a welcome change to the franchise. However not everything is nukes and rainbows, as there are some things that hold back the game from total greatness. Without further ado, here’s three things I enjoyed about the game and three things I didn’t.

1 – The Combat is Awesome

The combat in Fallout 4 has drastically improved over its predecessor. Combat in Bethesda games has always been a bit finicky, with games relying on storytelling and exploration over killing things. In an interview with Gamespot, Bethesda creative director Todd Howard admitted that the shooting in Fallout 3 was “meh” and that Fallout 4 needed to be built as a first-person shooter, “a really, really good one”.

True to his promise, Fallout 4’s gunplay is tighter, putting it more in line with traditional fps games. I found myself primarily aiming down sights in order to subdue my foes from a distance and using VATS when enemies started to swarm or get too close. Furthermore, melee attacks feel less floaty and provide more weight behind each swing; enemies stagger realistically from your strikes as do you from theirs (ruining your aim, annoyingly so). These changes provide a deeper sense of immersion and greatly improve the action oriented gameplay. If you were previously turned off by the shooting mechanics in Fallout 3, Fallout 4 may just put the franchise back on your radar. 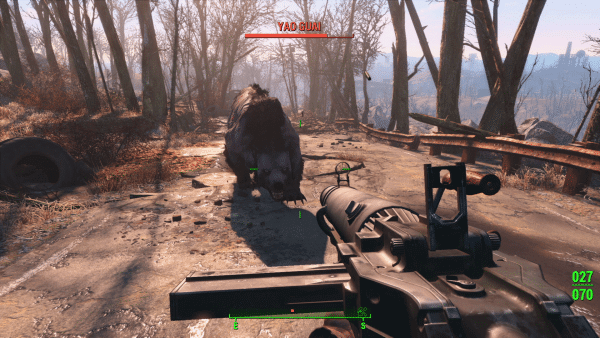 2 – The Graphics Are Amazing

Previous games from Bethesda, such as in the Elder Scrolls or Fallout, have not been the most graphically impressive games. Looking close up would revealed blockiness, poor textures and characters were a little bit lifeless, like robotic walking pylons.  Well, no more! Fallout 4 is the most graphically impressive game Bethesda has made to date, unquestionably being able to stand toe to toe with almost any game on the market. NPCs and enemies have more dynamic movement in and out of combat, and more realistic facial expressions during conversations. Safe to say we wont need many fan-made character model or graphical mods for this game (well…a few “sexy” mods wouldn’t hurt!).

Another chief complaint of the Fallout franchise as a whole is how drab the world is. Look to the left…grey…look to the right…grey… To relieve the boredom from the previous dull palettes, Fallout 4 has added splashes of eye popping colour throughout the world, and man is it pretty. Though the end of the world is bleak for humanity, nature still marches to a symphony of autumn reds, golden hues and sky blues.