Beware is a game by an independent developer named Ondrej Svadlena, where the player drives through nameless countryside locations of (assuming by the make of the car) Czechoslovakia. It is dark, sometimes rainy, sometimes foggy, and all around creepy. The players is all alone on the road, with the exception of Pursuers. Think of the driving parts in the first Jeepers Creepers movie. 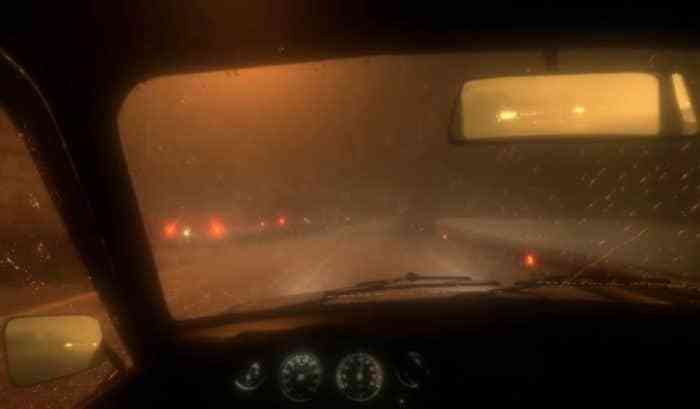 Beware has been in development for several years with playable demos coming out since 2016. After the player drives by a power plant at night, several men in dark suits witness them and then pile into a car and begin pursuing. The player must drive, hide, and escape the Pursuers they are run off the road or sustain to much damage.

The “drive through” video that Svadlena uploaded this week shows off a bunch of different areas of Beware, from the early countryside stages of the game to the power plant and big city areas later on. We also see some of the Pursuers’ bigger vehicles, which appear to be enormous dump trucks outfitted with mysterious high beams and in some cases lasers. If these vehicles run into you, your car gets squashed.

Svadlena updates his fans of Beware on his Patreon pages kind of sporadically, but the demo is available for free. The drive through video apparently shows the “last region” of the game, so hopefully fans will be seeing a full release soon. Beware does not have an official release date, but when it does, you can expect it to come to Steam.

Have you played or seen Beware? Let us know in the comments below.


Lemnis Gate Has a Confusing, but Wild Time Loop Concept