What Is Speed Without Direction?

Among Sonic the Hedgehog fans, Sonic the Hedgehog is kind of divisive. On one hand, there were some amazing, classic Sonic games. On the other hand, there hasn’t been a really good Sonic title in like six games. For such an iconic, recognizable character, his games have a pretty bad track record, so you’ll have to pardon me if my blood isn’t pumping at the announcement of a new Sonic game. Thankfully, this is an enhanced remaster of one of the more favorable games in the past several years, Sonic Colors Ultimate. 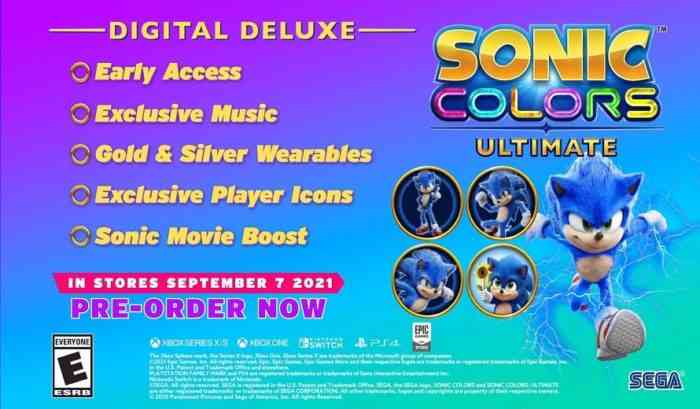 The original Sonic Colors was released in 2010 on Wii and had a Nintendo DS port. It used a lot of elements from the previous games like working within 2D and 3D spaces; some sections had side-scrolling platform mechanics and others had more of an on-rails path, in which you were often literally on rails. One of the unique elements in this game was the Wisp power-ups, of which there are eight. Each of them give different traversal abilities, such as a basic speed boost or the power to ride walls and ceilings.

You can pre-order Sonic Colors Ultimate right now. This comes with a Baby Sonic keychain, but if you get the Digital Deluxe Edition, you will also get early access to the game, exclusive music, “Gold and Silver Wearables”, exclusive player icons, and “Sonic Movie Boost”, which appears to be a tie-in to the Ben Schwartz/Jim Carrey movie. Sonic Colors Ultimate will be available on September 7th for PC, PS4, Xbox One, Xbox Series X|S, and Nintendo Switch.

Will you be taking Sonic Colors Ultimate for a spin? Let us know in the comments below.