Iron Man is an iconic superhero from Marvel. He’s a dude with high-tech armor that can fly, shoot lasers, and rockets. Despite that description, it’s pretty outstanding that Iron Man is not primarily an anime character, though he has done anime stints before. Final Fantasy director Tetsuya Nomura, who has designed a countless number of our favorite characters from the series, is showing off his take on the Armored Avenger. Now that Square Enix and Marvel are working together on the Avengers game, Square Enix is selling this sweet Iron Man action figure. 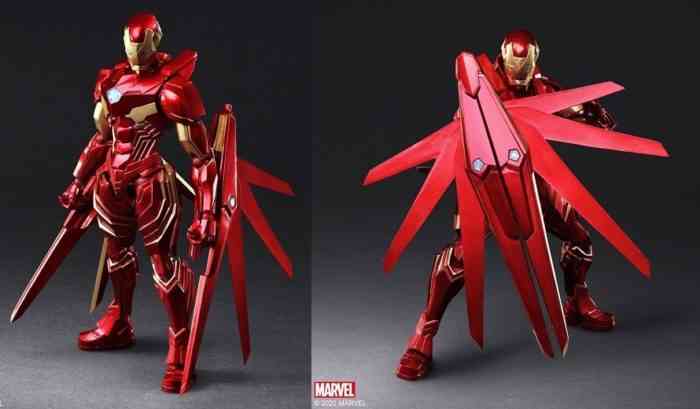 One look at this Iron Man figure and you can see the influence of Japanese mechs. The patterns in the armor, the multiuse wings, and the lines in the face make it look right out of the Gundam manga and anime. Many of the iconic mobile suits from Gundam have wings for flight mobility. Some of Iron Man’s designs also take on this concept, most notably the Bleeding Edge armor that uses nanotech to change forms on the fly. This Iron Man figure has these wings that can be mounted on his back or held in his hands to be used for fight, flight, or defensive capabilities. It also comes with different attachable hands for different poses.

Tetsuya Nomura has not just designed Iron Man, he has also designed figures for Spider-Man, Thor, and Captain America. Those ones may be a bit out there considering the original designs, but Iron Man’s armor blends nicely with Japanese mech styles. These figures come with many attachable pieces and display stand for each. They will also set you back about $134.99 each. Marvel’s Avengers is available on PC, Xbox One, PS4, Stadia, and will soon be out on PS5 and Xbox Series X.

Do you like the look of this action figure? Let us know in the comments below.

A New Combat Style Revealed For Final Fantasy VII: The First Soldier
Next
It Takes Two Gets a New Trailer Ahead of Its Release This Month
Previous
Rust: Console Edition Crafts a Spring Release Date