Tread the Line Between Hunter and Prey in Dinos Reborn

But Will the Dinosaurs Be Reborn With Fluffy Feathers?

Stop us if you’ve heard this one before. A faceless protagonist wakes up after crashlanding on a distant planet only to see that their new home is filled with beautiful and terrifying wildlife. To survive, they must explore, craft, and hunt in a first-person perspective, gathering information on what created this strange world, all while avoiding the notice or escaping from much bigger predators. No, we’re not talking about Subnautica! We’re talking about Dinos Reborn, a new open world FPP survival game in which you must run, sneak, craft, and shoot to survive on a planet full of dinosaurs. And also pterosaurs, which means we might also see some of the other species which made the Mesozoic period their home. Fingers crossed for Mosasaurs.

“The rules of this planet are quite simple. Kill or be killed. Hunt or become prey. Eat or be eaten. Here, even the smallest insect can become the cause of your doom. Simultaneously, you will often encounter creatures that will tolerate or even like you,” says the press release. “Forget about typical stat tables or character development trees. If you want to master a particular skill, you’ll need first to learn it the old-fashioned way. That means reading books, tutorials, and notes, as well as observing and repeating the same actions over and over until you start performing them automatically.” If that’s not enough to catch your interest, then check out the dynamic weather system–or, better yet, the detailed tracking mechanics. “Learn how to sneak up on creatures. Analyze their tracks, observe their habits, look for their weak points, and find the best moment to attack. Remember that each animal has a different sense of smell, hearing, and sight. As an experienced hunter, you will be able to hunt at night, but so will the creatures hunting you, so you should be all eyes and ears at all times.”

Currently, the creatures in question appear to be taking more cues from Jurassic Park than from modern science, which is a bit of a disappointment to us. We know that scaley dinos are the iconic image plastered everywhere, but come on, feathery dinos can be scary, too. Anyone who thinks otherwise has never looked an emu, a cassowary, or even a turkey right in its beady eyes. Even a sufficiently angry chicken can do a lot of damage. Plus, the feathery coating would allow for polar dinosaurs to look a lot less out of place. Don’t be afraid of fluffy dinos. 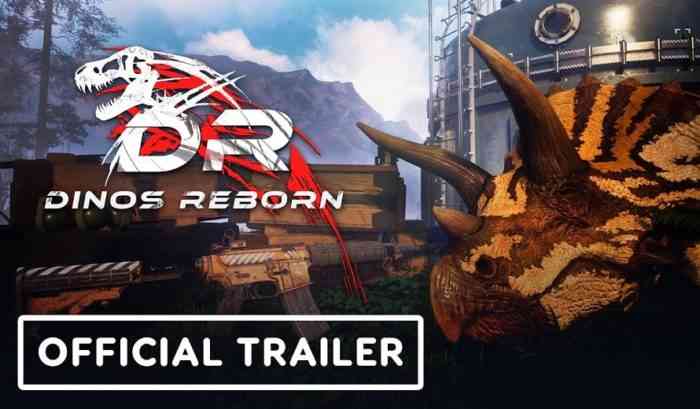 Dinos Reborn is being developed by HardCodeWay and will be published on PC, PlayStation, and Xbox in 2022.

Should more dinosaur survival games have feathery dinos? Let us know down in the comments, or hit us up on Twitter or Facebook.