An Eye for Testes

Well, we’ve done it. Between virtual reality and RDR2’s temperature-affected horse testicles, we have too much technology. The Sniper Elite franchise has gained a ton of popularity from equal parts sniper simulator and being able to literally shoot the balls off Nazis. With dual-wielding announcements, Rebellion Developments has revealed their plans for Sniper Elite 4 on Nintendo Switch and Sniper Elite VR on multiple VR platforms. This means pretty soon you can shoots Nazi balls as publicly or as privately as you want. 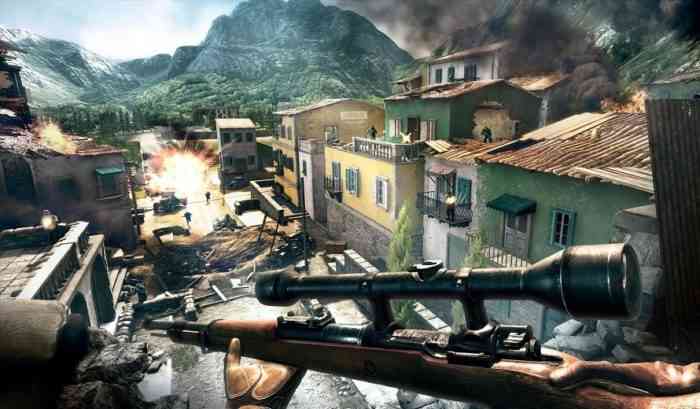 In two separate trailers, Nintendo Switch owners were told they could get their hands on Sniper Elite 4 this holiday season. At this point, you know what Sniper Elite 4 is what is has to offer from being out on PC, PS4, and Xbox One. Sniper Elite VR on the other hand, is an entirely new beast. The transition from being a 3rd person shooter to a first person VR game makes it look and feel very different. It looks like a lot of VR shooters and less like a Sniper Elite game. The trailer does not even show any iconic x-ray shots like we are used to from the series, but hopefully that will be an option in the game. There are also other shooter elements that are not present in pervious games, like dual wielding pistols. There is definitely more opportunity for run n’ gun situations.

Sniper Elite 4 is out now on PC, PS4, and Xbox One, and will be available this holiday season for Nintendo Switch. Sniper Elite VR will be out on Steam VR, Oculus Rift, Oculus Quest, and PSVR at an undetermined date.

Are you looking forward to either of these releases? Let us know in the comments below.

Choo-Choo Charles Is Scheduled for a December Release
Next
Get the Rundown on Cyberpunk 2077 Gangs in the Latest Trailer
Previous
Electric Deals to Keep you Gaming: Hard Drives, Headsets, and Hyperspeed Mouses