Hyrule Warriors: Age of Calamity Deluxe Edition Only in Japan (For Now)

Link That to North America

Japan always gets the good stuff. They have Gundams, they have J Pop, they have discipline, they have honor, they had Tom Cruise as a samurai that one time; they’re just the best. Hyrule Warriors: Age of Calamity was announced recently, and it appears that a deluxe edition of sorts will be out in Japan. Right now, there is no mention of that kind of deal being available here in North America though. Japan has got us again. The Japanese name of the game is Hyrule Warriors: Apocalypse of Disaster, which sounds way more metal, and its “Treasure Box” edition comes with a couple of cool things, but is it worth the price tag? 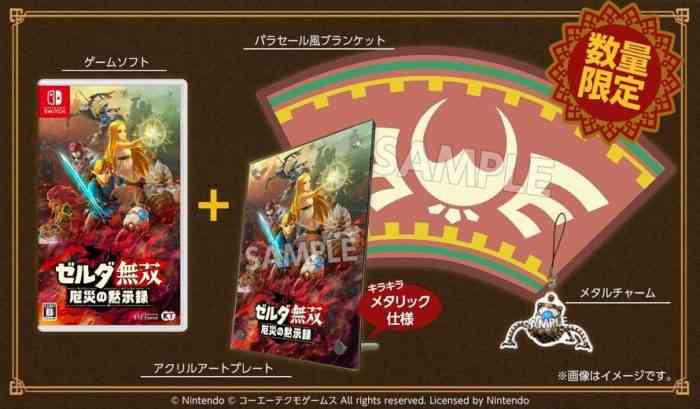 The Treasure Box edition comes with the physical game, a standing acrylic art plate of the game’s art, a metal keychain charm of a Guardian, and a parasail-style blanket. There is no listing of the dimensions of the acrylic art plate or the blanket, but for a $150 price tag, they should be sizable, hopefully. The blanket is also a strange shape. It is unclear it it looks like that in the ad to resemble the parasail or if it’s actually a curved blanket. That would kind of suck as a functional blanket.

As mentioned above, this Treasure Box edition is only available through Japanese retailers, so only the most die hard Western fans will try to get their hands on it. If this or a similar deal makes its way to North America, we will let you know. Hyrule Warriors: Age of Calamity will be out exclusively on Nintendo Switch on November 20th.

Would you get this if it were available in North America? Let us know in the comments below.

Legend of Zelda: Tears of The Kingdom Confirmed for May 2023
Next
Ubisoft India Explains Prince of Persia Remake Style
Previous
Roller Champions Racing Onto Consoles in 2021