Since March of last year, Hopoo Games’ Risk of Rain 2 has been weathering the Early Access terrain on Steam and consoles. Soon, they will be seeing the clear skies of their 1.0 update. Those who have yet to purchase and try out Risk of Rain 2 for themselves will be introduced to a new climate of prices. If you have been sitting on this game, you may feel a rise in pressure to purchase it before the price increase. We could see a high in prices in the mid-20s at some point in August. 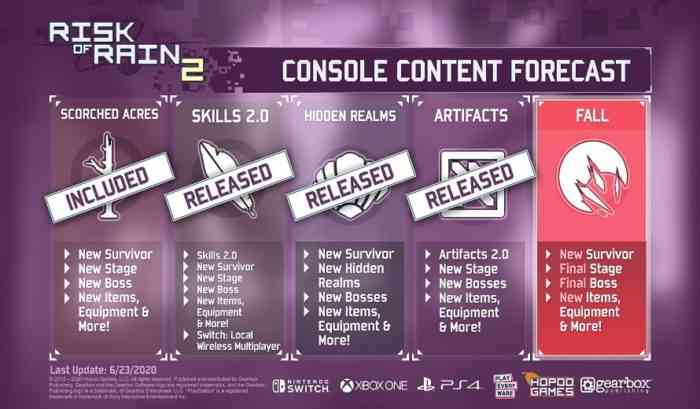 Hopoo Games has released an updated road map for Risk of Rain 2, and as you can see, things have been heating up on consoles leading up to the official release of the game. Update 1.0 will also see new content changing the atmosphere of the game, including new items and equipment, a new survivor, and the final stage and boss. As Risk of Rain 2 moves on from Early Access, Hopoo Games is looking to change up the workplace climate a bit. They will be beginning a season of hiring. That news is really only exciting if you are a developer experiencing a drought in work.

Because Risk of Rain 2’s price is on the rise, Hopoo may see a downpour of fans to soak up the low price while it lasts. And even though the game is reaching the milestone of an official release, don’t expect the well of content to dry up. Hopoo Games will continue to precipitate bits of content regularly. I hope this storm of weather puns haven’t rained on your parade. Risk of Rain 2 is out now on PC, PS4, Xbox One, and Nintendo Switch, but will be launching officially in August.

Will you be getting Risk of Rain 2 before the price increase or will you take a rain check? Let us know in the comments below.


Hades Leaves Early Access and Launches on PC and Switch

Final Borderlands 3 DLC Campaign Coming Next Month
Next
Don’t Get Too Excited, Mass Effect 5 Isn’t Releasing Anytime Soon
Previous
The Most Unlikely Candidate is Now at the Top of the Warzone Meta