In today’s professional climate, we find our living/bedrooms becoming meeting/conference rooms for video calls and business meetings. Not everyone’s home is ideal for that kind of exposure. Thankfully, Marvel and Square Enix has got your back. Instead of having your own room be the background for your video calls, it can be replaced by a teenage superhero fan’s room. Professional! Two images of Kamala Khan’s room have been released and they are packed with Avengers merchandise and easter eggs, not just from the game, but from Marvel comic lore. The images are actually looped MP4s, but let’s start will taking a look at the part of the room with Kamala’s bed. 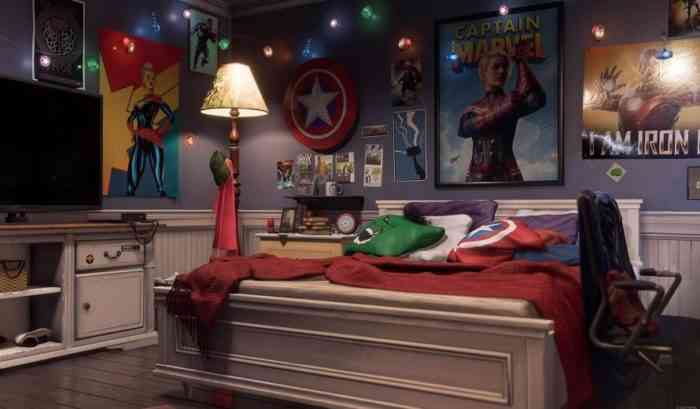 Newsarama’s Chris Arrant pointed out most of this stuff (via GameRadar+). There are obvious references all over the room like the Christmas light-like Avengers-themed decorations, but I’ll focus on the stuff that is easy to overlook. There are two big Captain Marvel posters. Not only to they confirm that Captain Marvel is a presence in the world of the game, but the one on the left is directly from 2012’s Captain Marvel #1. The one above Kamala’s bed actually depicts the suit from the Captain Marvel movie that Brie Larson wore. There are panels and covers of actual comic book art next to the bed from Thor and The Incredible Hulk comic books. There is also an incredibly small framed picture of Hawkeye on the side table. There are also framed photos of Kamala with her brother and her farther. Hanging up on the lamp (which has a collage of Avengers on the shade) is Kamala’s sash, which is part of her Ms. Marvel outfit. 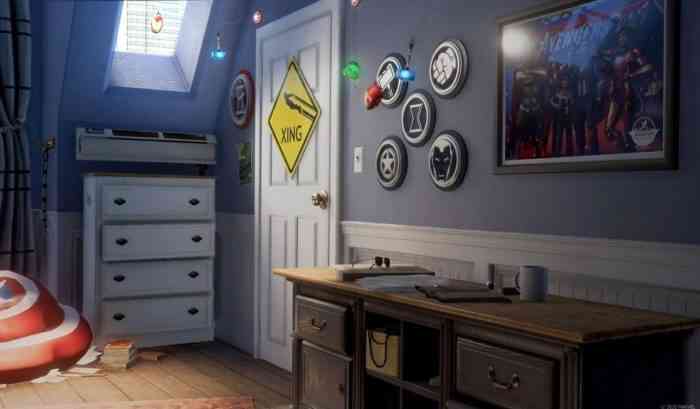 In the second image, there is not nearly as many tiny details to look at. There is the lanyard hanging up that Kamala got on A-Day where she meets the Avengers, as well as the framed picture she has with them on the wall. There are tons of other Avengers merchandise that fans would love to have in Kamala’s room. You can download the original MP4s here and here. Marvel’s Avengers is coming out on September 4th on PC, Xbox One, PS4, and Stadia.

Are there any other Easter Eggs that I or Chris didn’t find? Let us know in the comments below.