Over 700 Items For 5 American Dollars

While games companies and organizations are making a ton of statements in support of Black Lives Matter, not so many of them are putting money on it, so to speak. Meanwhile, itch.io is raising money with a #BLM charity bundle. It’s just a few hundred indie games for a minimum of $5 USD. 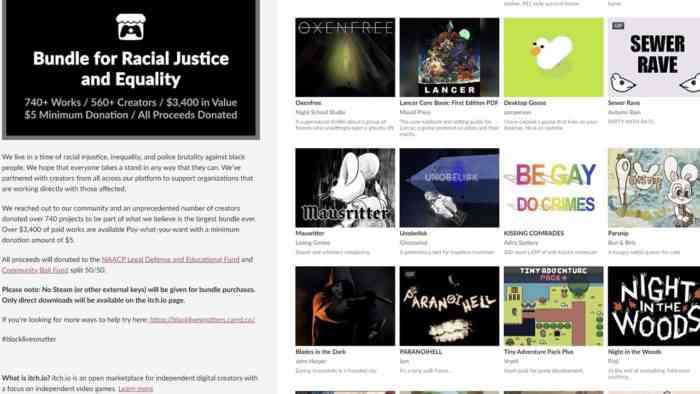 Sorry, there’s actually two separate bundles being offered right now. One is in support of Black Lives Matter, which has so far raised about $75,000. It features 20 games for 20 bucks, all of which are excellent indie titles in their own right. There’s also a second bundle being offered for Racial Justice and Equality, which has raised $1.76 million dollars. That one features 742 games for $5 USD. You can donate more if you wish, or if that price feels like stealing to you? It’s $3400 worth of games. Night in The Woods and Oxenfree are worth the price of admission alone, but I promise there are So. Many. More.

Either way, it’s a great way to donate to the cause while also supporting a hopeless addiction to buying games. Personally, it’s more than I’ll play for the next 20 years. Seems like an okay trade-off. If this many games seems like a devil’s bargain to you, there are other, less cursed ways to give to the cause.