Future Sega Games Will Be Packaged in Entirely Recycled Material

Though Sega’s traditional colour is blue, they are showing their green side with their new PC game packaging initiative. Though this is limited to their physical PC games, their example will hopefully inspire other publishers to follow their lead. Last year, Sega Europe and Sports Interactive shipped Football Manager 2020 (even though it’s a soccer game) in entirely recyclable cardboard. Now it seems that more Sega games will be following this packaging method. Last Thursday, Sega tweeted out an announcement that Total War: Rome II – Enemy at the Gates Edition would be shipped in fully recycled and recyclable material. 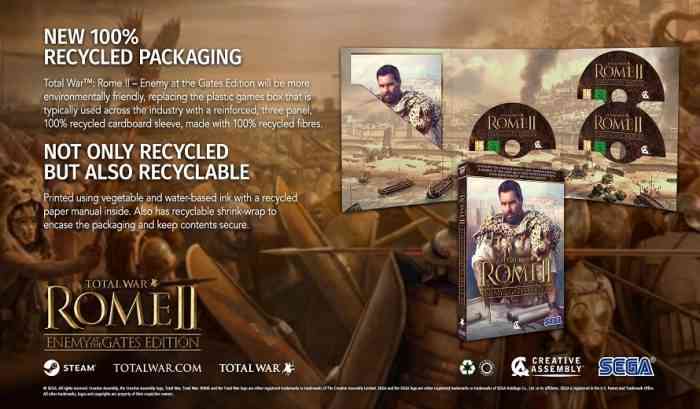 The manufacturing process of everything going into the physical game is getting the environmental treatment. The ad states: “Total War: Rome II – Enemy at the Gates Edition will be more environmentally friendly, replacing the plastic games box that is typically used across the industry with a reinforced, three panel 100% recycled cardboard sleeve, made with 100% recycled fibres. […] Printed using vegetable and water-based ink with a recycled paper manual inside. Also has a recyclable shrink-wrap to encase the packaging and keep contents secure.”

We’re pleased to announce that all of our future physical releases of PC games will be launched in fully recycled packaging!

Total War: ROME II – Enemy at the Gates Edition from Creative Assembly signals our intent to continue with this environmental initiative. pic.twitter.com/UdcwnQqSFU

Though this only applies to physical Sega PC games, this is a small but deliberate step toward being environmentally responsible. While many games are being downloaded instead of bought and shipped physically, other steps by developers are being taken, such as online or in-game game manuals and low-power settings for consoles. Total War: Rome II – Enemy at the Gates Edition will be available on February 6th on PC.

Do you wish more manufacturers would follow Sega’s example? Let us know in the comments below.


Sega Teases Something New For Its 60th Birthday