This year is the 10th anniversary of the Borderlands franchise. To celebrate, Gearbox is holding a series of events for the whole month in Borderlands 3. Each week of October will focus on different bonuses for players. This upcoming week, beginning tomorrow, will be the Borderlands 3 Rare Spawn Hunt, which is pretty self explanatory. Rare enemies will appear more often and yield better loot. Put on your Loot Boots and grab your Shooty Shoots because this will only last for one week. 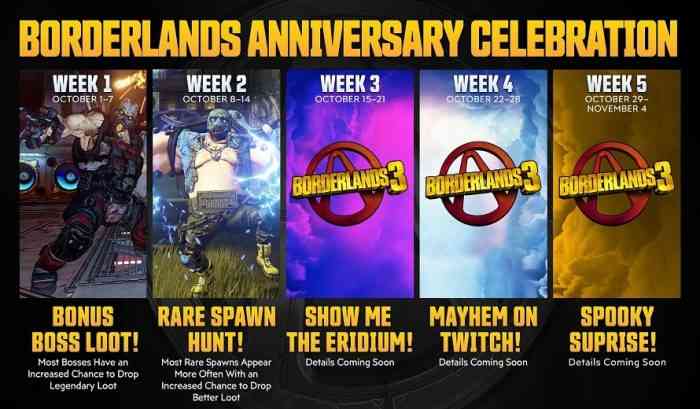 Gearbox has released a list of enemies that you can expect to see pop up more often this week. They’re so nice that they even tell us what kind of loot those enemies drop as well. The moving targets and loot are as follows:

You may have run into a few of these guys playing normally. You may also recognize the return of Rakkman from Borderlands 2 in The Fridge. If you have your eye on a particular weapon or item, this event begins tomorrow morning (October 8th) and ends on October 15th, when the next event Show Me The Eridium will begin. Borderlands 3 is out now for PC, PS4, and Xbox One.

What loot are you gunning for? Let us know in the comments below.