This Party Is Members Only

In about two weeks, the Gears 5 multiplayer test will begin. Back when Gears 1 was the new hotness, I remember the multiplayer matches being heavily affected by connection to the game’s host. Thankfully, that is a thing of the past. The goal of this test is just like any other beta or tech test. As the Coalition says, “This Technical Test allows us to stress test our servers over two focused Test Periods to ensure the best possible experience when large volumes of players rush in at launch.” Be warned: this tech test is available only to Xbox Game Pass members and Windows Store pre-order customers. 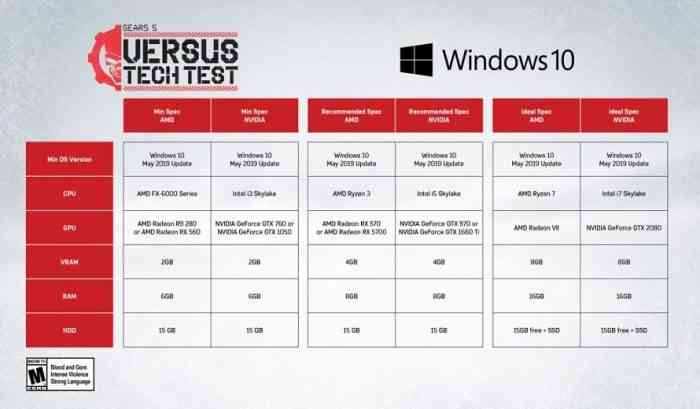 Like the Coalition said, there will be two testing periods. The first will begin on July 19th and run until July 22nd. The second will pick up on July 26th and end on July 29th. Players will be able to download the tech test on July 17th. It will be available for download  during the tests and between test periods. Players who are eligible for testing can play the modes Arcade, Escalation, and King of the Hill on two brand new multiplayer maps. There are two new modes called Bootcamp and Tour of Duty, which are both introductions to multiplayer. Completing all Tour of Duty medals will earn players Tester weapon skins and banners for the full game.

The Coalition also outlined the minimum, recommended, and ideal specs for PC user for this test:

Gears 5 will be launching in full on September 10th on PC and Xbox One.

Will you be taking part in the multiplayer test? Let us know in the comments below.