How old is Minecraft now? Ten years old? Who would have thought that over past ten years and countless updates, Mojang would still have enough up their sleeve for something to be called their “biggest update yet”. In their Village and Pillage update, there are two centric themes being followed here; Pandas and Villages. In the pandas area, new biomes are introduced: Bamboo Jungle and Bamboo Jungle Hills, both of which are lousy with the new plant Bamboo. Bamboo has a wide variety of uses including crafting, fuel, and of course feeding pandas. 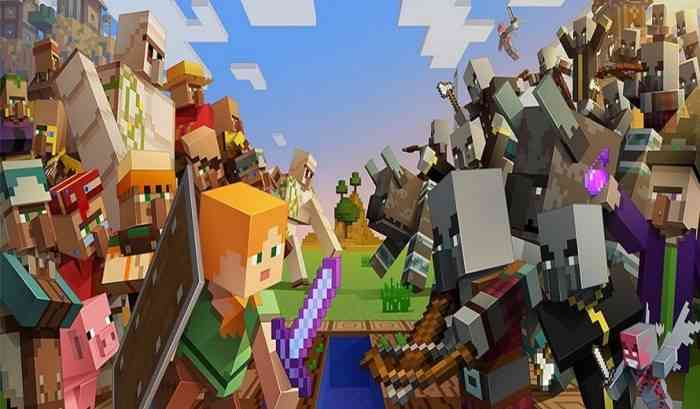 In the Village sections, architecture will be reflected by the biomes in which the villages are found in. That means materials available will factor in to what the villages look like. Up until recently, Villagers were very peaceful. Now we are introduced to a new village-type threat Pillagers. They wield a new weapon, the Crossbow. As you may have guessed, they pillage villages. Though Villagers are peaceful, they are not naive. Now, when a Pillager attack is imminent, Villagers can warn their village by sounding a bell. Ringing a bell will reveal all nearby hostile mobs on the map. In the “biggest update yet” there are a lot more things to catch up on. You can view it all on Java Edition’s 1.14 update changelog.

“Apparently, it takes a village to raise a child. Frankly, if we’d known how much work putting together the biggest Minecraft update yet was going to be, we’d have probably taken the easy option and tried to raise that child instead.” Sounds like this update was a lot of work. Update 1.14 has been live since April 22nd.

What’s your favourite addition or change in the update? Let us know in the comments below.

Mojang Rebrands Itself as it Makes Big Plans For the Future