Kingdom Hearts Statue of Cloud Strife can now be Pre-Ordered

Final Fantasy VII is one of the most popular games of the series, if not the most popular. That popularity is owed much to the brooding bad ass with the big-ass Buster blade: Cloud Strife. His iconic presence has taken him beyond the world of Final Fantasy VII into other games. In one form or another, he has made appearances in Lightning Returns: Final Fantasy XIII as one of Lightning’s garbs, Super Smash Bros. on the Wii U and 3DS, and the Kingdom Hearts series. In Kingdom Hearts 1, Cloud looks a bit different than how we’re used to. But that form has earned him its very own action figure. 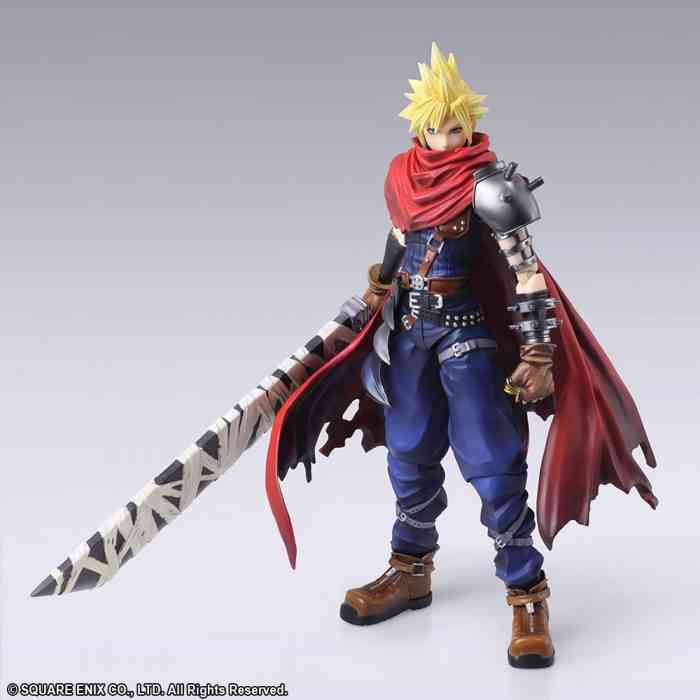 As I said, this look is quite the departure from his regular SOLDIER outfit or his Advent Children clothes. The reason he appeared this way in Kingdom Hearts was that they wanted to include both Cloud and Vincent Valentine, his Final Fantasy VII companion. Unfortunately, Vincent couldn’t fit into the game the way they wanted, so he and Cloud were pretty much mashed up and this is what came to be. As you can see in the image above, Cloud wears Vincent’s red cloak, and his left hand resembles Vincent’s gold gauntlet. In Kingdom Hearts, Cloud also has a black wing sprouting from his left shoulder to mirror the optional boss Sephiroth, who has a black wing on his right.

Now, regarding the figure itself, Cloud stands at about 7″ x 3″ x 4.5″. It comes with four replaceable hands, the left side of the red cloak can be swapped out for the aforementioned black wing, and a display stand. The regular price is $90, but it is on sale right now for $80 on the Square Enix online store. It can be pre-ordered now, but will release in July.

What do you think of the figure? What other Kingdom Hearts characters should they make? Let us know in the comments below.