Will Launch Alongside Spider-Man Game on Sept 7th

Sony will launch a limited edition Spider-Man PS4 Pro console alongside the game’s release on September 7th, it has been announced.

The Limited Edition Marvel’s Spider-Man PlayStation 4 Pro Bundle features a customized “Amazing Red” 1TB console unit that sports Spidey’s new white logo from the game on the top. A matching red and white DualShock 4 controller with white face buttons and joysticks round out the slick package. A physical copy of the game is included, as well as some digital content.

The bundle will be available in the US for $399.99 and $499.99 in Canada. Considering a standard PS4 Pro console already retails for the same price without a pack-in game, this is an awesome deal for first-time PS4 buyers or for anyone who is looking to upgrade to the new 4K machine. 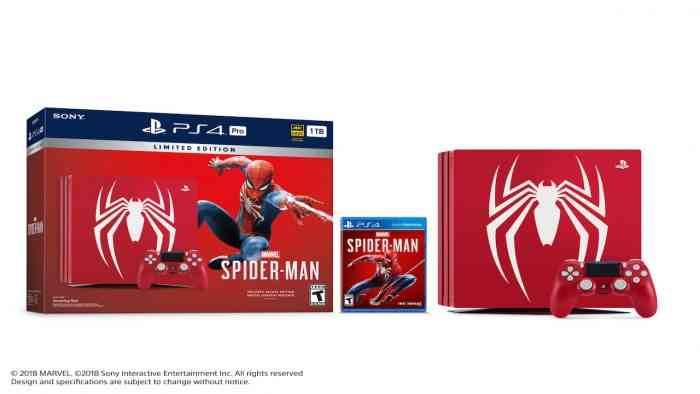 Sony also confirmed that Spider-Man will take advantage of the PS4 Pro’s enhanced features like 2160p dynamic 4K resolution and HDR (high dynamic range) support. Even if you don’t own a 4K TV, HDTV owners can benefit from the console’s built-in supersampling. The mode works by taking the 2160p image and then renders, or downsamples, the image to fit your screen’s resolution. The result is a cleaner and clearer image than simply running it in 1080p.

The limited edition bundle can be pre-ordered in the US right now. The option for Canadian pre-orders should be announced soon.

Will you be picking up this unique PS4 Pro? Let us know in the comments below.