Help Yourself to Some More, Overcooked 2 Coming This August

Relationships Will Be Tested in Overcooked 2

Overcooked 2, the sequel to the incredibly fun and chaotic co-op cooking game, has been announced by developer Ghost Town Games and publisher Team 17.

Overcooked 2 will include a popular fan-requested feature over the original game: online multiplayer. Four chefs can play at the same time cooperatively either in local wireless play or online. The game will come loaded with new recipes to cook, all-new characters, new gameplay mechanics, new kitchens and locations, and lots of other new stuff.

Some of the new recipes include steaming meats and veggies, boiling pasta, baking cakes, and even rolling sushi. A new mechanic allows players to throw their ingredients to one another instead of tossing them on the ground first. Judging from the trailer, the stages will change more frequently and more dramatically. 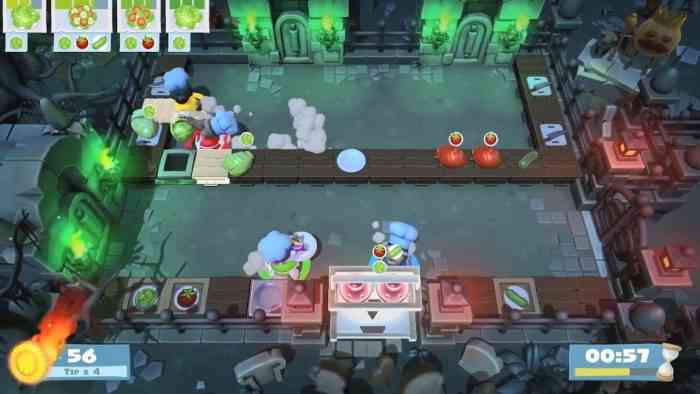 Overcooked 2 will launch on August 7th for Nintendo Switch, Xbox One, PS4, and Steam. The game was announced first for the Switch during Nintendo’s E3 Treehouse Live event. Pre-ordering the game now will net you the “Too Many Cooks Pack” which appears to include five exclusive new chefs: Alien, Walrus, Unicorn, Monkey, and Calico Cat. Switch pre-orders will also receive a sixth chef named Platypus.

An official live stream of the game courtesy of Team 17 will kick off on Friday, June 15th.

Are you excited for more crazy co-op cooking chaos? We sure are!


Video: Marvel’s Avengers is Underwhelming and Uninspired So Far…

Tetris Effect: Connected Exclusive to Xbox and Windows
Next
Let’s Go Pikachu and Eevee Pokeball Plus Bundles up for Pre-Order
Previous
That ‘The Last of Us Part II’ Gameplay Was Real, Says Neil Druckmann